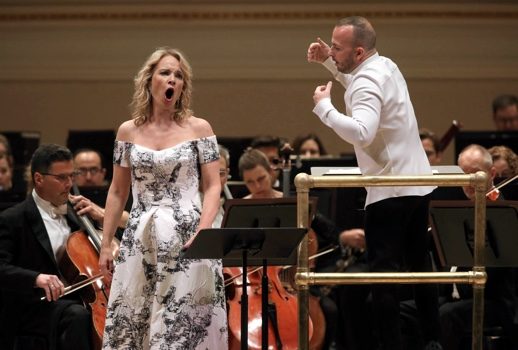 When she recently announced that she had broken a rib, my heart sank: another Elina Garanca Met cancellation! But no, there she was radiantly present at Carnegie Hall Friday night performing a ravishingly somber Rückert-Lieder with Yannick Nézet-Séguin and the MET Orchestra.

Although the Met is the one of the few opera houses Garanca frequents and the only US company with which she appears, she often fails to show up. She has withdrawn from two different runs as Giovanna Seymour in Anna Bolena; Octavian in the final performances of the old Merrill production; and most unfortunately the dreary Richard Eyre Werther which meant Jonas Kaufmann had to instead pine for the opaque Sophie Koch.

Oddy, the Met has become Garanca’s place to say goodbye: we saw her final Rosinas, Angelinas, Sestos and Octavians. I attended her debut in Il Barbiere di Siviglia in early 2008, but in both it and the next year’s Cenerentola her voice though still ably agile had grown too rich for those comic Rossini heroines.

It was then no surprise that she was asked to step into Angela Gheorghiu’s mantilla in the new Carmen late in 2009. Of course it then meant that she had to drop out of that notoriously ill-fated cast that never would be: Anna Netrebko/Garanca/Rolando Villazón/René Pape in the new Les Contes d’Hoffmann.

Although she might not have felt she needed to, Garancadid redeem herself Friday after a bumpy season; her problematic Dalila on the Met’s opening night was followed by an indifferently received Carnegie recital.

Then in the winter she withdrew from her eagerly anticipated first-ever Didon in the new Les Troyens in Paris. As she had cancelled another US-Mahler engagement two years ago with the Los Angeles Philharmonic, anticipation was anxiously high for her debut appearance with the MET Orchestra.

Two years ago the group under Esa-Pekka Salonen devoted some of each of its three Carnegie concerts to vocal works of Mahler, but the Rückert-Lieder was missing. Nézet-Séguin corrected that omission in a season-concluding program that also featured Bruckner’s most popular symphony, the Seventh.

The Rückert-Lieder isn’t a cycle per se in the same way that Kindertotenlieder or Lieder eines fahrenden gesellen are. The five songs simply share the same poet—Friedrich Rückert—but they have traditionally been performed together although the order is up to each singer.

For example, when Kaufmann did the songs at his recital with piano at the Met in 2011, he chose a completely different plan than Garanca who opened with the short and charming “Blicke mir nicht in die Lieder.”

Initially the Latvian mezzo sounded a bit off-form particularly in that first song’s lowest-lying passages but by the magical celesta opening of “Ich atmet’einen linden Duft,” her lush dark caramel voice was enveloping all in the nearly fully-filled Stern auditorium.

While there are those who peg Garanca as a bland, overly cool performer, I have always been in the camp that revels in her subtle serious musicality and indeed that earnest and direct approach made her “Um Mitternacht” a riveting experience in which she carefully crafted each verse and repetition of “Mitternacht” into an involving whole.

“Liebst du um Schönheit” which followed was refreshingly free and conversational before she concluded with a devastating “Ich bin der Welt abhanden gekommen,” perhaps my favorite of all of Mahler’s songs.

Nézet-Séguin began it very slowly with the aching English horn solo ardently evoking the mood of resignation. Garanca then spun out her lines with a heart-stopping. quiet intensity rising to a blissful conclusion spoilt too way soon by an asshole upstairs bellowing “Brava!” before the music had even faded away.

Yeah, buddy, everyone heard you loud and clear! Happy? We weren’t.

I couldn’t find any indication that Garanca has sung Mahler’s Second Symphony but after that final song all I could think about was needing to hear her “Urlicht” or indeed all of Des Knaben Wunderhorn, maybe with Peter Mattei? Someone, please, make that happen!

Unlike some diva-fanciers, I didn’t flee at intermission though Bruckner has never been my thing to the degree that I don’t know much of his non-vocal music at all. I do have a special affection though for the Seventh as it’s used extensively in Senso, Luchino Visconti’s “operatic” film about an amour fou.

I will leave it to a critic from Joe Weider’s Muscle and Fitness magazine to comment on the maestro’s impressively jacked frame, but suffice it to say his skin-tight off-white shirt permitted everyone to scrutinize his arms and back in detail.

Nézet-Séguin led the symphony without either a baton or a score so his was an expansively athletic, even balletic feat even to the extent of distracting from the music. The orchestra responded with sumptuous sound and steady commitment although the brass had moments of unease particularly toward the end of the long work.

I confess that my mind occasionally wandered during the 75 minutes of the Bruckner to ponder Garanca’s recent forays into new repertoire. Upon saying goodbye to her Mozart and bel canto roles she’s taken on more dramatic parts like Eboli and Santuzza while Egypt beckons next spring when she assays her first Amneris in the Canary Islands.

Based on the video, I thought the Paris Eboli in the French Don Carlos a pretty good fit, and she must agree as she returns to the role (in Italian) next season in both Munich and London.

I was more skeptical about the earthy Cavalleria Rusticana but a broadcast from Paris suggested that it too suits her although her taking on these roles will no doubt dismay those who require a more blood-and-guts Italianate approach.

But I’m more intrigued by her stated plans to do Kundry in 2022. During the Mahler I thought how luxurious her “Ich sah das Kind” will be and also how easily a Garanca Venus might seduce any Tannhaüser. And why not Fricka and Waltraute too or even Brangäne—although those roles might not be “prima donna” enough for one of the world’s leading mezzos.

Once I finally got home after the concert (i.e. subway hell) I wanted to listen to her Rückert again and again but, as that was not possible, I dug out a Mahler 3 Garanca did with Christian Thielemann last year and cued up her bewitching fourth and fifth movements on repeat.

I hope when she tackles the Rückert again a broadcast will surface, as well as one when she premieres Elgar’s haunting Sea Pictures next season with Daniel Barenboim.

In the meantime, I can’t wait for her next New York engagement in the Met’s now-concert version of Berlioz’s La Damnation de Faust. Garanca’s Marguerite seduced and betrayed by Michael Spyres’s Faust promises to be one of the season’s highlights.