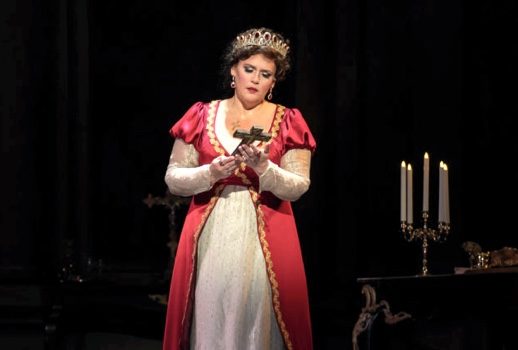 As I sat watching Washington National Opera’s predictably acceptable season-closing production of Tosca with a friend (following a dinner at which an evaluation of the recent, Camp-themed Met Gala and the essay that inspired it was the dominant topic of conversation), it dawned on me why I have never been truly gripped by this ubiquitous piece my “Musical Dramaturgy” professor in Bologna called the “pinnacle of Italian melodrama”: Tosca, as it exists now, can’t be real, spontaneous drama–it’s just Camp.

This is probably not news to many of you, but for me, it illuminated why I have found what some consider to be the genre’s highest achievement to be consistently disingenuous.

Through a combination of music, libretto, and museum-like curation of the opera’s visual palette since its premiere, Tosca has not only become mummified in and as Camp, but seems to exist outside the shrinking standard repertoire of warhorses in terms of the scrutiny we afford it.

A robust performance history and the overflowing number of musical “didascalie” that signal Puccini’s representative achievement have baked into the piece both a lore and performance practice that are unavoidable and instantly recognizable.

However, when we so devotedly adhere to that with the white-knuckled repetition as we have for the past hundred years, Tosca becomes “Tosca” in every revival.

It’s the quotations, Susan Sontag posits in “Notes on Camp,” which connote the affected performativity of routine existence that elevates something to Camp status.

And in the all-too-familiar “Tosca,” other hallmarks of Sontag’s essay equally flourish: the “extravagance” of a gold-hued Sant’Andrea della Valle, the “continual incandescence” of a character intended to exist summarily and equivocally as ‘Diva,’ the “dethroning of seriousness” of Tosca begging off a smooch from Cavaradossi in front of the Madonna with “sweet reproach,” and the opaque “unity, the force of the person” that exists across the hotheaded principal trio. 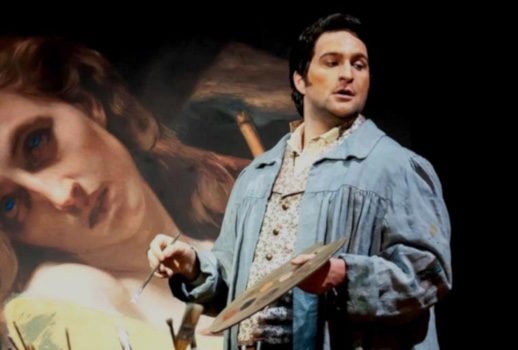 Yet its iconic popularity remains. Why? Sontag provides an answer: “Camp taste transcends the nausea of the replica.”

After eight years of unnoticeably nauseating, interchangeable performances and over half a dozen Florie witnessed, I am still optimistically (but maybe in vain) waiting to see Tosca in italics rather than in quotes. Because in quotations, I don’t find it meaningful at all.

That’s not to say that WNO’s presentation wasn’t remotely enjoyable. In fact, the conducting of the WNO Orchestra by DC debutante Speranza Scapucci was not just better than the company’s standard (which, for conducting, remains low since the departure of Philippe Auguin), but a bold and raucous take on a known quantity.

Scapucci clearly sees Tosca as a bright and imposing cascade of sound, as sexy as it is overwhelming. Her accents promoted an undulating cohesion; instead of turning the opera’s hairpin plot turns into waves, hers was a poetic and choppy sea. The leitmotivs and connotative chords found time to breathe but never at the expense of dramatic swiftness. Hearing such point of view in conducting is rare and refreshing and in an otherwise earthbound performance, it was indispensable.

If the standard was “sexy and overwhelming,” it was not one that proved attainable for the otherwise polished leads. Keri Alkema turned in a very professional Floria with all the usual Tosca-isms (even the ones that came across as less flattering on the earnest if somewhat studied soprano).

Heralded as star of the first cohort of WNO’s Domingo-Cafritz Young Artist Program, Alkema delivered generic but sincere singing (including a very weepy “Vissi d’arte”) and commendable commitment to some unsexy and nonsensical blocking by Ethan McSweeny. It was proof that even if the Program has few (if any) megawatt stars to its credit, the singers it produces are at least quite competent and adaptable. 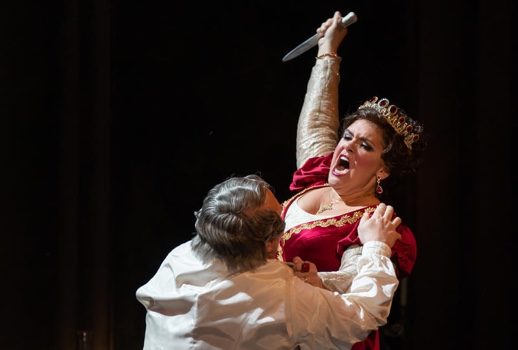 Alkema sang opposite Riccardo Massi, who wields one of those one-size-fits-all Italian tenors in both his timbre and his posturing, as Cavaradossi. And though his well-supported singing was pleasing, an inexplicable lack of idiomaticness fluency with the text left the whole performance (including his two arias, both of which were otherwise steadily delivered) weirdly cold.

Alan Held, as a physically imposing if vocally light Scarpia, rounded out the trio with a dash of spontaneity that was otherwise missing.

In the smaller roles, Wei Wu complemented an authoritative and expansive bass with oodles of personality as the Sacristan and David Cangelosi’s competently sung Spoletta was inexplicably oblivious with every appearance.

Like with many others, this “Tosca” unfolded in realistic painted backdrops (by Ercole Sormani, provided by Seattle Opera) and in Lena Rivkina’s costumes which looked uniformly cheap.

In thinking about my “Tosca” problem, I sought the advice of a friend who recently directed a new Tosca as well read an illuminating interview with Jean-Pierre Ponnelle. On the Tosca he designed for San Francisco (and the futility of reviving any of his works without his oversight at all), he opined, “Productions should not be frozen. Action that makes sense with one singer looks ridiculous with another… Whatever happens, this will not, cannot, be my ‘Tosca.’”

My friend confirmed the Tosca challenge, framing any new staging of the piece as a gradual series of compromises between the audience’s expectations for the piece and finding new ways to communicate its still-relevant themes – she also confirmed that this is not done in revival.

But the revivals, the “being as playing a role” productions of Tosca that more often than not “play the role” of the original production, are how we most often encounter most repertory pieces. I look forward to the day that “Tosca” might dependably transcend its trappings and ground its pathos in its sincerity and not in its precedence.

But as I sat again in the 21st century trying to take seriously what is certainly the most cheapened, genericized title in the repertory, in a revival resultantly lesser than the sum of its parts, I could not help but agree with Scarpia himself: “Mai Tosca in scena più tragica fu.”