There will be bloom

In the more than 500 years of the history of operas, rarely (if ever) has a coming of age story, particularly one from the child’s point of view, been presented as the main topic of the opera. 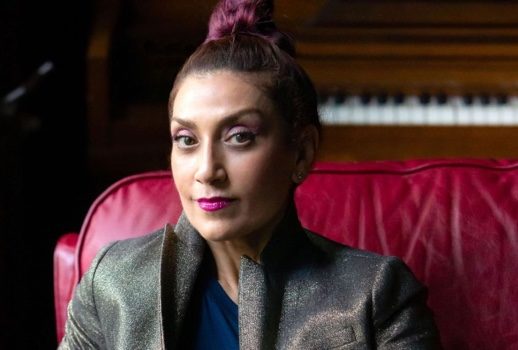 In the more than 500 years of the history of operas, rarely (if ever) has a coming of age story, particularly one from the child’s point of view, been presented as the main topic of the opera. That was changed with the arrival of a new allegorical opera Abraham in Flames, which received its world premiere on Thursday 5/9 at Z Space.

Talebi drew the inspiration for the opera from “the staggering imagery in iconic Iranian poet Ahmad Shamlou’s life and poetry” and from her own upbringing in Tehran, where Ahmad Shamlou (1925-2000) was a frequent guest to her parents’ literary salons.

She recently also released her memoir “Self-Portrait in Bloom”. The title was borrowed from Shamlou’s 1974 book of poems, where he used the biblical story of Abraham who withstood a trial by fire as metaphor for those who fought for and sacrificed their lives for their truth.

In an interview with Operawire, Talebi described the creation process of the opera as follows.

I have adopted that notion to explore the purity each of us starts with and the choices we must make swayed by Fear versus our sense of Knowing and our desire for Happiness, all tugging at our human hearts. The opera is set up somewhat as a medieval morality play, and the young women’s chorus who plays the lead character in the opera, singing the role of Everygirl, confronts having to make a life choice. The opera is about the trials of fire we humans endure in our journey to become truly ourselves. I endured a trial by fire during the creation of the opera and book, which fed into the overall concept.

Inspired by a question Talebi’s father asked her when she was a girl, about who she really wanted to be, the girl in the opera is struggling to be authentic. She is pushed, pulled, and taunted, provoked and challenged by the five soloists in the opera: Angel, Poet, Fear, Knowing, and Happiness.

There lies the biggest pièce de résistance of the opera, the use of a girls’ choir as the lead character. As far as I’m aware, this is the first time it’s ever been done before (Please correct me if I’m wrong!) This was actually my main motivation to catch this world premiere, besides the fact that the opera is written by a female composer and female librettist, a very rare occurrence in a world dominated by male composers/librettists.

Talebi described Vrebalov’s music as “a combination of rock ’n’ roll, with a little bit of Balkan, Middle Eastern, and classical” and to my ears, there was a lot of truth in that. Her music sounded inward, almost spiritual, and there were times that it reminded me of the music of Alan Hovhaness, particularly in his “murmur” sound for violin.

Vrebalov’s treatment for voice was melodic and tuneful, albeit pretty repetitive, as each sung phrase was repeated over and over again. However, I did love her choral writing for the girls’ chorus, as it was divine and very representative of the emotional turmoil that the character went throughout the whole opera.

Additionally, I also enjoyed the constant change of mood in the accompaniments and the various special effects employed (as provided by the excellent contemporary chamber-arts duo The Living Earth Show). Here’s a clip of the girls’ chorus.

Obviously, having a chorus as a lead, particularly in an allegorical opera like this, poses a great challenge to the director, and I think Rallo excelled himself in bringing this opera to life, ably supported by production and lighting designer Heather Carson and costume designer Christine Crook.

The set was a bare black square highlighted by a strip of lights on all four corners, and the audience was placed on chairs (and for those coming later, on the floor with cushions) surrounding the set. Screens were placed above each side, and they were used to project the texts, colors and, later on, videos (more on this later).

When we entered, the girls were already populated the stage, and they would never leave the stage until the opera ended. To be honest, I had my doubts in the beginning, especially since they started by walking aimlessly in that space while they sang, but by the end of the opera, I was fully convinced that there was no other better way to represent this character.

I loved the trajectory of the placement of the girls on stage; from messy and sporadic to a united front at the end of the opera, as if to represent the Girl character got wiser and more in control of her thoughts!

The “adults” of the opera – Angel, Poet, Fear, Happiness and Knowing – were all given distinctive characters in the production, to identify and differentiate them from the girls.

We had seen from the interview above what Talebi intended for Fear, Knowing and Happiness, and here they turned into, respectively, an overbearing mother with shopping bags, a dark conscience popping up everywhere and a child-like playing with snow.

The Poet, who was definitely designated to be Shamlou in Talebi’s life, was given the grandest entry of all. She turned into a personification of the Tree of Life that gave tree branches to each girl, and later on, she even stood high above a bench protecting the girls!

I was baffled with the last “adult” role, the Angel, both as a character and how it was portrayed on stage. He sinisterly sang over and over again, “Would you be dim and happy, or knowing and suffer?” pretty much the whole time, while dressed by red hood covering his head and red cloak, resembling Red Skull from the Avengers movies.

I was confused about his presence and his labeling “Angel”, as to me he was more of an agent of chaos, and the staging seemed to reinforce that notion since he was often seen with Fear.

One aspect of Rallo’s direction that was truly appealing to me was his use of colors, both in the costumes and in the lighting. The girls were all in white costumes. When they sang, the screens above the audience turned white as well, or at least showed their texts in white. The arrival of Angel, all decked in red, covered the screens in red and the stage was also bathed in red lighting.

Similarly, Knowing, Poet and Fear were associated with black, green and red (again), both in costumes and in the screens, respectively. The entrance of Happiness represented the most magical moment in the opera to me; it almost felt like a homage to Snowflakes scene in Tchaikovsky’s The Nutcracker. Dressed like a kid also in white, Happiness pranced around the stage leading the girls while they threw white cut papers to resemble snow.

Halfway towards the show, the screens started to show clips of real-life challenges that the Girl faced; from being bullied, schools, exams, teachers, etc. While I understood why, personally I felt like it created a rather jarring transitional effect from being purely allegorical to the inclusion of real life. Not to mention, it also split the audience’s attention from the happenings on the stage.

Another minor nitpick was the final scene, where after a thunderous moment with everybody singing, the opera ended with the girls gathered in the center singing the final words softly, creating a rather anticlimax for me. It didn’t help that on opening night, some of the girls didn’t turn off their individual lights at the end, so it created confusion to the audience whether or not the opera had ended. However, those two were minor details after such an epic performance!

The star of the show was undoubtedly the Young Women’s Chorus of San Francisco, directed by Susan McMane, who in unison truly embodied the Girl character. They worked really hard for the show, and their enthusiasm and energy brought the opera to different level.

They sang like angels and they acted physically and even showed in their faces. I wasn’t surprised that in that SFCV article above, Talebi mentioned that many of the girls told her how meaningful the libretto to them. I could definitely see it in their performance.

They were all uniformly excellent in their roles. Belongie made a sinister Angel, and he navigated the long coloratura passages well (pity about the hood though). So was Einfeld as overbearing Fear (one more trait that both Angel and Fear shared); it almost felt like the girls were scared of her!

Rapier gave a commanding presence to the Poet, doing full justice to this dignified role. Metzger, fresh from another world premiere of Kirk Meachem’s Pride and Prejudice last month, underwent similar emotional curves as the Girl, and he darkened his voice sufficiently as he was in distress (marked by his change into yellow jacket). Eichelberger let the Knowing role being present with his booming bass voice.

Abraham in Flames was scored quite modestly for 6 instruments (clarinet, accordion, cello, violin, electric guitar and percussion), but it never felt sparse thanks to the excellent direction of Stefano Flavoni, who led the reading in exciting manner. In fact, there were times I felt like I was listening to much bigger orchestra!

In conclusion, this was an amazing achievement for everybody involved, and truly a worthy addition to the opera world. I surely hope that it will travel and reach more people, as the message is very current and important in today’s environment. In fact, I do hope more young adults will hear this, as I’m sure they will relate a lot to the opera as a whole!