Amore Opera, one of New York’s smaller opera companies, is presenting the first local run of Dinorah, ou le Pardon de Ploërmel since before the war. 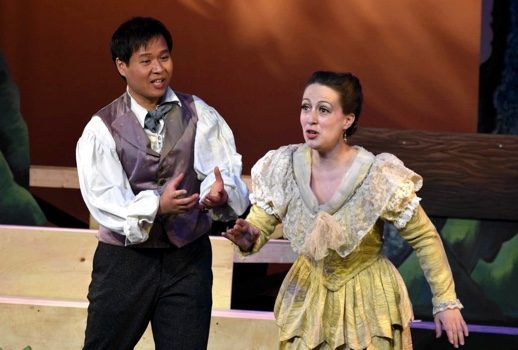 Joy and mental sanity reign at the end of Dinorah for Suchan Kim and Holly Flack.

Meyerbeer’s name, when remembered at all, is synonymous with folies de grandeur, a veritable Mercedes Benz (or, more likely, Hispano-Suiza) of old-fashioned operatic vehicle.

His very grand epic operas held the stage for nearly a hundred years around the world before lack of novelty and sheer expense expelled them. That grandeur also kept them obscure: who can afford to produce a very chancy “night of seven stars”? and who can afford the tickets if it’s produced?

But Meyerbeer didn’t only write in limousine touring-car mode. There are lighter works in his oeuvre. Amore Opera, one of New York’s smaller opera companies, which would be very unwise to attempt one of the big bad epics, has not done so, but is presenting the first local run of Dinorah, ou le Pardon de Ploërmel since before the war. The Spanish-American War, possibly.

Dinorah was Meyerbeer’s penultimate stage work (I never miss an opportunity to use the word “penultimate”), an opéra-comique of 1859. By the time his last opera appeared, L’Africaine, in 1865 (nowadays usually called Vasco da Gama), the gentleman was dead. Dinorah had quite a vogue and one palpable, much-recorded hit: the Shadow Song, “Ombres légères.”

It was not difficult last night to understand the opera’s erstwhile popularity, at the first Amore Opera performance at the Riverside Theater (on Claremont Avenue in back of Riverside Church): Dinorah brims with terrific tunes and theatrical effects.

With a first-rate coloratura soprano (especially a pretty one who can dance while trilling—hey, this is opéra-comique, guys), a decent baritone and an adorable buffoon tenor, the piece was catnip for Parisian sophisticates and those in other cities who aspired to seem Parisian. In 1859, that was everybody, everywhere.

The problem is the book. Back then, they loved operas set among naïve country folk, whose piety, superstition and buffoonery—let us assume these are different things—made them enchantingly credulous. Operas like La Dame Blanche and La Sonnambula and La Gazza Ladra succeeded accordingly.

The operatic equivalent of Beverly Hillbillies or Green Acres. But these stories don’t play so well nowadays. We don’t get why people who believe old legends of buried treasure (and the death of the first person who touches it) are funny.

I loved nearly every musical number in the show, and winced at almost every line of the (much shortened) dialogue. Perhaps performing the airs in French and speaking the dialogue in English was a mistake. If the dialogue had also been in French, we’d have understood less of it, a happy circumstance.

There’s a delectable duet for baritone and tenor, singing the same melody just off unison. There are several trios for characters who have little reason to be singing together except that the melody sounds wonderful when harmonized. There are distant bell effects and the usual drinking chorus.

Time passed very prettily—a great deal of time—for Meyerbeer, brevity was not the soul of wit. But hang on, ignore the story, wait for the tunes.

Too—this must be said—Meyerbeer was composing for Paris at a time when the orchestras playing for opera in that city were the finest on earth, and he took full advantage.

There are storm effects, supernatural effects, a religious procession or two and obbligato bagpipes or reasonable facsimile. Rick Cordova’s orchestra at Amore didn’t have the strength or, one suspects, sufficient rehearsal time. The string section was often painful to hear, but should improve. (There are two more performances on Saturday.)

And then the voices came in, and you forgot the plot in delight at the music, and what decent voices could make of them.

The heroine, for instance. Her greedy and superstitious fiancé has abandoned her at the altar and she has gone mad, of course—but instead of locking herself up for 30 years with the wedding cake like a normal person, she has gone wandering through the hills chasing a lost goat.

Casting the goat is one drawback to performing Dinorah at all. Amore has chosen to give the role to small children in fluffy goat costumes. Dinorah should be pretty, a pretty good singer, and capable of dancing with her shadow.

Keep your eye and ear on Holly Flack. She’s easy on the eyes, she can dance and act and say ridiculous lines with total conviction.

But the voice! An even, flexible, beautifully produced soprano, more womanly than the “canary” type, with excellent voice control, a genuine trill and a remarkable range, up to an A-flat in alt. Yes, you read that correctly: she knocked the house agog with an A-flat, not an ordinary D-flat, to conclude the Shadow Song.

Hoël, her morally compromised fiancé, was sung by Suchan Kim with a solid, burnished baritone that made its effect in the many ensembles. Juan Hernández contributed a pleasant tenor as the cowardly bagpiper, Corentin, whose antics are meant to carry the scenes and build the atmosphere.

Lou Costello—that’s who we need for this role—someone contemptible but inevitably funny. Hernández spoke his lines clearly and stayed out of everyone’s way, but he evinced no other qualification for the stage. Even if his lines had been funny, he would have deflated them. He made a long night seem so much longer.

A coloratura makes Dinorah fly—in years to come, having heard Miss Flack in the role will give one bragging rights—but a bad comic will not do in an opéra-comique.

Ah, but the score. The score is so good that I’m going back tonight to see how the other cast handles it. Tickets, I’m told, are flying out the door like mountain goats in stampede. That leaves Saturday’s two performances for you.