Hearing Lucas Meachem perform Kindertotenlieder in the crypt of Harlem’s Church of the Intercession was a heart-warming, and ultimately uplifting experience. 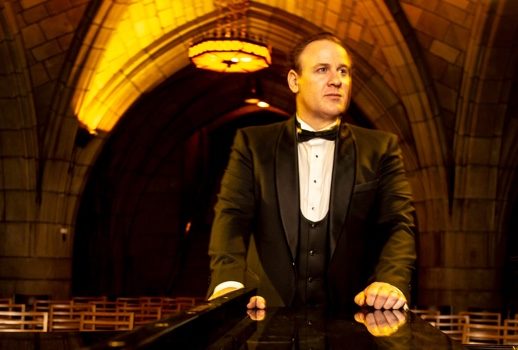 On paper, the prospect of hearing Kindertotenlieder in a crypt is a macabre one: Rückert’s poems alone are a harrowing read, a cry of anguish over the premature deaths of the poet’s two children, and Mahler matches the torment of the text with some of his most gut-wrenching, and indeed, most beautiful music.

Yet hearing Lucas Meachem perform the cycle in the crypt of Harlem’s Church of the Intercession was a heart-warming, and ultimately uplifting experience, the singer bringing a welcome tenderness to Mahler’s cycle.

One of the upsides of using a crypt as a performance space was the intimacy that came with the confined space, along with the beguiling ambience afforded by the vaulted ceilings, stained-glass windows, and flickering candles. The downside, however, was the near-deafening acoustic, which, when paired with a voice as powerful as Meachem’s, made for an evening of ear-splitting fortissimos.

While, at first, this sheer volume was exhilarating, after a while, the raw decibels made it difficult to hear Meachem’s vocal nuances, the timbre of his voice swamped by the blare.

Meachem began his program with a hefty dose of opera. “Le calme rentre dans mon coeur” from Iphigénie en Tauride was a rousing start to the evening, Meachem digging into Gluck’s recitative with golden-voiced bravura.

While the gutsier phrases had a beguiling richness, his tone slipped a little in the softer moments (especially on the so-called e instable vowel, a challenge for many interpreters of French-language song).

Meachem made up for this with an exquisite performance of Onegin’s aria “Kogda bï zhizn domashnim krugom” from Eugene Onegin. Although this aria is notoriously wordy, Meachem never allowed this get in the way of its lyricism, bringing a cooing finesse to the aria’s softer moments.

Hot off the heels of Meachem’s electrifying performance as Robert in the Met’s Iolanta, it was spine-tingling to hear him tackle Tchaikovsky at such close quarters, Meachem proving himself an expert interpreter of this repertoire.

Meachem closed the opera segment of his program with Figaro’s entrance aria “They Wish They Could Kill Me” from John Corigliano’s The Ghosts of Versailles. Meachem portrayed the ageing Figaro with an uproarious mix of grouchiness and virility, bellowing through Corigiliano’s high-camp thrill-ride as if it were “Largo al factotum” on crack.

I was already familiar with this aria from Meachem’s own (sensational) performance on LA Opera’s recording of the opera (which won a Grammy in 2017); however, there was no way I could have predicted Meachem’s zany choreography, the aria’s musical tongue-twisters paired with a series of cartoonish gestures, culminating in a frantic macarena.

Even Irina Meachem, Lucas’ wife and accompanist, joined in the buffoonery, rapping on the side of the piano to imitate the debtors knocking on Figaro’s door.

After the buoyant frivolity of the Corigliano, a selection from Copland’s Old American Songs bought the program back down to earth. Here, Meachem’s performance felt a little too heavy-handed for the restraint and simplicity of Copland’s arrangements, the pianissimo in “At the River” a little too hushed, the forte of “Walls of Zion” a little too brassy.

However, Meachem did imbue Copland’s songs with plenty of drama and energy (especially in the calls and echoes of “The Boatman’s Dance”), never allowing the songs slip into folksy schmaltz.

By the time Kindertotenlieder arrived on the program, the evening had been relatively high-spirited Meachem was a vibrant raconteur, peppering his program with a range of charming anecdotes, delivered with the flair of a Vegas showman and the candor of a gossipy relative.

While a move into more somber fare could have dampened the mood, Meachem sang Mahler’s cycle with such warmth and nuance that it did not seem incongruous after his more light-heartednatter.

In the chromatic labyrinth of “Nun will die Sonn’ so hell aufgeh’n,” Meachem drew on a broad timbral palette befitting the light/dark dialectic in Rückert’s text, while in “Nun seh’ ich wohl, warum so dunkle Flammen,” Meachem displayed remarkable control in the extremes of his range, crooning through the unexpected shift to D major with heart-rending sweetness.

Meachem approached the plodding strains of “Wenn dein Mütterlein” with staunchness and grit, but allowed himself more room for expressivity in Mahler’s longer, sighing phrases. “Oft denk’ ich, sie sind nur ausgegangen” brought some of the finest lyrical singing of the evening, capturing the rhapsodic optimism of Mahler’s setting.

After roaring through the musical storm that opens “In diesem Wetter, in diesem Braus,” Meachem led the cycle to a transcendent close, floating through the final phrases with sweetness and delicacy.

Irina Meachem often blurred together Mahler’s harmonies a tad too much, losing some of their textural clarity; however, in the cycle’s meditative coda, a more transparent touch made for a particularly luminous ending.

Meachem finished the evening on a much cheerier note with two crowd-pleaser encores, “I Can’t Help Falling in Love with You,” and “Oh Shenandoah,” performing the former with a lounge-singer swagger. That Meachem appeared equally at home in 1960s pop kitsch as he did in Mahlerian high romanticism was a testament to an artist who brought charm and vigor to all the music he sang.