The old song and dance 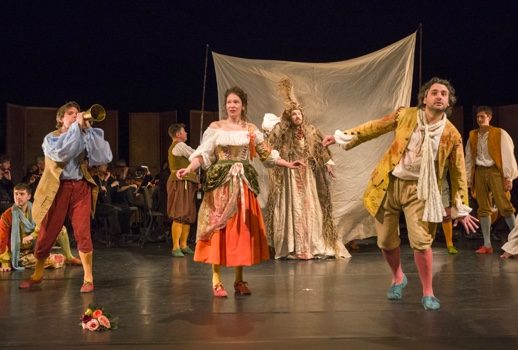 If being stuck in an emergency room past 1:30 AM wasn’t bad enough, my injury happened heading home from the most disappointing performance in 30 otherwise glorious years of William Christie and Les Arts Florissants visiting New York City.

Admittedly the two works—Daphnis et Églé and La Naissance d’Osiris—which made up the program Rameau, mâitre à danser that opened Friday night at the Brooklyn Academy of Music are among the composer’s slightest, but never before has the august French early music group presented anything here so weakly sung and under-rehearsed.

Sophie Daneman’s simple and pleasant production sought to make a unified entity by transposing the lovers of Daphnis et Églé which opened the evening into La Naissance d’Osiris.

But both of these charming episodes were surely meant to be performed in venues much more intimate than the 2000-seat Howard Gilman Opera House.

Rather than performing in a pit, the orchestra was placed far back on the stage peeking out from under a slightly raised heavy black curtain while the singers and dancers frolicked in front of them on a mostly bare stage. This arrangement proved most disadvantageous during Daphnis when the orchestral sound was consistently muffled.

That situation improved in La naissance but perversely coordination problems with the singers and orchestra increased.

Gilles Poirier’s choreography which had been restaged and retouched from the late Françoise Denieau’s original created five years ago was sweetly captivating but more than once his six dancers were out of sync. Even so, they appeared less erratic than the usually impeccable LAF period-orchestra which for the first time in my hearing often sounded thin and pinched, particularly the oboes and violins.

Audiences were given the unusual chance to experience a musette,the rare bagpipe-like instrument often used by Rameau to evoke a pastoral atmosphere but it was nearly inaudible during Daphnis. Happily, François Lazarevitch, its suave player, entered directly into action during La naissance and was thus easily heard.

The smoothest of the vocalists had the least to do: both basses, Cyril Costanzo and François Lis revealed commanding and resonant voices while tenor Sean Clayton easily piped out his few lines.

Pristine-voiced soprano Élodie Fonnard, like several of the others a veteran of the LAF young-singer training program “Le Jardin des Voix,” entranced as Églé and brought out the best in her partner, haut-contre Reinoud Van Mechelen as Daphnis.

I’ve enjoyed this Dutch artist’s singing on many recordings and broadcasts of this specialized repertoire for the past few years but he seems to be going through a bad patch lately.

Van Mechelen’s Hippolyte in Rameau’s astonishing first opera seen late last year in a webstream from the Berlin Staatsoper was uncharacteristically wan and tentative while his Daphis Friday evening turned heavy when it should have been light and he labored inelegantly through his florid ariette.

Soprano Magali Léger whom I first heard sing Rameau 15 years ago in Lyon produced the ugliest sounds I’ve ever heard in a performance led by Christie, who always strives for both vocal beauty and linguistic and dramatic purity.

If she improved slightly after intermission, her singing was still so sub-par that the da capo of her showpiece aria “Règne amour” was mercifully omitted—an unexpected slice coming in a Christie show. I later checked out Léger’s Amour/Pamilie on the 2014 DVD available of these pair of works and she was spiritedly substandard even then. Why she was re-invited five years later was just mystifying.

Yet there were a few moments of Ramellian magic, especially when the polished chorus sang but I couldn’t help but think back to the eight (!) previous Rameau operas LAF has brought here.

They were among the most compelling and intoxicating evenings I’ve ever experienced in a theater: Castor et Pollux, Les Indes Galantes, Hippolyet et Aricie and Les Boréades, just to name their most memorable Rameau appearances at BAM.

I’ve been listening to those four (on CD—the audio recording of Indes Galante is superior to the video from Paris–and DVD) rather than reflecting more on Friday’s disheartening outing as I attend to my wrecked knee.