Sondra Radvanovsky returned for her 29th Met Aïda Thursday night (but only her second Aïda.) 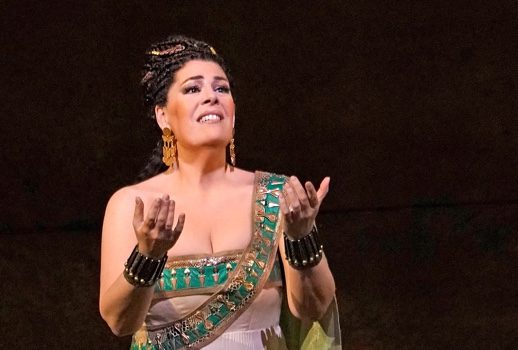 Sondra Radvanovsky returned for her 29th Met Aïda Thursday night (but only her second Aïda) so history could repeat itself: she and exciting mezzo Olesya Petrova—like Anna Netrebko and Anita Rachvelishvili five months earlier—demonstrated that extraordinary women sometimes spend their lives obsessed with a man unworthy to kiss the hem of their stylishly twirled capes.

After an extended and variously successful sojourn into bel canto and verismo Radvanovsky’s coming back to Verdi was heartily welcomed by me as well as her cheering audience. Since debuting as Rigoletto’s Countess Ceprano in 1996 she has become one of the leading Verdi sopranos in a world where there aren’t so many to begin with.

Eleven more roles by the Italian master have followed at the house, including some 27 outings as Aïda’s off-stage Priestess but as much I admired aspects of, say, her Norma or Maria Stuarda, I’ve remained most eager to hear her back communing with Joe Green. Thursday’s Aïda was our first mutual Verdi encounter since Un Ballo in Maschera in late 2012.

I’ve been lucky enough to hear nearly all her major Met Verdi roles except for Luisa Miller (a role to which she finally returns this summer in Barcelona) and Violetta which she did only in the parks, both in 2001. Through pitch problems and awkward dynamic control to technical mastery, we have journeyed together from Elena and Elisabetta to Elvira and Lina to Leonora and Amelia, the latter pair her most important Verdi successes.

I remain saddened by the painful cancellation of her Leonora in La Forza del Destino, a work the Met hasn’t done since 2006, but I haven’t yet given up hope. I’ve also heard whispers that Radvanovsky will soon head to Verdi’s Scotland although perhaps not at the Met

Her startlingly regal, pale(-complexioned) Ethiopian princess was, until her very last moments on earth, the unhappiest girl in Egypt. From her downcast entrance one was struck by how her life was riven by both slavery and forbidden love. Yet Radvanovsky only occasionally used the well-known slashing harshness of her voice as a cri du coeur revealing her pain—most vividly in the gripping duet with her father, portrayed by an almost too mellifluous Quinn Kelsey. 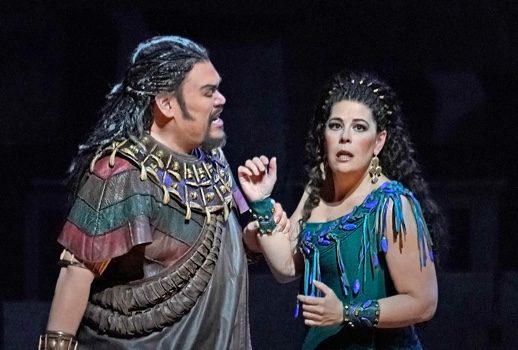 More often though she seduced us—and that lump Radames—with silken phrasing and heaven-sent pianissimi. If that treacherous ascent to the dreaded soft high C went slightly awry, “O patria mia” otherwise magically conjured a heart-stopping nostalgia for a happy past never to be regained.

Yet her awesome vocal amplitude was never in doubt particularly as she soared thrillingly over the assembled masses at the climax of that surefire crowd-pleasing Triumphal Scene: she was not going to let a recalcitrant horse (the second at the Met in a week) steal the show!

If it was difficult to imagine her stolid warrior-lover—portrayed with an occasionally effective braying bluntness by Jorge de Léon—could inspire the ultimate in self-sacrificial devotion, Radvanovsky had a much more worthy partner in the unusually youthful and vulnerable Amneris of Petrova.

The Russian mezzo hadn’t made of an impression on me last season as Federica in Luisa Miller (can anyone in that ungrateful role?), but as the insecure and jealous Egyptian princess she brought a refreshingly subtle approach to a character who can sometimes come across as a charmless harridan.

Initially it seemed as if Petrova might be overparted as Amneris in a theater as big as the Met. Her chest voice didn’t shake the walls but it was present—and effective–and grew more potent as the evening progressed. The trio of besotted responses to the chorus early in the scene in her boudoir were softly suffused with intoxicated desire while her sly questioning of Aïda proved deviously effective. 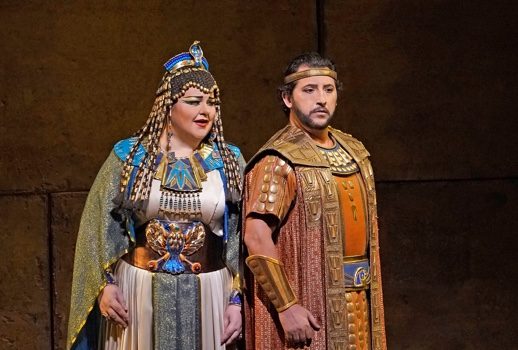 The all-important Judgment Scene burned fiercely with doomed hope but won an unexpectedly muted ovation although her curtain-call was more appreciatively greeted. Although she is absent from the Met next season, I will be eager to hear her glowingly warm and evenly produced mezzo again in other Italian and perhaps Russian roles at the house in the future.

Besides the crude de Léon and fiery Quinn Kelsey, Solomon Howard made a vital King easily overshadowing the wobbly, watery Ramfis of Stefan Kocán. During those many Aïdas in the late 90s I wondered if any who heard Radvanovsky’s Priestess imagined she’d eventually become an important Verdian? I had a similar thought last evening when an arresting offstage Leah Hawkins compelled me to pay special attention during a scene I usually can’t wait to be over.

More times than I can count I was saddened that Radvanovsky and Petrova were hindered rather than helped by their clumsy conductor, the “great” Plácido Domingo. The ersatz baritone has now led over 150 opera performances at the Met since 1984 and this was his 17th Aïda but I suspect it wasn’t much better than his first 21 years ago.

The usually sterling Met orchestra sounded slack and imprecise and he was often either behind or ahead of his singers. The continuing hubris of Domingo’s mostly over-extended career remains discouraging. Why do so many the opera houses continue to enable it? Perhaps because an adoring audience still loudly bravos him—as it did last night.

I don’t often seek out Aïda, but I attended the premiere of this production in December 1988, the only time I ever saw Fiorenza Cossotto and the last time I saw Leona Mitchell. It has served the house well for nearly 250 performances over the past three decades. These three shows will be the final ones for those monumental Gianni Quaranta sets before they are jettisoned for a new staging by Michael Mayer of recent gold-encrusted La Traviata fame: I’m scared, are you?

Just two remain and anyone hungering for fine Verdi singing—and who isn’t—should definitely try to catch Radvanovsky and Petrova. Happily, their final performance on 7 March will be streamed free via the Met’s website.