Let’s hear it for the boa 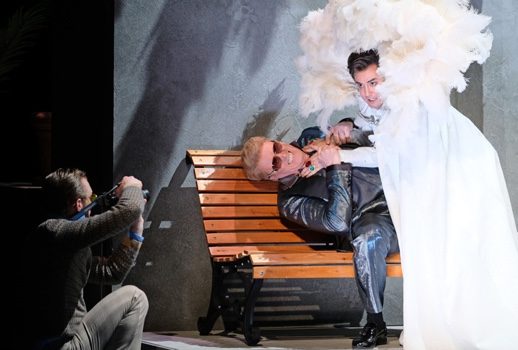 That certainly applied to Handel’s 1738 opera Serse, the anchor opera for the 42nd Internationale Händel Festspiele Karlsruhe 2019, that opened on Friday, February 15 and was seen on the 17th.

The Vegas-themed show was the brainchild of Croatian countertenor-turned-director Max Emanuel Cencic, his second production at Handel Festival Karlsruhe after 2016 Arminio, and in both cases he sang as well (title role in Arminio, and Arsamene here).

The opera Serse was a complete failure at its premiere, for the same exact reasons that make is so alluring modern operagoers; Handel included many comic moments into the opera, confusing the 18th century audience, and he eliminated may of the long three-part da capo arias and substituted short one-part arias.

The dramatic theme is also much lighter and playful, mostly revolved around love and jealousy, compared to many of his earlier opera serias; there is barely any politics, murder, or magic involved. In essence, with Serse, Handel just wanted to have fun.

And fun was exactly what director Cencic had in mind for this production. This definitely wasn’t the first Vegas-themed staged operas; Michael Mayer had already thought about that in his Rat-Pack Rigoletto currently playing at the Met.

However, while Mayer’s Rigoletto could feel superficial at times, Cencic fully embraced the ideas to the core, turning the opera into a homage the “King” of Las Vegas, Liberace. Not content with just that, he also set the tone of the staging as raucous, loud, hypersexual and vulgar; pretty much everything that Vegas embodies.

Cencic’s vision could be felt from the moment the curtain raised after the overture; we were right smack in the middle of “The Liberace Show” – oops, “The Serse Show” – featuring a grand piano with a candelabrum on it, Vegas dancers in shimmering clothes and boas, even including audience on stage.

Most prominently, Rifail Ajdarpasic’s set for this scene was a faithful homage to the finale of Steven Soderbergh’s 2013 biography movie Behind the Candelabra.

The opera focused on Serse the Entertainer. Costume designer Sarah Rolke made sure that Serse’s clothes all came directly from Liberace’s wardrobe. There was no tree whatsoever for the famous arioso “Ombra mai fu,” as it now became Serse’s opening in his show.

In a way, personally I thought it worked better this way, as I always found that customary staging of singing to the tree was rather cringeworthy. Arsamene, too, was clearly modeled after Liberace’s brother George Liberace, with his trademark mustache (although personally I think Cencic’s Arsamene resembled pornstar-turned-comedian Ron Jeremy the most).

In Act 2, I felt that Cencic stretched his interpretation a little bit too far by setting it in (supposedly) seedier part of Las Vegas that more resembled Amsterdam’s famed red-light district. In the center of the stage there lied the gay bar “Tom of Persia” (presumably a cross between Tom of Finland and Prince of Persia), where leather gay men visibly went in and out to have (simulated) sex, almost throughout the whole Act 2.

Next to it was the “Babylon” sex shop with floor-to-ceiling window where a female sex worker was waiting for clients. Against that backdrop, Elviro, in full drag getup, sold his “flowers” of drugs. It was all felt just a bit much, distracting from the important scenes where Amastre learned the love triangle, and Atalanta’s deception.

Interestingly though, when Arsamene first appeared, he didn’t come out from the predictably “Babylon”, but rather, “Tom of Persia”! (Bad dog, Arsamene!)

Intriguingly, Romilda’s bedroom was placed right above “Tom of Persia” and the whole time during those scenes she was dressed in naughty lingerie. That fact, and together with Cencic’s updated English translation that called her “courtesan” in Act 1, raised the question of who Romilda really was in Cencic’s vision. 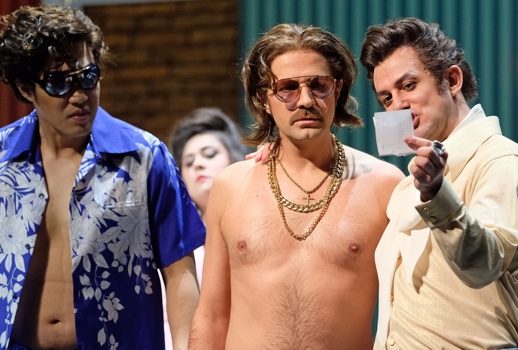 The farce reached its apex during Serse/Romilda duettino followed by “Se bramate”; at this point Serse was shown taking drugs to have sex with Romilda, only to crash before the deed was done!

And what is more Vegas than wedding chapels, right? Here as well, the Act 3 was set at a wedding chapel. Pity that they missed having Elvis as the officiator! The only sign of distress in this production was when Serse learned that he had been tricked, he wielded guns at the chapel, threatened to kill Arsamene and Romilda.

In the end, as the chorus sang the final “Ritorna a noi la calma”, Serse was shown to be taken away by police. My opera buddy and I had some discussions of what that scene translated into meaningfully, as to him it meant that Serse was no longer in power to forgive Arsamene and Romilda and to restore “calm and peace” as sung by the choir.

While I applauded Cencic for thinking the whole opera through with his take, I had to say that staging it this way stripped the opera from its tragic/serious elements, and made the audience less inclined to empathize with the plight of the characters. In a way, it made the picture only halfway complete, as Handel was careful to address both sides of the story throughout the opera.

What really elevated the performance that I saw was the musical content and the commitment shown by all the performers. Superstar countertenor Franco Fagioli, who was just recording the whole Serse with Maxim Emelyanychev a few months prior to this was an ideal Serse; he took his Liberace-inspired title role very seriously.

As a divo playing divo, he was not always clear in differentiating how many of the mannerisms were directed by the director, and how many were hie own. Nevertheless, he was riveting to watch on stage.

Unfortunately, he was in fresher voice during the previous recording, and that performance, I detected some worrisome strains at the top. This was rather surprising to me, as Faglioli was famous for his effortless high notes. Still, he brought down the house with his rendition of the rage aria “Crude furie degl’orridi abissi”.

I feel like every time I heard Cencic, his voice keeps getting darker.  Here it sounded like expensive dark chocolate, smooth and velvety. Arsamene’s arias were mostly slow and somber, but he did make a spectacle out of “Sì, la voglio e l’otterrò!”, complete with flipping the bird at the end of the song! 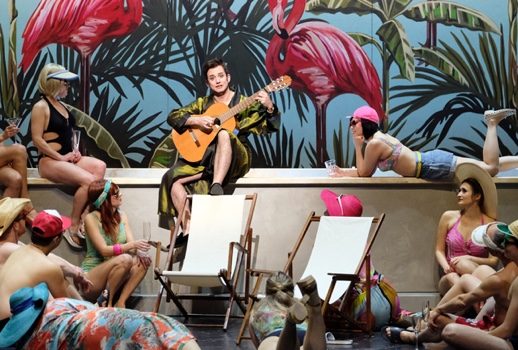 I first heard Lauren Snouffer in 2016 Arminio, but I wasn’t too impressed at that time. She had improved tremendously since then. Her bright, lyrical soprano sounded rich and full, and she was brimming with confidence as the love interests of the two brothers. Likewise, Pavel Kudinov too had made significant impression on me since Arminio with his convincing portrayal as Romilda’s father, Ariodate.

Katherine Manley’s dorky Atalanta was dressed like a sexually-frustrated librarian; she too sang well and had a great comic timing, whether while stabbing voodoo doll in “Sì, sì, mio ben, sì, sì” or while forcing men to do conga line with her in “Un cenno leggiadretto” that ended Act 1.

Amastre is a role who tends to make a star out of whoever sings it, and newcomer Ariana Lucas that night was no exception. Here Cencic assigned multiple roles – both men and women – to her, from fornicating with Serse during the Overture to being a spy and a janitor; and Lucas performed them with gusto.

Her dark contralto voice had some considerable volume, and I can’t wait to hear her tackling other contralto roles.

Yang Xue’s Elviro differed from the regular naïve guy that Elviro usually portrays, as here he was more like Arsamene’s friend than his servant. His drag-queen drug-dealer persona in Act 2 was a riot, and he sang confidently with booming voice.

Needless to say that I loved the conducting of George Petrou, who led Deutsche Händel-Solisten in an energetic reading that matched the hijinks happening on the stage. I have admitted on this blog before that I am a big fan of him and I travel to hear him conduct Handel’s operas.

While I personally preferred his conducting his own period-instrument band Armonea Atenea, which to my ears gelled together better and had more distinctive sound on Handel’s scores, this exemplary conducting by Petrou bodes well for when he takes over as artistic director for Göttingen International Handel Festival beginning of 2021/22 Season.

I was definitely aware that this staging was not for the purists; for them I would suggest  Stefan Herheim’s production. But even that staging was not in the correct costumes, and it was in German!

However, I strongly believe that every production of an opera eventually must be judged in case-by-case basis, by the enjoyment that it gives to the audience watching it. For a production that will stay in Karlsruhe for just two seasons, and judging from how much fun the cast had and the long standing ovations that this production received, I would say that this was a complete success for Petrou, the orchestra, all the singers, and particularly for Cencic!