Barbara Hannigan's electrifying performance with the Juilliard Orchestra on Friday night proves that she is as much a force to be reckoned with on the podium as she is onstage. 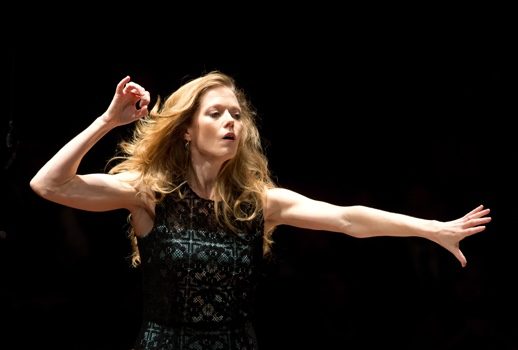 New Yorkers will be very familiar with the voice of Barbara Hannigan.

As a singer, Hannigan has forged a reputation as a fearless interpreter of some of opera’s knottier repertoire (many readers may have seen her haunting performance in George Benjamin’s Written on Skin at the Koch Theater in 2015, or even her performance of Ligeti’s Mysteries of the Macabre with the New York Philharmonic in 2010).

It was, therefore, almost surreal to see this stalwart of the operatic stage, back turned and completely silent, on the podium at the Alice Tully Hall in her New York conducting debut with the Juilliard Orchestra.

Hannigan’s conducting career has been a long time in the making: she has been conducting orchestral repertoire since 2011 (often doubling as the soloist), and made her much-touted opera conducting debut with The Rake’s Progress in Gothenburg last year.

It is exceedingly rare for opera singers to take up the baton (Domingo tried…), and rarer still for a singer-conductor to maintain a successful career as a leading lady on the side.

In this regard, Hannigan something of a trailblazer, making a big splash in a field notoriously dominated by male ex-instrumentalists. Her electrifying performance with the Juilliard Orchestra on Friday night proves that Hannigan is as much a force to be reckoned with on the podium as she is onstage.

Hannigan began the concert with a turbo-charged rendition of the dance from Strauss’ Salome. Hannigan downplayed the romanticism of Strauss’ score, highlighting, instead, the pointillistic nuances of the famously-detailed orchestration. The Juilliard Orchestra rose to the challenge, executing even the most fleeting accompanying figure with biting clarity.

Hannigan consistently favored precision over schmaltz, whizzing through the dance’s climaxes with a Boulezian efficiency. Indeed, in the dance’s more chaotic moments Hannigan’s Salome seems more calculated and mechanistic than hedonistic or frantic (one could imagine Hannigan herself delivering a terrifying performance in that role).

Only in the heavier string melodies and the suitably-snarling oboe refrain does Hannigan allow her orchestra more room to breathe.

Haydn’s Symphony No. 96 in D Major was certainly the odd one out on the program, interpolated, as it was, amongst four works from the early twentieth century. Hannigan, however, defending the rather lopsided programming, lauds the “very modern feel” of Haydn’s music.

Indeed, under her baton, the Juilliard Orchestra brought out the angularity and (dare I say it) groove of Haydn’s “Miracle” symphony.

Hannigan navigated the interplay of major and minor in the first movement’s adagio opening with nuance and sensitivity; however, it was in the following allegro that Hannigan demonstrated an acute understanding of the galant style, bringing forth the razor-sharp contrasts and rhythmic quirks of Haydn’s score.

In the andante, Hannigan’s penchant for the mechanistic often meant that the repeated rhythms felt a bit robotic, and more could have been done to shape the movement’s faltering melodic fragments.

However, Hannigan found playfulness and charm in the soloistic passages of the movement’s extended coda (featuring some sprightly playing from violinists Ashley Jeehyun Park and Valerie Kim).

While Hannigan gave suitable bite to the minuet’s ländler-esque refrain, it was Gabriel Young’s exquisite oboe solo in the trio which truly took the cake. Indeed, the entire symphony felt like a covert oboe concerto, with Young delivering show-stopping solos in the first and second movements as well.

For the symphony’s finale, Hannigan presented an edge-of-your-seat allegro jam-packed with characteristic wit and precision. The movement’s moments of sturm und drang had all the fire and fury of a Mahler symphony, the orchestra unafraid to dig into Haydn’s crunchier dissonances.

Debussy’s solo flute piece Syrinx was yet another quirky addition to a program of primarily large-scale orchestral works, and certainly an unconventional way to begin the program’s second half.

Hannigan, however, allayed some of this oddness by placing flautist Emma Respini (navigating Debussy’s sinewy phrases with a vibrant vibrato) on the pitch-black balcony of the auditorium, segueing the flute solo into Sibelius’ Luonnotaras if it were an extended introduction to the tone poem.

Soprano Meghan Kasanders gave a tour-de-force performance in Sibelius’ fairy-tale-cum-creation-myth, holding her own against solemn brass and swirling harps. Kasanders met Luonnotar’s immense vocal demands with a boomingvoice, bright and dazzling in the upper register, warm and cutting in the lower register.

Kasanders lent a welcome richness to Sibelius’ sighing strains, while her piercing cries of “ei” were much befitting the poem’s avian protagonist.

In this short piece, Sibelius gives us all the drama of a three-act opera, and Kasanders has the kind of mesmerizing stage presence to pull it off. The orchestra adeptly matched the vocal drama, the interweaving pianissimo flutterings brimming with primordial anticipation.

Hannigan seemed to feel most at home as a conductor in Bartók’s suite from The Miraculous Mandarin. Like Salome’s dance, the suite is ostensibly a strip-tease, salvaged from a ballet so violent and pornographic it was banned in Germany upon its premiere.

Rallying the full forces of the Juilliard Orchestra, Hannigan powered through the suite with ear-shattering brutality. However, even in the most cacophonous passages, the orchestra maintained an incisive textural clarity, Hannigan able to look beyond the sheer noise of Bartók’s score to bring out every grisly textural detail.

Hannigan seemed well-attuned to Bartók’s vast palette of orchestral colors, finding sizzling energy in the suite’s subterranean rumblings and sneering glissandi, although some of the woodwind solo passages lacked the warmth and charisma needed for such a kaleidoscopic orchestration.

In fact, some of the best playing here came from the string section, who ran the full gamut of special effects, from col legno twitterings to ghostly sul ponticello.

It seems to me that Barbara Hannigan is changing the game of conducting, not only in terms of her unique career trajectory, but also aesthetically, pushing an orchestral sound that is fresh, vibrant, and distinctly modern.

I think it is fair to say that Hannigan conducts how she sings: with great energy, and even greater attention to detail, a style the Juilliard Orchestra so obviously relished.