Cellist Leah Coloff’s one-woman cabaret act ThisTree finds its place among a lineup of Prototype Festival miniatures this week that seem to plumb the depths of womanly distress. 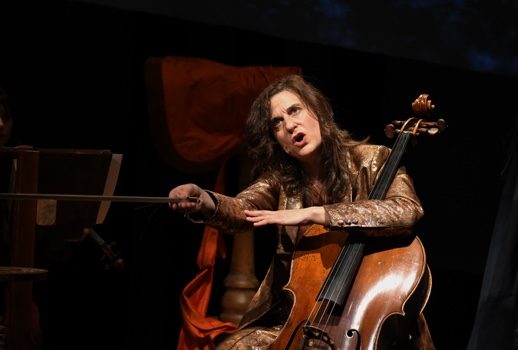 Cellist Leah Coloff’s one-woman cabaret act ThisTree, which premiered Sunday on the HERE main stage, finds its place among a lineup of Prototype Festival miniatures this week that seem to plumb the depths of womanly distress.

The same cold afternoon I saw Coloff’s show, I was also treated to a performance of Ellen Reid’s vastly superior Prism a few blocks over. The difference in quality between the two works could not have been more plain.

Whereas Prism parsed a complex, troubled female kinship through lush harmonies and deft erasures of time and space, ThisTree nearly cracked itself trying to present several autobiographical relationships at once; the results often felt more tangled and uprooted than personally meaningful.

And I say this despite having really wanted to like the show. Coloff is a Pacific Northwest transplant with a background in Saint-Saëns but an angsty mien her website claims grafts classical with “70’s rock and a pioneer spirit.” Her 1999 debut album, Dark Sweet Heart, was, again according to her website, “the epitome of her self-identified style CLUNK, classical meets punk.” (There must be a more publicist-friendly portmanteau for this.)

And in terms of sheer sound and look, Coloff is a lovable, Lilith Fair-adjacent acme of 90s-era feminist nostalgia. The voice evokes Melissa Etheridge, Ani DiFranco, Paula Cole, and Tracy Bonham. The hair is fibrous and tousled enough for a TRL hootenanny, a Seattle farmer’s market, or your standard Riot Grrrl hazing.

And in much the same manner as these divas of the grunge coven, Coloff focuses her writing on the domestic sphere—especially its darker, angrier features. Her latest show is backed by a sextet of female instrumentalists, a couple of whom lend their vocal support on songs about the vagaries of being a good daughter to troubled parents, her failing partnership with an abusive bassist, her various muses.

Beneath a wash of sepia imagery (director Ellie Heyman keeps it spare), an armoire of skeletons with which Coloff seems still to be reckoning emerge: madrigals are given titles like “Secrets and Silence”; lyrics come imbued with the kind of hipster therapy saws that even Tori Amos might brush aside. “Grow up with secrets,” Coloff caws, “secrets are safety.” That sort of thing.

A number of the private affairs given centrality here involve the cellist’s parents, who hailed from different backgrounds and apparently handed Coloff much anguish to suss out later in life.

The variegated heritage of her upbringing is referenced through the boho foods she says she was raised on—the Bulgarian yogurt and stuffed peppers of her European father, her mother’s awl-’murrican beans—as well as by the enormous, crimson prairie bonnet and Carter denim cape she first enters with. (Those in the market for a “patchwork quilt” metaphor won’t leave empty-handed.)

Her stern father forced her to absorb classical music from a young age; for decades her mother obscured the true parentage of her brother Brian (“You’re a lioness, baby,” is our troubadour’s oblique response to this); the rodents she and Brian owned in childhood symbolically ate each other; similes nearly as heavy-handed as her playing. At one point Coloff split her bow.

Then there was the child she and her husband struggled in vain to conceive. We are regaled with gynecological anecdotes of the sort one might hear from a PP lobbyist or frustrated gal-pal. The insane expense of IVF, those last-ditch trips to the Chinese acupuncturist, on and on, song in, song out.

Little of this coheres. Underlying the narrative scrim, however, is the uneasy sense that it may have been for the best that the cells aren’t implanting: the relationship is shaky, the partner unkind.

Still, Coloff is perhaps at her most artistically successful when handling these sorts of paradoxes. Her man’s “rage cannot be contained,” and neither can her own anger, nor her pain. Burn-burners about their union showcase a rare, exciting side of the cello one doesn’t normally encounter in concert: the frenzied wrath it can shake down from the most unforgiving family tree.

But despite all the overshares, this show tends to raise more questions than it answers. Why, for instance, do we so bemoan the oppressive paternalism of the fertility industry yet hanker so persistently for biological offspring? Why do we gird ourselves with an all-female pit band to perform a show that scores at best a D+ on the Bechdel test?

Coloff tackles none of these larger issues. Though with seemingly all the details thrown into her retrospective and no cathexis left unturned, she also hasn’t spent too much time making the editorial choices that would have streamlined her story to begin with.

“What do you know that you don’t want to know?” she wonders at one point.

Well, in this case, most of it.