Though barely a week old, 2019 has already provided New Yorkers with an essential, breathtaking music drama focusing on two women struggling for their very survival. 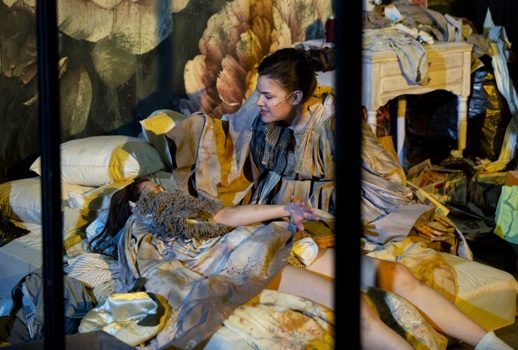 Though barely a week old, 2019 has already provided New Yorkers with an essential, breathtaking music drama focusing on two women struggling for their very survival. The Met’s Adriana? No, that’s so last year!

Sunday night saw the local premiere of Prism, an inscrutable yet mesmerizingly beautiful new opera by Ellen Reid and Roxie Perkins that serves as one of the centerpieces of the wildly ambitious PROTOTYPE Festival currently running for the next week throughout the city.

I must admit that contemporary opera doesn’t always float my boat and yet for every turgid The Exterminating Angel there’s a provocative and satisfying Written on Skin.

So when La Cieca exhorted several of us to get our butts downtown to this year’s Prototype, I was both wary and cautiously optimistic as the festival since 2013 (in conjunction with Beth Morrison Projects and HERE) has been enlivening bleak Januarys with some of the most interesting new works like Breaking the Waves and Acquanetta.

But I wasn’t prepared for Prism, the riveting work that greeted me at the East Village’s fabled La Mama Ellen Stewart Theater, an often baffling yet haunting experience that has continued to disturb me hours and hours later.

The friend who attended Prism with me had recently confided to me his fascination with the work of the American director Peter Sellars. I mentioned that I learned back in the day to just let his productions work their magic and to never read Sellars’s pages and pages of single-spaced explanations before the show began.

Perhaps with that in mind, in the moments before the opera started, I failed to scan Reid’s and Perkins’s brief notes on Prism and thereby struggled mightily to make sense of their work which eschews traditional forms of operatic storytelling.

After the performance I learned that their intention was to create a piece about Post Traumatic Stress Disorder resulting from a sexually traumatic event. I must admit that my initial deciphering of the clues presented to me on stage often led me to some wildly different guesses yet their work proved so richly engrossing that it will surely engender many varied interpretations.

The setting of the work’s three brief acts moves from a small stark white bedroom to a vast dance club cluttered with hanging mirrored disco balls to a return to that same bedroom cluttered with boxes of clothes with walls now completely covered by flowery murals.

In those spaces the older Lumee and the younger Bibi enact a blighted ritual of illness and violence, confinement and escape. Are they lovers (they are first glimpsed sleeping together in a small double bed) or mother and daughter or caretaker and patient as Bibi appears to suffer from a debilitating disease which has left her unable to walk.

Their stylized, poetic dialogues range from debating the mysterious “Blue” which has caused the sickness and which waits ominously outside the bedroom door to Bibi’s determination to free herself from their oppressive confinement.

The work’s daring elusiveness made me grasp at its possible allusiveness. Somewhere I remember reading of a connection to Rainer Werner Fassbinder’s film The Bitter Tears of Petra van Kant and the floridly painted walls of Adam Rigg’s third-act bedroom set seemed to explicitly evoke the German director’s baroque vision of lesbian hell.

It was easy then to interpret the first act as perverse game-playing by unhappy lovers but that reading only led me so far. Then, the torturous cat-and-mouse between a nurse and her patient in Ingmar Bergman’s Persona in which one of the roles is played by an actress named Bibi also came to mind as I attempted to untangle the work’s threads. That line of inquiry too wasn’t fully fruitful but my growing mystification only increased my curiosity.

Reid’s eclectic, gorgeous score is helped immeasurably by Perkins’s pungent yet graceful text which skillfully avoids the common traps that befall many contemporary librettists who either become numbingly prosaic or bewilderingly abstract.

A special joy was Reid’s grateful vocal writing which instead of tormenting the singers allowed them to soar not scream. The plush tonal writing eventually turned harsh and dissonant as the turbulent subject matter became more and more harrowing yet it was never off-putting in the way some difficult new operas can be.

The two sopranos, Anna Schubert as Bibi and Rebecca Jo Loeb as Lumee, were astonishing, singing their demanding music with lustrous freedom while enacting their rigorously punishing roles with compelling intensity.

They were magnificently supported by the 14-member NOVUS NY orchestra led by Julian Wachner whom I’ve previously admired conducting early opera and here who drew keenly virtuosic playing from his forces. The principals and the 13-person Trinity Choir were ably abetted by Garth MacAleavey’s sensitive sound design and discreet micing.

The supertitles were helpful for the dense, sometimes fugitive text but the performers’s clear and communicative diction made almost them superfluous.

James Darrah’s elegantly vivid, consistently involving production was a gift to this difficult piece. Despite his intricate work, I feel I haven’t begun to plumb the depths and intricacies of this prismatic work and it surely deserves multiple viewings and further study.

When I spotted Isabel Leonard at intermission, I was reminded of Marnie, Nico Muhly’s recent Met stumble that dealt more conventionally if far less interestingly with complex female psycho-sexual issues. And there is more music in ten minutes of Prism that I long to hear again than in the whole of Marnie!

Five performances of Prism remain this week in New York but it seems clear that after its Los Angeles Opera world premiere last month it should have a long life worldwide and a recording would definitely be in order. One awaits the next Reid-Perkins collaboration with awe and eager expectation.