A talent to a Muse

Use bodily force and get your friends to one of the next five performances of the Met’s new production of Adriana Lecouvreur. It is everything! 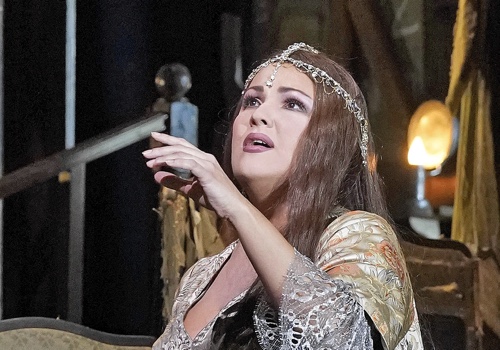 Everyone’s New Year’s resolution should be to help out all those friends who smile and nod but really don’t “get” opera: if necessary use bodily force and get them to one of the next five performances of the Met’s new production of Adriana Lecouvreur. It is everything!

The last time the Met mounted a new production of Adriana Lecouvreur the always-cheery critic Irving Kolodin hailed the work as “theatrically vapid and musically void.” In its stead he rued that the company hadn’t spent its money on more deserving masterpieces like La Juive and Giovanna d’Arco.

It’s a quintessential red-blooded Italian opera especially when performed by such a lavish all-star cast as the one that on New Year’s Eve opened Sir David McVicar’s already creaky, now eight-year-old version. I felt not a single twinge of guilt for the nearly “endless pleasure” they summoned up.

Renata Tebaldi was blamed by Kolodin for demanding the Met mount Adriana in 1963; presumably the house didn’t want to repeat the mistake made when Edward Johnson refused Rosa Ponselle’s similar request which reportedly precipitated her tragically premature retirement. 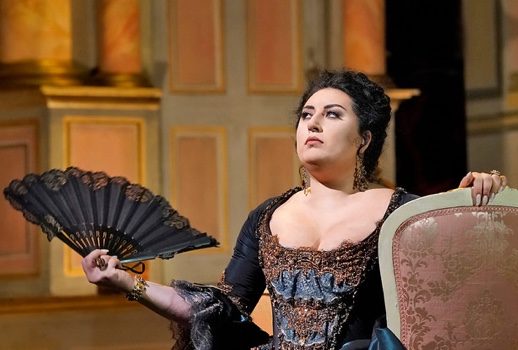 Today’s inevitable naysayers will no doubt blame reigning Met queen Anna Netrebko for the current revival but many others will instead thank her for headlining an evening that featured some of the most potently thrilling singing the house has heard in many seasons.

If Adriana is not now an ideal match for the soprano’s otherwise excellent current vocal state—it seemed consistently a bit too low for her—she nevertheless gave her most compelling portrayal seen at the Met in 2018, a year which also featured her riveting first-ever Tosca and a critically acclaimed Aïda.

She got off to a rocky start having trouble consistently finding the correct pitch during the opening lines of Adriana’s best-known aria “Io sono l’umile ancella.” However she soon righted herself and spun out some ravishing pianos that she held to for such extreme lengths that one imagined she was initiating a new soprano breath-competition that would rival the one tenors indulge in with Siegmund’s “Wälse”!

From then on she conquered the role’s most celebrated touchstones with an almost insouciant flair—the blazing bitch-fight with the mezzo, the fierce Racine recitation, the doom-laden “Poveri fiori” and even the potentially risible conjuration of Melpomene, the muse of drama, as she died.

But what was even more impressive than the fine singing was her fascinatingly complex acting. She clearly delineated the public versus the private Adriana: there was, for example, a sly bit of bored condescension as she launched once again into her ever-ready “l’umile ancella” shtick in the third act.

During the final scene we witnessed ever more facets of Adriana as she went from suicidal despair at her lover’s betrayal to a buoyant recommitment to her art upon the arrival of her chattering fellow-actors–especially after her diamond necklace was returned. 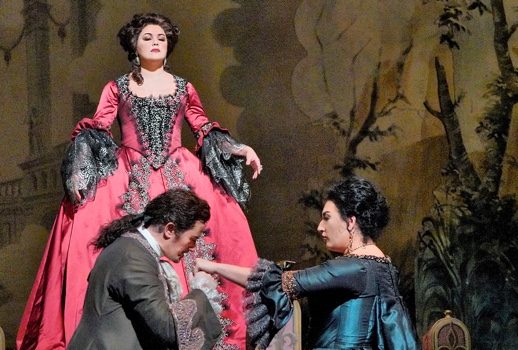 If her fraught relationship with the sometimes-shady Count of Saxony brought forth mostly joint fortissimo high notes, her more enthralling collaboration was with Ambrogio Maestri as Michonnet, her faithful, possibly gay BFF.

During the enraptured monologue as he watched her from offstage, I imagined that his fantasies of marriage were the only way he can make sense of his devoted theater-queen diva worship. Netrebko and Maestri brought a palpable warmth to their intimate interplay: she sweetly indulging his impossible dreams while he shyly reveled in commanding her nearly complete attention.

It was a pleasure to have a singer in his prime in a role that is sometimes shunted off on an aging baritone near retirement. If he sometimes bellowed his high notes, Maestri otherwise brought to the pitiable confidant a round and juicy voice though his truly unfortunate wig and get-up sometimes suggested more a towering pantomime dame than an 18th century stage manager.

His attentive manner was a striking contrast to Piotr Beczala’s strutting Maurizio. However, the Polish tenor always radiates such wholesome good humor that it was nearly impossible to see the Saxon two-timer in a bad light.

Beczala was in ringing form, at ease in the role’s ardent arias and besotted duets. I hadn’t been so taken with his Rodolfo last spring in Verdi’s Luisa Miller so it was grand to hear him in such fine fettle, and he proved a mightily sympathetic partner for Netrebko during her extended death throes. 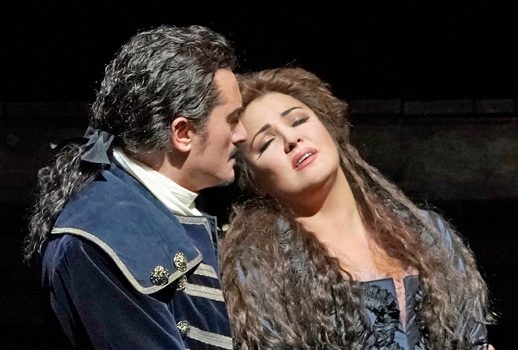 The Met has pointed out that Adriana is the sixth partnership between the two at the house, a fine association that once was presumably planned instead for the soprano and now also-ran Rolando Villazón.

The plum role of the duplicitous Princesse de Bouillon nearly stole the show as Anita Rachvelishvili continued her breakout season at the Met. Although I’m not a reverent “chest nut” like the friend I attended the premiere with, but it was impossible to resist the mezzo’s prodigal vocal generosity as she barnstormed through the opera’s most perfect aria “Acerba voluttà.”

While the Princess can be a fairly one-note role, Rachvelishvili found some softness in her jealous interchanges with Maurizio as well as some humor in her lewd teasing of the Abbé.

Once or twice I wanted just a bit less hard-driving volume from her but all in all she once again gave notice—as she had earlier with her extraordinary Amneris (she was truly the star of that show)—that she is now one of the most exciting singers on the world’s stages.

One can only anxiously await Rachvelishvili’s Dalila which begins a run at the Met on March 13.

Unfortunately, Rachvelishvili was the victim of one of McVicar’s clunkier stunts.

When one entered the theater, one saw a spot-lit bust of Molière positioned right at the prompter’s box. During the not-so-brief pause between the first and second acts, an actor strode onstage and struggled for excruciating minutes to wrest the statue from its position and then dragged it off-stage to scattered chuckles just before the churning prelude to the Princess’s aria began. Huh?

Otherwise his tired “all the world’s a stage” concept didn’t do a lot of harm—other than Charles Edwards’s ugly revolving wooden proscenium which “served” various purposes throughout the evening—nor did it provide any particular insights.

He notably fumbled the closing of the final two acts with first a blandly slow exit for Adriana after her splendid humiliation of her rival and then a head-scratching final tableau as Adriana’s theatrical colleagues applauded her as she expired for real.

Most definitions of “camp” require that a work’s creator be fundamentally unaware of what he doing. That obliviousness can be the only explanation for Andrew George’s ghastly choreography for The Judgment of Paris during the third act. But unfortunately it was not even deliciously bad as enjoyable camp can sometimes be.

Gianandrea Noseda’s precise and bustling reading of the score drew sumptuous playing from this orchestra but more than once one wanted less iron control over some of Cilea’s lush melodies.

Occasionally one felt the singers hemmed in although he was notably indulgent with Netrebko in her two arias and always obligingly stopped for (enthusiastic) applause despite the composer’s through-composed lines.

I’ve been lucky enough to hear a number of fine Adrianas over the years—Renata Scotto, Mirella Freni and Angela Gheorghiu—and to a lesser degree —Netrebko certainly belongs among that august company and she performs Adriana just five more times before turning the role over to Jennifer Rowley.

It’s hard to imagine any opera-lover not seizing the chance to see Anna and Anita once again fighting over a man—but this time the tenor is worth winning! HD viewers worldwide will get their chance on January 12.