Mark Morris’ saucy, psychedelic The Hard Nut has returned to the Brooklyn Academy of Music yet again this week for its 27th Christmas since the ballet premiered in Brussels. 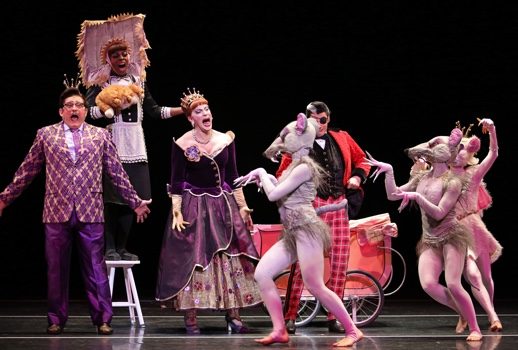 Mark Morris’ saucy, psychedelic The Hard Nut has returned to the Brooklyn Academy of Music yet again this week for its 27th Christmas since the ballet premiered in Brussels.

The cast hasn’t changed much over the last decade, though neither has the perennially warm reception given to this snowy retelling of Tchaikovsky’s The Nutcracker.

In these parts, Morris’ choreography is now as well known as that of Baryshnikov or Petipa.

While Morris’ version takes the same cues from the celesta-infused Candy Land music of Tchaikovsky as the others—the score remains almost entirely intact, missing, as far as I can tell, only the full expanse of Act I’s mouse battle—it departs from the classics in obvious ways, from its late-80s RAW style of cartoonist Charles Burns to its Yuletide helping of cross-dressers.

In this version, the company takes the 19th-century German specifics of the original E.T.A. Hoffman family psychodrama/mouse invasion thriller/fantastical travelogue and shifts  them to the trippy 1960s and 70s.

The Stahlbaum family—mother, father, three children—is bracing for a holiday party with the assistance of a very put-upon and arch maid, who flits about en pointe before the guests arrive.

Festivities here include the appearance of Drosselmeier (fabulous Billy Smith), who enchants and delights the kids with space-age Barbie and Robot dolls, and then with a nutcracker who later returns in the form of Drosselmeier’s nephew after a group of G.I. Joe Soldiers (how flipped out are Mattel and Hasbro over this adaptation, I wonder?) have defeated a Mouse King and lackeys… or something?

Anyhow, despite the staging’s most committed efforts to provide exposition (there’s some mime stuff going on I had to google later to figure out), the story of Drosselmeier’s relationships with his nephew and the rodent kingdom is clearly secondary to the iconic around-the-world suite of dances included in Act II.

And with the special enhancements of Adrianne Lobel’s spiky sets and Martin Pakledinaz’s bright and a-go-go costumes, these set pieces end up giving the show much of its caramel center.

Spanish, Chinese, French, Russian. Everyone has a favorite racialist divertissement, though I happen to adore Tchaikovsky’s languid and sultry take on Arabia, here vividly imagined as a quartet of skeikh-spies, men in diaphanous gauze and sunglasses led by a courtesan who puts them in their place.

As with every year, individual performances in this show, offbeat and zany, are a huge hit with audiences. This is especially true of the cross-dressers. 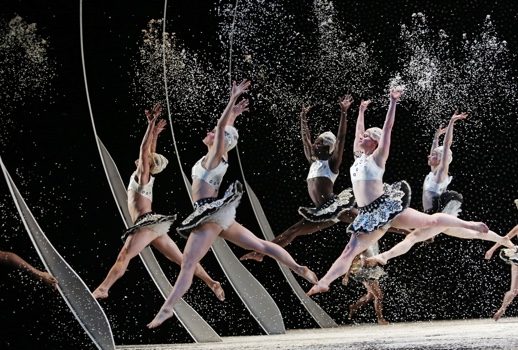 John Heginbotham scores big belly laughs with his loopy and nervous Mrs. Stahlbaum; as the salty but loving Housekeeper, Brandon Randolph demonstrated why he is the perfect successor to the venerable Kraig Patterson in one of the work’s most famous roles. June Omura was, as ever, a perfectly rambunctious little rascal.

Still, the night I attended, I was most struck by the performances of veteran MMDC dancer Lauren Grant (this marks her 20th performance in the central role of Marie) and of Lesley Garrison, who plays Marie’s vain older sister Louise, later turned (again for reasons I had some trouble following) into a pig princess.

Both brought superior comic timing to their parts, and made fully-etched characters out of caricatures.

And as most cultists know, the show’s two finest moments come in the form of Morris’ snowflake and flower waltzes.

The trick to the former dance, which caps the first act, is in the rightly exalted visual effect of literally dancing through cloudbursts of white flakes (20 pounds per night), which members of the company atomically disperse as they manège and jeté through the air.

And as for flowers, the Mark Morris troupe vividly conjures vines blooming to life, night after night, as their roots sink rhythmically to the floor.

Following the performance, we were treated to the sight of Morris himself emerging from backstage (and from out of his bit part as Mr. Stahlbaum) to thank his dancers and raise money for AIDS-related charity.

Fresh-faced in his shawl and sneakers, Morris looks aged but not old, and it was a quite moving to see him take the stage with the rest of his company.

Even after all these years, this is a man who has the humility to appear in person beside one of his career’s great contributions: a wintry masterpiece that covers queens in snow.