Are you ready for some Fantasy Football? 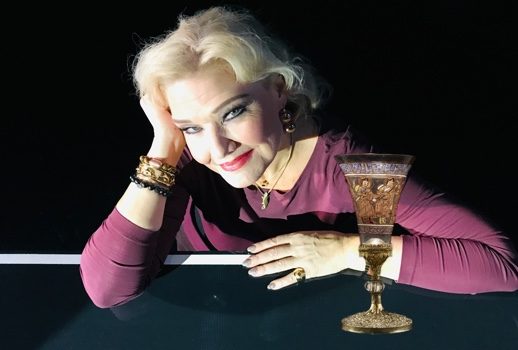 Many of my friends and colleagues play fantasy football, an online game where you as team manager gather athletes of varying skills and stats into a team of your choosing. You pit your imaginary team against other players in matches to test your skills in the craft of assembling and managing a sport team.

Let us translate the mechanics of that game to our favored art form. Imagine yourself as the artistic director of an important opera house, able to command fees for the finest vocalists, conductors, and producers.

Your chorus is world class, as blended, linguistically adaptible, and musical as any trained by the likes of legends like Wilhelm Pitz. The orchestra playing in your pit is a virtuoso sports car, sumptuous in sound and versatile in stylistic capabilities.

At the heart of your house is an acoustically pristine auditorium with a capacity for 2,500 patrons and standing room for about 500-750 more.

The most passionate opera fans are always in attendance, so you can expect that much of what happens in house will eventually be dissected and gossiped about by commenters of a certain quarter century old blog.

All singers need to be contemporary. They invariably ought to be excellent vocalists, although some allowances can be made for Kunst. Chemistry between the cast members is also incredibly important—it’s not only crucial that you hire star vocalists, but also artists who can really fire up everyone onstage to give their best.

At the end of the day, you want your audience to leave the opera house feeling dazed.

I’m not the most theatrically minded person, but many people who comment on parterre are. If you can suggest an ideal director for the personalities in these casts, that would be fantastic.

You can pair any stage director with a set designer. You can mount an existing production, or you can envision one for a director and stage designer whose aesthetic you admire.

Or you can choose to revive a great antique production and assign that to a revival director of choice.

One more note: I didn’t fill in all members of the cast. You can fill the smaller parts with house singers as needed.

Ok, let’s have some fun. Please provide your thoughts for alternatives in the comments section.

Mattila’s tweet announcing her first Isolde was the subject of much discussion on parterre some weeks ago. Her shimmering and expressively ductile soprano, forged from Elvish silver, was always one that I imagined as a great artistic foil for Wagner’s more complex heroines.

While one laments that she never negotiated Isolde’s character during her prime, Mattila’s hypnotic stage artistry makes a compelling case for presenting her reading of the character, even if only in a one-off run or a concert performance.

Considering that the soprano is entering the late autumnal stages of her career, ones hopes that this production can be mounted within the next year or two to guarantee technically sound vocalism.

My first dream partner for Mattila is Andreas Schager, whose lean and muscular, triathlon-grade tenor complements the dramatic bite of the soprano’s phrasing. Hearing both dynamic artists tackling these roles with their customary abandon would no doubt simulate the experience of a potent narcotic.

As a vocal complement to Mattila’s sound, I’d also entertain Klaus Florian Vogt’s (a suggestion by La Cieca) Legolas of a tragic hero. His ethereal, silvery instrument might appear light for Tristan, but the amontillado color of his tenor focuses so well and seems an ideal blend for this concept’s Isolde.

The supporting roles are cast for youthful vigor (Ryan McKinny) and for transparency of vocalism and lilting tone (Mihoko Fujimura). The white heat of such a cast requires a youthful and vigorous Marke. In keeping with this concept, I cast Gunther Groissbock as the wounded King.

Jordan and Salonen can command the right texture, tempi, and dynamics to spin an intimate, slow burn of an accompaniment for this roster of singers.

When I saw Christopher Corwin’s Trove Thursdays special that featured the CSO’s Boris Godunov with Abbado, I wondered to myself why this opera hasn’t been produced in recent seasons at the Met.

We have so many excellent Russian singers today, and there are enough world class basses in the international circuit who can make something special about the rumbling tsar. Boris is understandably a tough opera to stage.

The cast is as large and characterful as an ensemble episode of The Simpsons, and one requires a talented conductor who can stitch a largely episodic score and plot into a cohesive narrative.

At the center of it all is Boris. For my envisioned production, one tried and tested singer who has successfully portrayed the role is Ildar Abdrazakov. However, if we permit a bit of experimentation with our casting, I’d like to suggest Gunther Groissbock.

His imposing vocal and theatrical presence could by itself carry an entire production of Boris, even if he were already surrounded by a cast of this quality. For those wondering about his linguistic fluency with Russian, worry not. Groissbock sang Gremin beautifully in a 2011 production from Valencia.

Gabor Bretz, who scored a triumph as Jochanaan in Salzburg and a terrific Bluebeard, is another bass-baritone whom I could imagine triumphing in the role.

Tughan Sokhiev, present director of the Bolshoi Theater (and a remarkable conductor of Shostakovich and German composers like Brahms and Mahler), leads this dream Boris.

In his symphonic work, he displays a fine command of color and line—elements of performance that should make something of a compelling tapestry out of an intrinsically patchwork drama.

A conversation with poster Anton Von Webern reminded me about Aribert Reimann’s Troades—an opera premiered during the 1987 Munich Festival, produced by Jean Pierre-Ponnelle, and cast with great dramatic singing actresses like Helga Dernesch (a Reimann muse).

Although no expense seemed to have been spared in premiering this new work, Troades never achieved staying power in the canon (even if Lear and other Reimann operas have been revived for major festivals and more experimental houses like Frankfurt).

A recording made with the original artistic team was pressed by EMI, but only in vinyl. To this day, I have not heard Troades, although I was able to successfully track down an inexpensive vinyl record on eBay, replete with the opening night program from the Bayerische Staatsoper.

It should arrive within a week or so. Thank god for millennial roommates who love vinyl!

Reviews of the production’s premiere praised the theatrical experience of the production while criticizing Reimann’s difficult and persistently declamatory, almost oratorio-like score—factors that may have contributed to its rather short shelf life on the international stage.

However, more than three decades have lapsed since the work’s premiere, and audience’s ears have evolved, as has Reimann (is a revision of the score a possibility to accommodate his newer idiom and our modern tastes?)  It’s about time that an opera house revisits this work, even if only for a festival setting.

The cast that I assembled here is extrapolated from what I know of the original artists’ vocal and dramatic qualities. Four of the women are crucial to this production: Hekabe, Kassandra, Andromache, and Helena play the most significant roles in the drama.

At this stage of her career, Nina Stemme’s middle and bottom range have expanded with a rich, bronzen dimension that parallels many of the qualities Dernesch likely wielded in creating the character of Hekabe. Her attention to detail also reminds me of the same care Dernesch took to shape and color her phrases and words.

Doris Soffel’s original Kassandra was apparently made difficult by a vocal line that balances declamatory phrasing with treacherous coloratura (Marlis Petersen’s Medea will give you a flavor of how Reimann shapes a coloratura phrase).

Given her ease with Amme’s music and her rich vocal qualities, Tanja Ariane Baumgartner fits my idea of a tragic, commanding Kassandra.

I know little of the sopranos who played Andromache and Helena, although a survey of both original artists’ careers convinces me that Camilla Nylund and Brenda Rae will create a strong impression in both roles.

The rest of the cast is filled with excellent artists singing in German opera today. Given their great successes with works like Lulu and Wozzeck, I’ll assign either Marc Albrecht or Ingo Metzmacher to conduct this revival of Troades.

I’m going to suggest a producer for this one: Vincent Huguet.