At Friday’s opening of Otello, there was a good deal of interesting going on, though not all of it necessarily onstage. 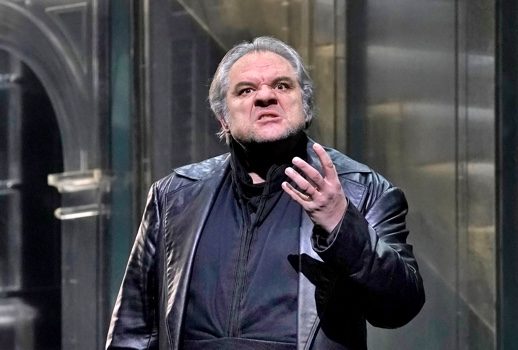 “Perhaps his production will prove easy to revive and hospitable to future performers,” wrote Our Own Christopher Corwin, “but there’s just nothing interesting going on.”

It was September 2015, and parterre box’s chief critic was lamenting the gala opening of the Metropolitan Opera’s latest season, which had launched with a brand new production of Otello.

As a recent article in the Times pointed out, the experience, though not wholly positive, was also a first for our e-zine-cum-blog, signaling the publication’s first credentialed review of a Met performance.

At Friday’s opening, there was in fact a good deal of interesting going on, though not all of it necessarily onstage.

That same afternoon, the Met had made a surprise announcement that crowd-pleasing spinto tenor Stuart Skelton was ailing, and would be replaced in the title role by a lesser-known agent: Arlington-born former big rig driver and bounty hunter, Carl Tanner.

While not a total newbie to the New York stage—a run of Tabarro at City Opera; Tanner’d also already starred as Dick in the Met’s 2010 revival of Fanciulla—his performance history here was spare, pressure was high, and we ignoramuses had only a few sundry video clips and a jewelry website to sift through for intelligence on the blond who was about to headline as the Met’s latest Lion of Venice. (Say what you will about Tanner—just don’t ever call him a one-trick pony.)

On top of backstage substitution, this was also to mark the debut appearance of surfer-haired Venezuelan maestro Gustavo “The Dude” Dudamel, who would be leading the Met Orchestra for the first time.

Director of the Orquesta Sinfónica Simón Bolívar and the Los Angeles Philharmonic, Dudamel is renowned for his daredevil approach to phrasing and tempi, so many of us were eager to see what he might make of a Shakespearean tragedy about a flawed army general who asphyxiates his Catholic wife on the mistaken belief that she’s cucked him.

Supporting these two tenderfoots, Met mainstays Sonya Yoncheva and Zeljko Lucic were also on hand to reprise their Desdemona and Iago roles from 2015.

Despite the routine intonation troubles that sometimes bedevil both stars, the two turned in ravishing performances that moved mostly well alongside Dudamel’s more ebullient choices. Both merited far more applause than they got on opening night. Yoncheva had herself also been ill, after all.

Sher’s midnight-hued production is not for everyone; its strobe-lit design plays up the opera’s dark qualities with little emotional relief, and sets designer Es Devlin’s frosted lucite panels against projections meant to evoke clouds and act one’s stormy waves.

The overall effect, brought to us by lighting designer Donald Holder and projection designer Luke Halls, alternately evokes a Windows screensaver and a Lady Gaga concert—no huge coincidence, as Devlin’s designed for her as well.

I had less problem with the staging than Corwin did back in 2015, though I would on occasion have appreciated a slightly warmer visual approach, especially in Iago’s drinking song early in the opera, which involved the kind of aluminum folding tables you might encounter in a Mt. Sinai operating room.

Costumes by Catherine Zuber were no less spartan, and intriguingly grab-bag in terms of period and aesthetic: women in inky taffeta hoop skirts, men in military costume and leather trench coats. (Scheming ensign Iago looked well-equipped for a spanking at the Eagle.)

An airy nightgown in the closing act endowed Desdemona with a suitably sensuous and ghostlike aura for her big arias—I just wish there’d been more of this diaphanous quality throughout the show, as the hard leather-and-lucite look sometimes came off as harsh, especially during the act one love scene. 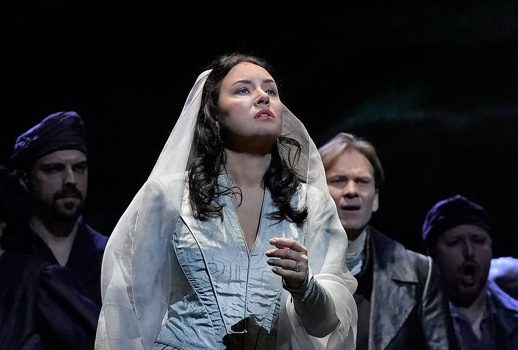 On opening night, Dudamel’s conducting was either terrific and exciting, or too much, depending on how you like your Otello. For me, the pacing generally fell into the latter category: a little hyperbolic, with speed either excessively fast and driving, or too mannered, as in the last act.

Such an approach had ramifications for the chorus as well—the Cypriot crowd in act two appeared hustled along by Dudamel’s driving baton—especially for the more intimate moments shared by the opera’s protagonists.

Under this conductor, “Già nella notte” started at a quick clip, and you could actually observe Yoncheva slowing Dudamel down when she entered the love duet.

Despite the intermittent tug of war, however, Yoncheva acquitted herself very well; this Otello really was her show. Before Friday, I was admittedly ambivalent when it came to both the soprano’s voice and her peculiarly icy stage demeanor.

It’s an uneven instrument, with a full and appealing chest voice and an unreliable passagio that only sporadically behaves. Nor is Yoncheva a great “floater”—a true pity when it came to the heavenly ascent at the end of her “Ave Maria,” which sank here like an over-freighted gondola.

The acting, though, was a revelation, with an act three “A terra!” that sent shivers into the audience. Yoncheva’s was a minx-faced upstart of a Desdemona, one defiant at her husband’s false accusations—not the shrinking and virginal vestal we usually encounter from more muted portrayals.

If only her chemistry with the nervous-seeming Tanner had been a bit sexier. Faced with a daunting task on opening night, though, the tenor improved with each act. Armchair broadcast listeners were right to appreciate his sound, which was strong and heroic, especially near the end.

What listeners missed was Tanner’s extremely weird and dilettantish acting, which seemed distant and aloof for most of the show yet culminated with some of the most hokey third-act agony-drops-over-a-handkerchief and fourth act boudoir-murders I’ve ever seen.

As the villainous Iago, Lucic hasn’t improved much since Corwin pronounced him “bland” a few years ago. How I wished he would just loosen up a bit and relish his smarminess: this was an “Inaffia l’ugola” that charged a bit too zippily, and I had a hard time buying his performance.

A more restrained Dudamel might do wonders for a cast that otherwise felt quite robust to me. I would argue that if this isn’t an ideal Otello, it’s a production that brings a much chest-voiced excitement to the Met stage.

As for the rest, perhaps Skelton will be well enough tomorrow to reclaim the smother-pillow that is rightfully his.