My sister, my queen

It had something for everyone who loves loud chesty singing and smoky soft-singing: from Tchaikovsky to Rachmaninoff to Strauss...

She sings so sweet and so nice, but in Krasnodar, Anya was sometimes a cruel one.

As Anya’s youngest sister Marya Yuryevna Netrebko—not Natalia, the pretty other sister you see with her at aqua park—I tell you story that is true:

And then, just like that—tfoo!—the bossy dyevochka would dart off to St. Petersburg conservatory with that round, bolshoi voice of hers that to me has always sounded like angels calling out from nearby nuclear reactor.

But now she is very famous person, we are grown znatnykh, I no longer must pack and unpack for New York show she is cancelling, and things have changed between me and my eldest sister. On Sunday, our Anya finally appeared at Karnegie Hollskom!

To New York newspaper, she is of course Anna, “queen of the Metropolitan Opera“: the “extra” diva with McDonald’s arch for eyebrow who inspires clapping and seizure-blackout and grown men to play at trap the hedgehog in toilet. (And while on subject: Anya is not “extra.” Other divas are “extra.” Anya is “ultra.”)

No, to me she will never be “La Splendida,” but always instead just zhenshina from Novorossiysk so very ultra she builds risky two-act recital around “Day and Night” theme, with songs in so many languages you think you are dead and then resurrected on polyvinyl floor of United Nations Secretariat break room.

I had my doubts. But take it from one who did not lose such moisture in the trusiki over Anya’s first Aida at the Met this year: the Karnegie show was one for the books.

It had something for everyone who loves loud chesty singing and smoky soft-singing: from Tchaikovsky to Rachmaninoff to Strauss; Leoncavallo, Offenbach, Debussy, and Fauré; Dvorak, Frank Bridge, Rimsky-Korsakov. Plus my favorite, that Beverly Sills aria about bimetallism.

Here was Anya as yedinoye proizvedeniye iskusstva, or, as you say in English, Gesamtkunstwerk. And here she did not disappoint. This was Anya set to high va-voom, outdoing, one cannot help but hope, even previous performances in Graz, Prague, St. Petersburg, Chicago.

Yes, entire family had warned her that appearing onstage in her one-strap white sparkly “napery” dress with lavender and pink silkscreen might pose small engineering problem—what if she would happen to trip on enormous train or get tangled up in hemline of dress and then go crashing herself into piano of legendary accompanying man Malcolm Martineau? 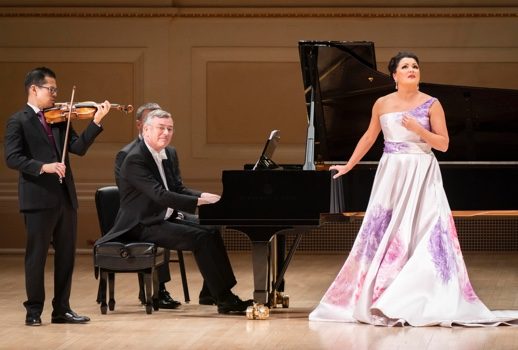 But no, it was all dream. As in Anya recitals now hazy in mists of time she put stage to use, making big theater show from every song. She did not fall or teeter-totter once during her first act with songs about daytime, but strode, side to side of stage, making way behind gospodin Martineau and helping him sort through twinkly finger-dilemmas like Strauss’ “Wiegenlied.”

And yes, konyechno: we had warned our Anyaleh that starting with big rose bouquet of purple color for singing trio of Rachmaninoff ditties about blossoming things—the first one called “Lilacs”—could become what we in the oblast might shake thumb at and call a little “on nose.”

But then audience could not hold applause through even one song in set: so agog were they at her her floated notes, such as money moment in “Zdes’ khorosho,” when Anya held very perfect and passionate high B for perhaps an eighth of a minute.

I realize rubato is not for all people; it is license of true divas, like Pogorelich and Corelli and usually my sister. But the push-pull with piano is technically correct, is made for Rachmaninoff’s passion shambles, and if you’ll please excuse—it is very, very huge fucking thrill.

I have never known rapture until I see our own Yusif Eyvazov put down his iPhone and stop filming so he can catch breath from that note, that vibrated the Hallskom. What can we say? He had the rapture in his kishechnik, too.

Little playful flourishes, like how she twirled for Rimsky-Korsakov’s triumphant Tolstoy setting, “Zvonche zhavoronka pen’ye,” and then marched far stage-right to usher in a nervousing violinist named David Chan to help her through performance of Strauss’ “Morgen!” (his playing… maybe not so lovely, and he stepped on her dress.) The end of “Morgen”: whisper-quiet to make neck hairs stand at attention like very happy chelovyek when I’m at beach in my kupalny kostyum.

Then comes the French: Debussy and Charpentier’s “Depuis le jour” aria, with sometimes eksentrichny phrasing but mostly lovely, spinning top, and then longer Tchaikovsky songs and a Frank Bridge piece that sounded to me just like that “Happy Talk” scene from South Pacific, except my sister does not sing in xenophobic pidgin dialect. (Here I ask why American writers—especially those with looks that have on at least one occasion been described as “smoldering”—think it is so funny to mock how Russians speak English.)

Anya ended part one of spectacle with version of “Mattinata” by Leoncavallo, tossing roses into audience the way we used to toss blinis at our boyfriends when they play not nice at “card game that resembles a bezik.”

My sister, she now wearing a Sixties, black, caped garment that looked most soignée with her diamonds and “Madame X” chignon, I will say. (She was right to veto my suggestion of wearing muppet trench coat from making Fall Instagram in Baden-Baden.) I will also say that Anya has been experimenting with updos lately. She says it is more refined on a woman her age, but also because she has to travel with bobby pins anyway to hold in place her fascinator when visiting Kunsthistorisches Museum in Vienna. 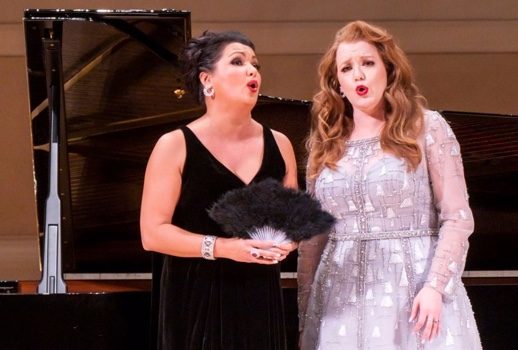 We know no one can do night songs like the Russians, and after duet with mezzo came more pesni by Tchaikovsky and a flickering barcarolle by Rimsky-Korsakov and Pushkin, “The clouds begin to scatter,” which was nice to listen to in Karnegie without acoustic problems like live recording with Barenboim that is basically sleep-music for boring date.

Amazing to me how Anya is floating notes in all three Strauss lieder so far into the program (“Die Nacht,” “Wiegenlied,” “Ständchen”), and with such focusing, even if some say her German is sounding more like it comes from Berlitz and not Deutschland.

I think maybe she invent a word or two in Fauré? And Dvorak’s “Songs my Mother Taught Me” a little slow for her? But her Rachmaninoff “Son” brings tears to my eyes, with the beating wings of Apukhtin’s poem you can hear written in the music, before those wings take off and are flying away with pianist, even after singing is over.

The way Anya can make rubles ring with Douglas Moore aria “Gold is a fine thing” was the biggest surprise for me—how exciting it would be to see her in American opera! or Broadway!—and the last high note made me feel inside like liquid was melting. Cano came back for Offenbach’s Hoffmann duet with black feather fan like you see in Ukrainian peeler club, and then there was best song Tchaikovsky has ever written, “Dyen’li tsarit.”

I would love for more encores than Arditi’s “Il Bacio” and “O mio babbino caro,” but that is all Anya gave us. But that is also how Anya is: always the queen of giving you everything and leaving you feeling it is necessary for having more.

Except for when she throws doll at you. Then one matryoshka is more than enough. 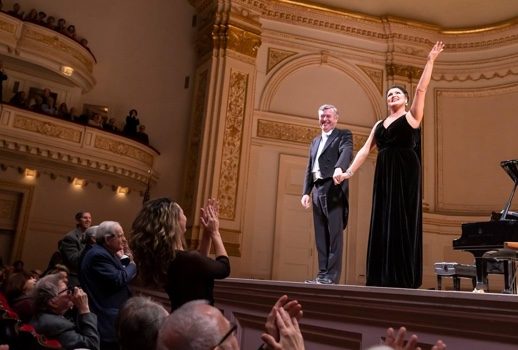