Rock out with your Tracht out

Lohengrin descended upon the Wiener Staatsoper this month like American college students to Oktoberfest: loudly, spastically, not especially coherent, and in full lederhosen and dirndls. 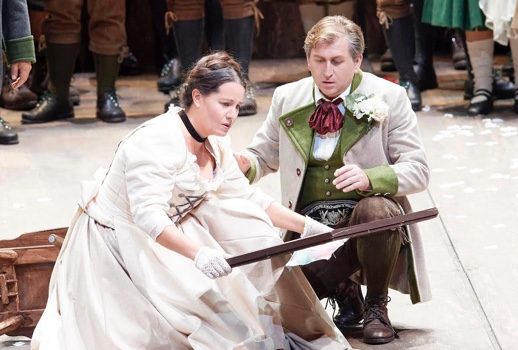 A revival of Andreas Homoki’s Lohengrin descended upon the Wiener Staatsoper this month like American college students to Oktoberfest: loud, convulsive, not especially coherent and in full lederhosen and dirndls.

The site-specific (?) staging of Wagner’s feathery, mystical psychodrama might have seemed half-baked if it didn’t already seem so budget. Unfolding in Wolfgang Gussman’s wood-veneer box and in costumes (also by Gussman) that might as well have come from the window display at Lanz, the opera hardly breathes, much less gasps and thunders.

Lacking context (Brabant hardly seems like a dire place, Elsa seems barely menaced), Lohengrin’s arrival, a transformation from a vibrating swan prop (that whips the Bavarian barmaids that constitute the women’s chorus into a gyrating frenzy) into a just-hatched man (which seems more like an “add water and watch it grow’ situation), hardly connotes much.

The rather obvious staging exists in its own fairly consistent world, but it never pushes beyond to make any larger point – if Wagner only wanted to tell a story about a woman whose life is profoundly changed by a bird, he’d probably have just gone the Sesame Street or Hitchcock routes.

The production’s limited scope also removes almost all the agency from Lohengrin as a character, leaving Andreas Schager without much to do other than pour out streams of firmly-supported, theatre-enveloping vocalism amidst a load of upended tables.

While his Lohengrin knows one volume (loud!) and one mode of phrasing (a light attack that slides into notes), his unwarily committal and fate-conscious hatchling exuded a determined youthfulness that opposed directly the silvery color of his hair.

The monolithic confession of “In fernem Land” emerged as tenuously conversational but sat poised on a continuous musical through-thread – this Lohengrin had been through all this before.

Schager’s grimly assured Lohnegrin made Elsa’s arc all the more heartbreaking, and Elza van den Heever, in her role-debut run, knew just how to manipulate it. Putting her resonant, glinting, and gloriously consistent soprano to task, she depicted a transition across her encounter with the night of the swan with vibrancy, massaging the timid character into something more agreeable with her decisive temperament.

The result: a richly emotional Jungfrau who realizes, agonizingly and too late, she was undone by her naïveté. 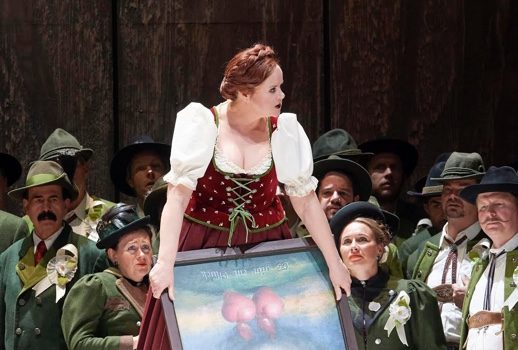 The study in contrasts between the characters continued with the Ortrud and Telramund of Petra Lang and Evgeny Nikitin. Lang’s crossed-arms and sneer proved an imposing physical presence, even if her wisps of voice and haphazard pitch didn’t overwhelm.

Though the proud-to-be-pagan sorceress found her “magic” here reduced to some roughshod palmistry, she easily intimidated her Macbeth-esque husband with a combination of grimaces and cackles.

The statuesque Nikitin responded aptly here, thoughtfully using his burnished, lieder-ready baritone (in terms of timbre, actually not so far off from Schager’s voice) in contrast to Lang’s more forceful delivery.

Kwangchul Youn’s dependably sonorous bass made an almost too-approachable Heinrich and as the King’s Herald, Clemens Unterreiner made an impression with German diction crisper than the crust on a good strudel.

On the Staatsoper website, Homiki framed this production as a “scaling down” of the story – a sense of scale was what I most sorely missed from Simone Young in the pit. The conducting had grandeur (and wall-shaking volume), but lacked the intimate dimension that gives the story such a convincing punch.

The Staatsoper Orchestra’s high strings deserve special praise here – they made good on an absolutely indispensable part of any Lohengrinperformance.

Lohengrin challenges the musical forces presenting it to toggle easily between a swans down comforter and a single feather in its moods – wrapped in wool coats instead, Homoki’s Lohengrin just seems rather the ugly duckling.