Santuzza in a kimono

The whole performance reminded me of what Butterfly as I have never known it, but often herad about it, can be. 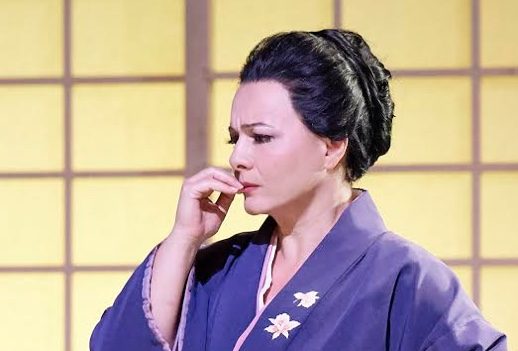 As I approached my fifth Madama Butterfly of the year, I was somewhat skeptical as to what else I might get from the piece so soon after seeing it for the last time, in the United States, in August.

I shouldn’t have been so silly to wonder – from her very first entrance onto the Wiener Staatsoper stage, descending the 60-year-old stone steps of the Staatsoper’s antique Josef Gielen production more like Dolly into Harmonia Gardens than a nervous Japanese geisha into her arranged marriage to a foreigner, Lianna Haroutanian unexpectedly assured me that I should have no concerns.

As an opera fan, I’m very much a product of my generation. When it comes to Butterfly, that means that I’ve gotten my feet wet on productions that (justly) prioritize and/or seek to deal directly with the opera’s one-sided depiction of Japanese culture and the optics of demonstrating that onstage. Butterfly has never been truly sold to me as a verismo opera – simply as its own, Italianate beast that needs a director’s very gentle touch to make palatable.

So I was wholly unprepared (and more than a little bowled over by) Haroutanian’s Santuzza in a kimono. The Armenian soprano, in her Staatsoper debut, was such a vocally rich and physically and dramatically extroverted Cio-Cio-San that it dispelled memories of most other recent interpreters and even stirred up some memories of the old ones (fans of Licia Albanese especially will not be disappointed here.)

She benefits from a technicolor instrument, packed with shadings and effects that she deploys frequently and with a painter’s facility. The voice is united across the range by a rippling, prominent vibrato that comes close but never obscures the text.

She used these traits to craft an outsize Cio-Cio San who seemed almost more Pinkerton’s fangirl than an abandoned teenager wiser than her years. It might not be as dignified as a full-tilt “con onor muore” type, but suddenly her naïve hope in and three-year wait for the return of the beloved American naval officer that purchased her made a bit of sense. And after watching a clip of

fangirls in action, it made even more sense.

He might not be John Lennon, but Teodor Illincai’s gently, sympathetically acted but confidently sung Pinkerton also made Butterfly’s blind optimism understandable.  While his central range is a shade paler, trumpety high notes, rounded, even, and secure, boom out with an authority and clarity of diction always desired but seldom delivered by his peers.

This comparison didn’t favor Gabriel Bermúdez a Sharpless whose light baritone was pretty consistently covered by the orchestra. This is probably a good time to mention Jonathan Darlington’s conducting –heavy on dramatics and bombast and light on any of the finer details, it was some of the most singer-hostile conducting I’ve heard.

When the lithe Staatsoper Orchestra wasn’t threatening to drown the singers in the Great Sound Wave off Kanagawa, it was frequently beats behind or ahead of the soloists (notably in Butterfly’s entrance, Sharpless’s letter scene, and the Flower Duet) that held steadfast throughout. I know we’re in Vienna, but I didn’t come expecting to hear Bruckner.

Elena Maximova’s rather nondescript Suzuki proved to be a shrinking violet when up against Haroutanian’s geisha and Herwig Pecoraro, a rather wobbly and self-congratulatory Goro, reminded one of how nice a good, oily comprimario can be in that part.

In fact, the whole performance reminded me of what Butterfly as I have never known it, but often heard about it, can be. It just took until now for me to push open the midcentury modern shoji screen to see it.