Have I got a girl for you

I was floored to find that Company with a female protagonist, at least in Marianne Elliott’s West End production, is a better and more complete show than original recipe Company. 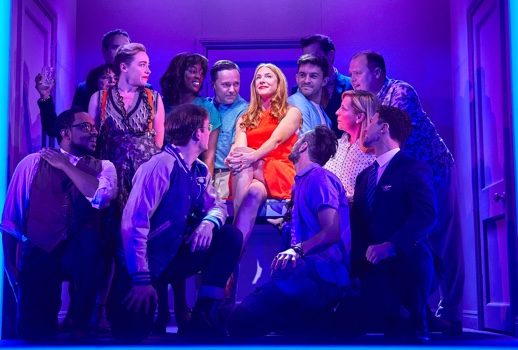 My honest reaction when I heard that a reverse-gender Company was being planned for the West End was exhaustion. Like, is this what we’re doing now, Sondheim-wise? At what point should we just admit we’re bored with the work?

What’s next, Mandy Patinkin manically serving meat pies and Cockney diphthongs as Mr. Lovett? Donna Murphy finishing the hat in Sunday in the Park With George (But It’s a Lady George Like George Sand)? Anthony Roth Costanzo shrieking with righteous fury as the Warlock in Into the Woods, no transpositions required?

Actually, I’d probably see all of those.

Anyway, my point is that giving Company the Bobby-to-Bobbie treatment seemed like the kind of high-concept one-and-done directorial stunt you see a lot of in European productions of standard-rep operas and plays. You know, Rigoletto on the Planet of the Apes, or A Doll’s House where the men are all four feet tall—the kind of production that, when it works, illuminates some submerged theme in the text, and when it doesn’t, is at least fun to talk about over drinks.

So I have to admit that I was floored to find that Company with a female protagonist, at least in Marianne Elliott’s West End production, is a better and more complete show than original recipe Company. And honestly (this is really where I have to assure you that jet lag and airplane wine are not writing this review for me): I think this version of Company, which has revised lyrics by Sondheim, has the potential to take over as the definitive Company because it is a superior way to perform the show.

Elliot’s production is set in contemporary New York. The set is a series of small rooms that move forward or sideways or up from below the stage to suggest a city in constant motion. There are closed doors everywhere. At the top of the show, it’s Bobbie’s 35th birthday, and her married friends have gathered in her apartment to surprise her. Bobbie’s apartment is a small square with doors on each side. We return to this image several times throughout the show, with her married friends crowded around her and two large balloons overhead spelling out 3-5.

It’s clear that this is her moment of reckoning. We see the room and its balloons again several times over the course of the show, in different forms. Once, the balloons are so large there’s barely room for Bobbie. Later, the whole thing is the size of a dollhouse. The third time, it’s regular-sized but there’s a Bobbie double inside, surrounded by looming friends while the real Bobbie, Rosalie Craig, looks on from the edge of the stage.

Throughout the production, Elliot uses Bobbie’s friends, who wander in and out of private spaces, to externalize the ownership society feels over women’s relationship and reproductive choices. She doesn’t need to change the text to do it, either; there aren’t any monologues about the glories of motherhood or third-wave feminism. 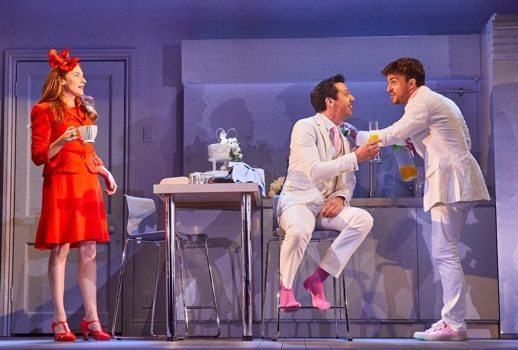 I’m just not sure people care all that much about a single man in 2018’s relationship choices. I’ve been 35 for several years now and nobody’s popping out of the kitchen cabinet to beg me to commit. But Bobbie’s friends’ level of investment in her dating choices, along with those ever-looming 35 balloons, just works with a woman in a way it doesn’t with a man.

It’s also all a lot more fun than it sounds, I promise.

The abstractness of the staging is a great fit for the show’s loose, revue-like format. There’s Patti LuPone as Joanne, immaculately armored in black Chanel, wandering uninvited through Harry and Sarah’s apartment, drink in hand, to deliver “The Little Things You Do Together” with Stritchian acerbity.

“Getting Married Today” is brilliantly staged and performed by Jonathan Bailey’s Jamie as the commitment-shy half of a gay couple. As he exhorts the audience to “go have brunch / cause [he’s] not getting married,” the minister and wedding celebrants keep bursting out of new and hilarious parts of his kitchen like an army of pastel-clad monogamy zombies.

The scene that follows, in which he talks about being a lapsed Catholic who doesn’t feel he deserves love from someone as good as his supportive fiancé Paul (Alex Gaumond), has a new and unexpectedly touching resonance coming from a gay man.

The “wives,” including Bailey as Jamie, now sing “Have I Got a Guy For You” to Bobbie while swiping on iPads with a frenzied sexual energy that may be familiar to any single friends of married or otherwise monogamous couples. (Love you guys!) The post-coital “Barcelona” plays out sweetly with the genders flipped, with Bobbie as the partner who really just wants to get some sleep and Andy as the sweet guy who’s too dim to realize he’s been dismissed.

One of the high points of the staging is “Tick Tock,” an instrumental that’s usually as a dance number for Kathy. Instead of Mr. Seadon-Young doing Donna McKechnie thrusts in a leotard, Elliott stages the number as a nightmare of monogamy. As Bobbie sleeps in her bedroom, debating how to get rid of Andy in the morning, she watches three Bobbie doubles and their respective husbands moving through the room. 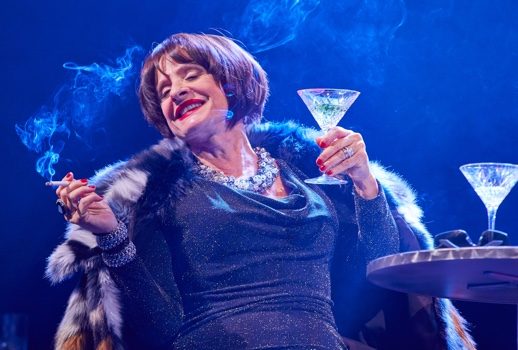 One is married to A.J., one to Theo, and one to Andy. One is pregnant and one has a toddler. Each of the couples goes through a mimed daily routine—including squabbles, stress, morning sickness and a toilet seat that’s left up—over and over again, their paths crossing as they crowd past one another in the tiny apartment.

The tick-tock sound in the percussion is not Bobbie’s biological clock but rather a terrifying expression of how long the seconds and minutes of ordinary life can feel when you’re spending them with the wrong person.

Bobbie’s three solos, “Someone is Waiting,” “Marry Me A Little,” and “Being Alive” take place in a vast, wide blue-lit empty space that provides a striking contrast to the confined interiors of the other scenes. Craig sings and performs each of them with a level of emotional fire we don’t see from her when she’s with her friends. This is Bobbie behind closed doors, and these are feelings she would never verbalize in front of anyone else.

The highlight of the revival comes in “The Ladies Who Lunch,” an incredibly great song that is, honestly, kind of a weird 11 o’clock number for a show about a man who can’t commit. It’s a clinical dissection of the way dissatisfied women delude and distract themselves, so when Bobbie is a woman on the verge of potentially choosing the wrong kind of life, it takes on a new dramatic primacy.

LuPone delivers the first verses of the song lazily and lightly, kind of like that friend who’s always at least a little drunk but also always slurs brilliant observations. It’s clear that this indexing of ladies who lunch is a bit Joanne does, satirizing her fellow wealthy wives who’ve committed the embarrassing transgression of believing their lives are at all interesting or unique.

But when she comes to the last verse and the line “Here’s to the girls who just watch,” she throws the words directly at Bobbie. This is who you’ll be if you’re not careful, she says. This is who you’ll be if you keep being a know-it-all observer and don’t let yourself want something more. You’ll be me. It suddenly makes perfect sense that Bobbie leaves her evening with Joanne and sings “Being Alive”—she’s seen what the alternative looks like.

LuPone is in great voice; that should probably be classified as miraculous voice given her age and the heaviness of the roles she’s sung for the past 40 years. Joanne’s line about feeling too old for young people and too young for old people gives a touching effect to her character, especially in “The Ladies Who Lunch” when she chokes back embarrassed tears at having aged into one of “the dinosaurs surviving the crunch” even though she knows it’s much more fashionable to be 25.

Look, I love Company. Long before I moved to New York, I was a teen Joanne in the Midwest, lounging in my caftans and planning a brunch on my cat’s behalf. It’s an incredible score. But this Company just works on every level in a way that it never has for me before, and it’s a tribute to Elliott’s talents that it feels like an undiscovered Sondheim show, not the umpteenth revival of a classic. Everybody rise!