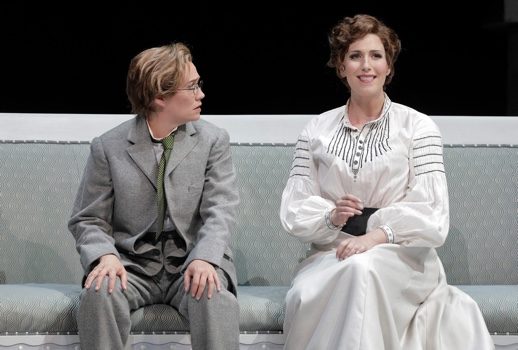 The time was 1927. Richard Strauss, desperate to have another hit after the failure of Die Frau ohne Schatten, asked Hugo von Hofmannsthal to create something new, “It may even be a second Rosenkavalier if you can’t think of anything better.”

Combining his past works Der Fiaker als Graf (The Carriage Driver as Count) and Lucidor, Hofmannsthal created Arabella, their sixth (and, eventually, final) collaboration. Alas, two years later, Hofmannsthal lost his son to suicide, and two days later he himself passed away from stroke.

Having worked Act 1 in great details together, Strauss practically set Act 2 and Act 3 intact as Hofmannsthal had left them. Eventually, Arabella premiered on July 1, 1933, when the composer was an aging 69 years old, just six months after Hitler appointed as chancellor.

Such was the troubled genesis of Arabella, which was seen by many Strauss fans as his “flawed” work, mostly because of the improbability of the plot and the dichotomy between the comedic farce and the serious topic of the text. Some claimed it to be second-rate rehash of Die Rosenkavalier.

Nevertheless, the audience of Strauss’ time still found the nostalgic outlook on the score to be appealing, and, per biographer Matthew Boyden, Arabella was Germany’s most frequently performed new opera between 1933 and 1945. It is still regularly staged in Europe, but not in US. This was the third-time San Francisco Opera staged Arabella, the last one was 20 years ago.

Coming on the heel of three hot-blooded Italian operas so far this season, Arabellaprovided an antidote to tragedy-weary San Franciscans. It helped that the opening performance was a winning one. However, it was such a pity that last night wasn’t very well attended.

Tim Albery’s well-travelled production, first seen in Santa Fe in 2012 (followed by Minnesota in 2013 and Toronto last year), moved the setting from 1860 Vienna to the period before World War I, just like pretty much every staging of this opera. (I would love to see a production that actually set it back in 1860 Vienna). This was the world ready to go to war; stark and grey were the operative keywords. There was unfinished (or decaying) quality to Tobias Hoheisel’s set, which consisted of three configurable and detailed curved walls that framed the three acts.

A circular staircase, mandated by the libretto in Act 3, was introduced in Act 2 and prominently placed center in the next act. A giant faded picture was hang on the left for Act 2, the ballroom scene. This was also very well-directed performance; every placement of singers on stage was intentional and every movement served a purpose.

Conductor Marc Albrecht, music director of Dutch National Opera who made house debut last night, was no stranger to Arabella. He conducted DNO production of Arabella four years ago (in Christof Loy staging) and subsequently recorded it with the same cast.

The familiarity showed in his reading; brisk and exciting, almost breathless, for the first two acts, and he expanded for the crucial final act. I personally enjoyed the pace, but I could see if people had problems with it; the swift tempo made the opera seem to be less “grand” and have more whimsical quality to it.

The slower third act felt more poignant, bittersweet even, especially during the final duet. It was very tender, touching moment that let the audience leave the opera house feeling good.

Ellie Dehn, fresh from performing the title role in last year’s Manon, returned for more role debut as Arabella. I think her voice was well suited more for Arabella than Manon; she sounded more at ease and less strained at the top. She looked believable as a young woman entering adulthood and as the center of attraction of the Viennese suitors, and she moved with poise and grace required for the role.

I have yet to be disappointed with Brian Mulligan’s acclaimed performances in SF Opera, and his role debut as Mandryka adds to his list of successes here; his was a sensitive reading, and he looked and acted awkward and out of place among the Viennese bourgeois, perfect as the rich country bumpkin. He developed great chemistry with Dehn; completely transfixed to her throughout Act 3.

The juxtaposition between her world-savvy attitude and his “fish out of water” mannerism was obvious and very ravishing to see. If I might nitpick, interestingly that his “rage” towards the end of Act 2 was strangely unconvincing, especially given that he was usually super intense.

Heidi Stober, who premiered the role in Santa Fe six years ago, once again inhabited Zdenka with vigor and clarity, and she absolutely looked like a boy donning Zdenko’s clothes! To complete the four lovers, Daniel Johansson, who made house debut as Matteo, sang earnestly, if less than smoothly.

Richard Paul Fink stole the show every time he was on stage; acting as the comic relief of the evening. The audience lapped up his many sarcastic quips and he performed them with great timing. As his wife, Michaela Martens proved her acting chops, equally comfortable in comic roles (she was truly impressive as Klytaemnestra last year).

The rest of the cast was filled with many SF Opera regulars, and they were largely fine. Strikingly, The Fiakermilli, sung by Hye Jung Lee, was dressed in the only bright color costume in the cast, in red, and she pranced around the end of Act 2 as if Zerbinetta decided to jump ship!

In the end, this was a great evening at the opera; beautiful singing, thoughtful staging, lovely melodies … a perfect escape from daily life.