Imagine you are at Disneyland, and there’s an Anthony Roth Costanzo ride. 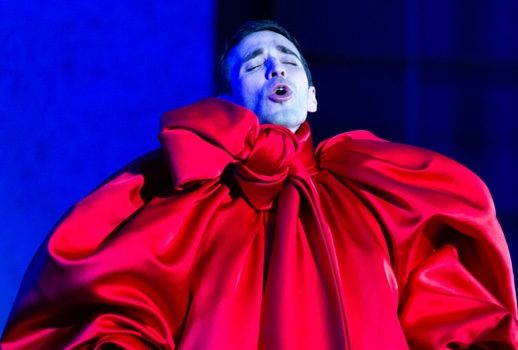 If Glass Handel were simply a one-performer concert—that’s only the beginning, but stay with me for a minute—even that would be intrepid, since it combines music by two composers, most of it pretty far from the mainstream, at seemingly opposite polarities of history and style.

As it turns out, Anthony Roth Costanzo’s solo mini-opera that mixes selections by George Frideric Handel and Philip Glass is only the tip of the iceberg. Costanzo, one of today’s star countertenors, is also an arts curator, missionary, spirit guide, and impresario. He has the zeal to bring his enthusiasm to the public, and the Rolodex to make it happen, with production partners Visionaire and Cath Brittan.

For the O18 Festival, Costanzo been given free rein to develop an evening that pulls all of this together…  and he’s delivered on a scale that must astonish even Opera Philadelphia.

But first, you must picture it—and I need to help you do that without spoiling it. Here goes:

Imagine you are at Disneyland, and there’s an Anthony Roth Costanzo ride. Not unlike, say, “It’s a Small World,” it will carry you through different lands in which you’ll sample new things.

In Anthony’s World, the centerpiece, literally and conceptually, is his quite fascinating performance of Glass Handel. But also on the ride you’ll find videos by major film artists (James Ivory and Tilda Swinton, among others); also, interpretive ballet (the blue-chip collaborators here include choreographer Justin Peck, and—be still my heart!—David Hallberg, who is one of three terrific dancers appearing live (the others are Patricia Delgado and Ricky Ubeda).

But wait, there’s more. In a huge lightbox not far away, artist George Condo creates a quite elaborate drawing in front of your eyes. (Really, he’s pretty amazing.)

Got it? A few more details. This isn’t Disneyland—at O18, it takes place in the grand hall of the Barnes Foundation. The whole thing lasts around an hour. And since there are no little cars or a conveyor belt to move you around, a fleet of human beings have been employed to scoop you up, chair and all, and transport you from place to place. These ultra-cool movers become part of the show, and their careful choreography is both fun and (to me, at least) weirdly disorienting.

I’ve probably said more than I should about the structure of the show, and truly I think the videos, dance sequence, and painting speak for themselves. 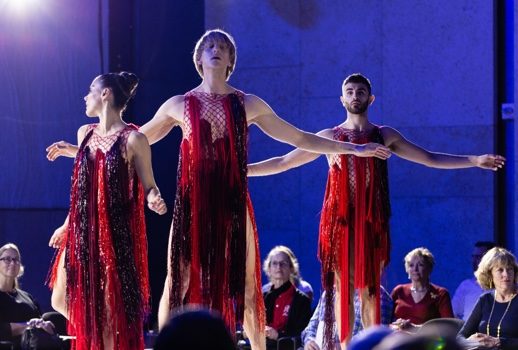 But I’ll say more about the musical performance, especially since Costanzo is the raison d’être here. He’s a compelling stage presence, with a slightly naughty, almost childlike impishness that is emphasized by a huge initial costume that accentuates his slightness. I instantly thought of the inflatable suit Woody Allen wore in Sleeper, but since it was designed by Raf Simons of Calvin Klein, no doubt it’s much chicer than that.

Over the course of the show, Costanzo makes a couple of wardrobe changes, each time into something almost caftan-like. There is a deliberate and very piquant fluidity in the depiction of gender throughout Glass Handel, not least a fundamental element of Costanzo’s reedy, haunting countertenor.

As for the singing, he has a rock-solid technique that allows him to sustain a pure, vibrato-less legato (heard to especially good effect in Handel’s “Lascia ch’io pianga,” one of the most familiar items on the program), and also to easily negotiate virtuoso passage work across a wide range (showcased in “Vivi tiranno”).

But if the Handel arias are familiar turf for countertenors, the Philip Glass material is more unexpected. I have not generally been a fan of Glass’s repetitious, circular style, but much of the music heard here is lovely and accessible, and suits Costanzo to a T.  A piece called “Liquid Days” was particularly gripping; also “The Encounter,” a vibrant excerpt from 1000 Airplanes on the Roof that gave the evening a suitably exciting climax. Throughout, Costanzo is alive to the nuances of the text.

Conductor Corrado Rovaris led the excellent orchestra; together, they moved effortlessly across centuries and styles, sounding idiomatic throughout.

In addition to the three performances that Costanzo offers in Philadelphia for O18, he’ll offer the program four times in New York at Saint John the Divine in late November.

After that, who knows? Given the complexity of the show and the participants involved, this will likely not be seen again, at least not in quite this form.

I can certainly imagine Costanzo doing the Glass Handel central portion in a more conventional concert frame… and some audiences will likely prefer it.

To me, hours later this show already has taken on the odd did-it-really-happen? quality of a dream. I can’t say I loved every minute of it, but I’m glad I saw it. It certainly lent a luster to Festival O18 that will be hard to follow.