Orfeo’s  latest edition is a 1978 performance of Lucia di Lammermoor with a very estimable cast that on its surface may seem a tad mundane but the extensive liner notes (with performance photos) tell the story of why it held such magic. 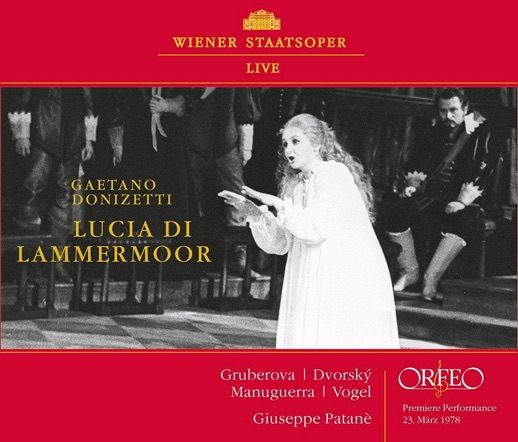 I have become a huge fan of the Vienna Staatsoper LIVE series on the Orfeo label. They’ve been mining jewels of great price from live relay performances from not only Vienna but Bayreuth and the Bavarian State Opera in Munich.

Orfeo’s  latest edition is a 1978 performance of Lucia di Lammermoor with a very estimable cast that on its surface may seem a tad mundane but the extensive liner notes (with performance photos) tell the story of why it held such magic.  Apparently Donizetti’s bi-polar (we can call it that now right?) newlywed hadn’t graced the stage of the Staatsoper since La Scala visited in 1956 with Callas and Karjan for three performances.

The quality of that presentation was so staggering that the Viennese saw little point in waiting for lightning to strike twice and closed the score of Lucia for nearly a generation. Two decades later the Intendant thought it was high time for a new production and culled a cast of promising young singers backed by some veteran talent.

In but the infancy of her now legendary, century-spanning, career Edita Gruberova was well known to coloratura fanciers for her formidable Queen of the Night and dizzying Zerbinetta. She had enjoyed a massive success with the later the year previous in Vienna under Böhm (also an Orfeo release)  and was reigning over every Zauberflote she could be coerced into. Her being cast as Lucia in a new production was an auspicious occasion. Her Edgardo was fellow Slovakian Peter Dvorsky who had been happily tenoring away over at the Volksoper and had recently made his Staatsoper debut as The Italian Tenor in Der Rosenkavalier.

Baritone Matteo Manuguerra was chosen to play Lucia’s rapacious brother. Tunisian by birth he didn’t begin proper vocal studies until the age of 35 and here he’s caught in his prime. Investing his portrayal of Enrico with equal parts of muscle and menace. One of my all time favorite voices he’s surprisingly well represented on commercial recordings if you snoop a bit. He was Muti’s Nabucco, Scarpia to Vishnevskaya’s Tosca, and even Papa Germont to Sutherland’s autumnal (o.k.,Decembr-ish) Violetta.

Siegfried Vogel was lured over from the Wagner wing to take on Raimondo and the young Thomas Moser rounded out the cast as hapless tenor bridegroom Arturo.

Giuseppe Patané was given the baton duties and he was another astute, if underrated, choice. Coming into his own at the time with a great ear for detail and a keen accompanist. I recall his emotionally devastating recording of Puccini’s Butterfly on the Hungarton label from the early ‘80’s that introduced us to Veronika Kinceses’ fragile geisha and Dvorsky’s perfectly Italianate American sailor. It’s a performance I return to regularly because of its poise and the clear architecture of its conducting.

Here with the Viennese in the pit Patané has them spinning gold. Leaving Lucia off the playlist for so long seems to have reaped rewards in the amount of the detail and care that’s shown, not only in the rhythmic accompaniment but, in the beauty of the playing. They have the right martial fire for Donizetti and the orchestra, and chorus, attack the party scenes with a real verve and sparkle. A rare trick and perhaps because of this abundance of finesse this could possibly be the best played Lucia I’ve ever heard.

Regrettably we get the standard performance edition with all the established snips in the stretta’s and the repeats. We do, however, get the oft-omitted “Wolf’s Crag” scene at the top of Act III and a fetching and individual harp solo prelude to Act I, Scene II.

Manuguerra starts us off with a bang, literally, with “Cruda, funesta smania.” He brashly strong arms his way through his opening cavatina and (what’s left of) the cabaletta. A snarling mustache twirler of the first rank in the interview with Lucia in Act II  he really hits his stride in the “Wolf’s Crag” where he matches Dvorský on their final A-natural and it’s something to hear. He even manages to dominate parts of the Sextet where frankly I’ve never heard the baritone singing before. I wouldn’t call him inelegant per se but I think “imposing” would be the best word I could use to describe his performance.  It’s Bull Canto and I love it.

Those looking for elegance need glance no further than our tenor. He’s a consistent font of warm Mediterranean sound and he shows exemplary attention to the details of phrasing while remaining youthful and ardent. That said he’s a little careful in the “maledetta” section where he denounces Lucia in front of the clan and the only tenor I’ve ever heard who doesn’t take the highest option there in the penultimate phrase. I don’t know the score well enough to say if it’s an “option” or just an unwritten “tradition.” Either way it’s exciting enough and his final scene is one of the best I’ve heard. In another nod to the quality of the orchestra the strings under his “bell’alma innamorata” are bewitching.

I had a dear friend who was an absolute Gruberova zealot while I remained lukewarm to her particular brand of pyrotechnics. He would have loved this recording.  She keeps everything super legato and generously uses those pinpoint messa di voce attacks in the upper quadrant of the voice that she’s so famous for. The voice is focused so high as a matter of fact that the bottom is kind of good for nothing. She proficient and musical in the opening scena and duet and Fleet and nimble in the many decorations but never surprisingly so.

She sings the standard Marchesi “Mad Scene” cadenza as transcribed by Estelle Liebling in the Ricordi score and I myself was hoping for something a tad more virtuosic from Ms. Gruberova and Maestro Patané. The flautist (who goes un-named in the booklet along with the harpist) does a nifty little trill at the finale that , unfortunately, steals the spotlight momentarily from Ms. Gruberova and her E-flat. I recall a CBS recital album where her cadenzas were so opulent that you’d swear she was being paid by the note.

Still she’s mesmerizing on the word “Edgardo” which is as it should be (since she repeats it so many times) and you can hear some stage play with the knife at the beginning which is exciting. She slides around a bit here and there and I understand it’s her technique but I find more control than abandon in her singing. Not that it shouldn’t be well thought through but the calculation robs her singing of immediacy at times. Her “Si” to acknowledge her signature on the wedding contract when confronted by Edgardo is pallid. But I quibble, There’ s no question she presents a magnificent assumption of the role and this being her breakout performance surely justifies it’s inclusion in this series.

Needless to say her fans are out in force although it is the politest audience I think I’ve ever heard. They literally wait until the very last note of music to burst into raptures and it’s also apparent, from those raptures, that there are calls after every scene.

Stereo sound quality for 1978 is near ideal and there’s an excellent balance between stage and pit. Not a plush acoustic but a true sound and it gives an excellent idea of the weight of the voices next to one another. As I’ve mentioned orchestral detail is first rate for a live relay.

There’s a booklet with a very fine essay on both the genesis of the production and the singers which goes into detail about how they were cast. Extensive theatrical portrait and production photos which was very traditional because it looks like there was a fire sale on antimacassars.

For fans of Gruberova I’d say this is a must have. I sampled her two studio recordings from 1983 under Nicola Rescigno and 1991 with Richard Bonynge. The earlier finds her in the first bloom of youth but surrounded by veterans where in the latter her singing has become more precious but her co-stars are easily judged more vital. Comparing all three this new set finds her the most ably partnered and in the best voice by far.