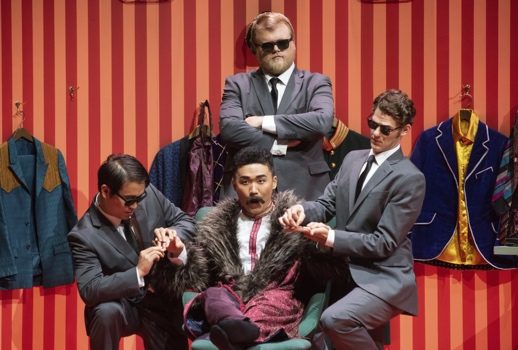 Late summer in SF usually means time for Merola Opera program’s two staged opera productions. The prestigious opera training program, which celebrated their 60 years’ anniversary last year, is still going strong to be “a proving ground for the future of opera,” as mentioned in their tagline.

As the first of the 2018 opera productions last Saturday, the Merola Opera Program chose Mozart’s rarely-performed early serenata, Il re pastore (The Shepherd King), written by the 19 years old Mozart as a homage to Archduke Maximilian Francis. The libretto was by Metastasio, edited by Giambattista Varesco (who subsequently wrote the libretto for Idomeneo).

The story, with its two pairs of lovers, will definitely bring in mind of Mozart’s own Così fan tutte, although thematically its struggle between love and power is closer to Idomeneo. It is in opera seria form, and Mozart filled the score with much energy and enthusiasm. He demanded agility of most of the five principals, and he filled their arias with many tour de force coloratura passages.

Tara Faircloth (herself a 2006 Merola alumna) treated this opera more like an opera buffa (akin to Così) and staged it in a whimsical manner that provided a lot of fun to the audience throughout the afternoon. The staging might have less dignified than what was intended (this is, after all, story about kings), but judging from the response of the audience, they didn’t mind.

As past Merola productions, the stage was elevated podium behind the orchestra (as there is no orchestra pit in SFCM Hall). On that stage, there were two curved walls, the taller one covered with grass with a cute green house on top, and the shorter wider one covered with stripes.

A staircase was connected to either one of those walls to help the singers going up and down the walls. The walls and the staircase were moved back and forth by the four supernumeraries (who also acted as Alessandro’s bodyguards). In the second act, the tall grassy wall would turn over to reveal Alessandro’s colorful dressing room.

Faircloth had a lot of clever ideas for the staging, and most of them worked. Alessandro (yes, thatAlexander the Great) was shown to have four bodyguards, dressed in overcoats and sunglasses (as in spy movies). He himself was dressed in some kind of military attire, and for the last scene, adorned with a cape.

Similarly Agenore was dressed in military attire, although less complex than Alessandro’s. Aminta, Elisa and Tamiri was in colorful everyday clothes, with bright colors. Tamiri changed to a wedding gown for the last scene.

One aspect of the staging that I found intriguing was that the women (both Elisa and Tamiri) were shown to be really dominant against their male counterparts (Aminta and Agenore), up to the point that Elisa was physically bullying Agenore when he refused to let her to meet Aminta at the beginning of Act Two.

To me, that scene, while funny on its own, felt of out of place, as the action up to that point was very mild and light-hearted. However, the performance recovered well, and it went back to being light-hearted till the end.

Of all the five principal singers, I was most impressed with tenor Zhengyi Bai as Alessandro. His warm bright voice was beautiful, and he imbued his character with dignity and charisma, while at the same time still had playful quality to it. He handled the demand of the role effortlessly as well, and he looked like he had so much fun doing it. In Merola’s website he listed that his roles included Nemorino, Oronte and Count Almaviva, and I think he would perform well in those parts.

The mezzo-soprano Simone McIntoshsang the soprano role Tamiri confidently with her dark voice, providing much needed contrast with the other two sopranos. Equally, soprano Patricia Westleytackled the role Elisa with bravado. With her bright pink dress, you couldn’t miss her every time she was on stage. Both tackled Mozart’s demanding arias pretty well, and had a lot of fun doing it.

Unfortunately, I felt that the direction left the two male roles rather less shining. Tenor Charles Sy made a very melancholic Agenore, which was perfect for this performance but made his performance rather unmemorable. As the title role, I felt that soprano Cheyanne Coss struggled with the tessitura of the role, particularly during the fast and high flying coloratura passages. She fared better on the more lyrical arias, and her duet with Elisa at the end of Act 1 was really wonderful.

When this performance was announced, I was most excited to read that Stephen Stubbs, one of the two Music Directors of Boston Early Music Festival, would conduct this performance. I loved pretty much everything I heard from BEMF. For this performance, I felt like while his conducting was fine and he kept the things going, it wasn’t as special as I would have imagined. (I had been listening to the Harnoncourt recording to familiar myself with this opera). I guess he would have been more “zippy” if he conducted his period band.

All in all, it was a fun afternoon at the Opera, and a great start for 2018 Merola Opera Program. Now, onward to Stravinsky’s The Rake Progressin two weeks’ time!