In have a special admiration for singers who can perform well in French. The reasons include both a personal bugaboo (I can remember almost choking over the word gloire the first time I ran across it in a choral piece), and the technical difficulties that the language imposes on any singer. Executing the complex range of dark vowel sounds and schwas requires near perfect control over vowel shape and inflection, even as the high dramatic content of so much of the French repertoire gives a singer plenty of other things to think about.

When it comes to this sort of virtuosic mastery of the language and its music, few do it better than Italian soprano Anna Caterina Antonacci. In her recent half-recital-half-opera performance at San Francisco Opera Lab featuring Francis Poulenc’s monodrama La Voix Humaine, she delivered a tour de force of French diction, subtlety of phrasing, variation of vocal timbre, and white-hot stage acting. Antonacci, along with an equally imaginative musical dramatist at the piano, Donald Sulzen, presented an emotionally raw and musically superb evening of French repertoire.

The centerpiece of the program was La Voix, a 1959 collaboration between Poulenc and the modernist writer and artist Jean Cocteau. It is comprised entirely of one side of a series of telephone conversations between Elle, a Parisian woman about whom we know very little, and an estranged lover. Her intent in the conversations is somewhat obscure: while she makes little overt attempt to convince her lover to return, and even acknowledges some guilt for the circumstances of their estrangement, there seems to be something about the simple act of speaking on the telephone that sustains her in her distress.

Though La Voix is a monodrama, the orchestral accompaniment at times seems to play the role of an interlocutor responding curtly to her entreaties and histrionics, while at others mirroring her own subconscious. The conversation is periodically interrupted by an erratic phone connection, progressively magnifying Elle’s desperation.

While Elle’s presumed domination of the conversation (she is singing the vast majority of the time) may be necessary in order for Poulenc to create a coherent musical piece, it begets a nagging doubt as to whether someone else is really on the other end. This doubt becomes especially pronounced in those moments—more frequent as La Voix progresses—when the accompaniment transitions from Elle’s dramatic counterpart to a reflection of her thoughts.

The advancing union of singer and accompaniment come to represent her mounting self-absorption and hysteria. Her psychological implosion reaches its climax in Poulenc and Cocteau’s twentieth-century version of Love Death, when Elle tells her “Cheri” that she has wrapped the telephone cord around her neck, simultaneously evoking the telephone as a stand-in for her lover and the looming specter of suicide.

Any musician who has played Mahler or Strauss knows the difficulty of sustaining and calibrating a steady crescendo, or an increase in intensity, over a very long time period. La Voix poses an analogous dramatic challenge, requiring the performer to calibrate an increase in dramatic intensity over a 40-minute period. Antonacci, however, pulled this off masterfully. With nothing to distract the audience from the protagonist—save a projection of a rain-blotted window overlooking the Paris skyline, a small round table, a glass of water, and the omnipresent telephone—she held forth with a performance that delivered all the subtle variation and nuance that the material allowed.

Her voice embodied the dreamy, smoky quality of French impressionism in moments of reminiscence, reached a full-voiced directness of tone in moments of passion, and took on a raspy, almost spoken quality as she interrogated the telephone operator over the spotty connection. Her pacing felt completely natural, never lingering too long anywhere, but occasionally pausing to enjoy the moments in which Poulenc’s austere musical atmosphere succumbed to his never-too-long-suppressed romanticism.

She even managed to punctuate the performance with a couple moments of comic relief, most notably as the paranoid Elle tells off a neighbor who she thinks is listening in on her phone conversation. Taken together, Antonacci’s wide emotional and vocal range raised this work from a melodramatic series of rants (which it risks in lesser hands) to the deep psychological exploration Poulenc and Cocteau envisioned.

Antonacci showed even further range in the recital portion of the program, which featured a short song cycle by Poulenc called La fra?cheur et le feu, Debussy’s cycle on Pierre Louys’ poetry Chansons de Bilitis, and Berlioz’ La mort d’Ophélie. In the Berlioz, Antonacci played the ballad singer, interspersing her descriptions of Ophelia’s death throes with baleful melismatic refrains. The Debussy moved her immediately back into a first-person role.

His highly sexualized, Ancient Greek-themed cycle showcased Antonacci’s luxurious rubato and intimate involvement in each word of the text. The program as a whole showed Antonacci to be a virtuoso of tone color and dramatic style, with the small venue and solo piano accompaniment allowing for even further nuance and coloration.

A word (or perhaps a paragraph) is warranted in praise of Sulzen, Antonacci’s accompanist. The power of a great collaborative pianist to deepen the dramatic impact of vocal music was on full display in La Voix, where the orchestral reduction required Sulzen to change musical language and dramatic identities at a dizzying pace. He played the ringing telephone (an incisive succession of quick repeated treble tones), Elle’s interlocutor, and a background to Elle’s thoughts.

At moments the score called for the tender, almost overindulgent approach of Poulenc’s early “cabaret bar” sound, at others an unfulfilled wistfulness and, at the conclusion, the throbbing subterranean, almost religious minor sound that Poulenc often used to evoke resignation and death. (A listener will hear the religious connection perhaps most clearly by comparing the final sequence of La Voix to the “Vidit Suum” movement of Poulenc’s Stabat Mater, composed just a few years earlier, in which a soprano, backed up by hushed choir and orchestra, portray Jesus’ death throes upon the cross.)

Sulzen negotiated these different topics in Poulenc’s music beautifully. He even managed to play Poulenc’s signature faux-blasé ending to the piece—a single very dry, staccato minor chord—in a way that rendered the ending far more devastating than a more traditional ‘well-prepared’ ending would have been.

It is easy to impress an audience in opera with the size of a production or the potency of a hall-filling voice. A performer demonstrates true mastery, however, when she is able to maintain our focus, attention, and empathy in a sparely-appointed room, with nothing but a table, a phone, and a hundred people staring intently into her eyes. This diminutive, semi-staged La Voix showed two artists so at home with the composition, Poulenc’s musical language (and, in Antonacci’s case, the French language) that their performance made an impact worthy of a far larger opera. 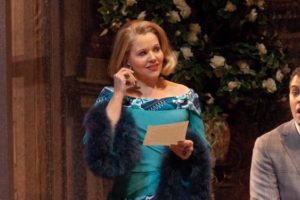