Don’t axe me why

The Metropolitan Opera’s much vaunted so-called “Tudor Ring” of three royal operas by Donizetti got off to a bumpy start Saturday afternoon with a revival of Anna Bolena that stubbornly refused to cohere either musically or dramatically. Conceived to showcase homegrown star soprano Sondra Radvanovsky, the Metropolitan Opera’s much vaunted so-called “Tudor Ring” of three royal operas by Donizetti got off to a bumpy start Saturday afternoon with a revival of Anna Bolena that stubbornly refused to cohere either musically or dramatically.

Bolena has been grouped with Maria Stuarda and Roberto Devereux (as well as Il Castello di Kenilworth, which the Met will not be performing this season) for no other reason than they all feature royal personages from around the same period of English history. Although Beverly Sills was not the first modern soprano to sing all three leading roles—that was surely Leyla Gencer—it was New York City Opera’s mounting of the trio for her along with her recordings that likely occasioned the “Tudor Ring” tag, one that has stuck for over 40 years.

When it was announced that the Met was mounting these operas for the very first time, there was a lot of speculation that the announced Anna Bolena, Anna Netrebko, would sing all three. That rumor was quickly dispelled when Maria proved to be Joyce DiDonato. However, I was perplexed when I learned that Devereux would star Radvanovsky and that she would headline the inevitable troika.

Whenever these operas have been produced by a major opera company it has nearly always been done as a vehicle for a star bel canto soprano—besides Sills, one thinks of Joan Sutherland, Montserrat Caballé, Mariella Devia, Edita Gruberová. Indeed these sopranos sang all three Tudor queens except Sutherland who eschewed Devereux’s Elisabetta. However at 46 and in her prime, Radvanovsky made her way to the top of the opera world as a Verdi soprano rather than as a bel canto specialist. She has said that her recent assumption of the role of Norma in Bellini’s masterpiece had encouraged her to accept the offer of the Donizetti queens. But wasn’t her Norma more of a throwback to big-voiced Verdi singers like Zinka Milanov or Ghena Dimitrova or even Maria Guleghina who took on the Druid priestess? Although I enjoyed much of her Met Norma two years ago, it scarcely seemed a harbinger of other bel canto roles for Radvanovsky.

And, indeed, for much of the first act of Bolena on Saturday afternoon I was shaking my head and giving quizzical looks to the friend seated next to me. In her first scene, the voice was just not flowing with the expected ease: the cavatina was inelegantly shaped, the cabaletta slow and labored. Subsequent scenes did little to dispel my alarm, particularly the famed “Guidici ad Anna” phrases in the first-act finale. Here and elsewhere, Radvanovsky’s familiar sins of cloudy diction and disdain of singing off the words suggested a troubling unsuitability for this role.

Possibly because she had finally warmed up or because it just contains better music, Radvanovsky’s second act showed definite improvement. The heated duet with Seymour sizzled and the trio with Percy and Enrico was nearly as effective. Much of the demanding final scene was cleanly and eloquently voiced; “Al dolce guidami” in particular was beautifully phrased, and her quiet singing more tastefully integrated. Earlier she frequently resorted to quickly fining down the tone to a near-whisper—more as a stunt than as a meaningful gesture indicated by the music.

Usually one can count on blazing high notes from this soprano and indeed she interpolated quite a number of them, but there were as many strident misfires as successes—a disastrous final E-flat squawk to conclude “Coppia iniqua” was the most jarring. Judging the famous succession of trills in that cabaletta was complicated by Radvanovsky’s prominent vibrato; one wasn’t always sure if she was trilling or just exaggerating that feature of her voice. I felt equally equivocal about Radvanovsky’s acting—never a charismatic performer, she failed to dominate the opera. Her characterization arrived in sentences, rather than chapters. Anna as victim came to her more naturally than Anna the proud queen, and the myriad emotions which cross Anna’s fragile mind during the “mad scene” failed to register. Her sudden lurches across the stage looked awkward rather than pitiable. Sir David McVicar doesn’t seem to have been much help to his leading lady, and, while this revival still looks quite handsome with its two enormous crowd-pleasing dogs, unfortunately it was mostly routine “stand-and-sing” business as usual.

One had to admire Radvanovsky for tackling of this daunting role; she could easily just keep singing lots of Toscas and Aìdas around the world. Perhaps later performances of Bolena will find her top register in better working order and maybe she’ll refine some of the more awkward interpolations and ornaments. It may prove illuminating to chart her journey through a season of Donizetti, on to Maria Stuarda and then to the role for which she seems best suited, Devereux’s Elisabetta.

Her erstwhile lover, Riccardo Percy, at least looked better than he did when this production premiered. During that run with Netrebko and Meade (both of whom I saw) I remember being distressed at Stephen Costello’s stage deportment. He shambled aimlessly across the stage rarely even looking at the singer he was addressing. This time, at least, he stood up straight.

Initially it seemed he might have conquered some of the issues that had been plaguing his singing in recent years. The voice retains its inviting Italianate sheen and gleaming virile high notes, but Percy’s challenges often were too much for him. The tessitura of his first aria proved a strain, and the athletic cabaletta of “Vivi tu” occasioned some missed notes. While Donizetti’s music might ideally suit him better than the Verdi and Puccini he’s been singing, Percy’s nearly defeated him—why then was he engaged to sing it again at this revival? Enrico isn’t the dominating role that one might expect— he has no aria although does anchor several important duets and trios. As before, Ildar Abdrazakov reveled in playing the villain, looking like a Holbein portrait come to life and strutting around the stage like every old movie portrayal of Henry VIII. While one might have liked more bass solidity than this lighter bass-baritone was able to offer, his otherwise was one of the more satisfying portrayals of the afternoon. Slim and strikingly tall and boyish, Tamara Mumford too returned as a touching Smeaton, but her lovely warm low register has grown even more detached from her tight reedy top than it was four years ago.

As at the 2011 premiere, Giovanna Seymour should have been sung by the glamorous Latvian mezzo Elina Garanca but once again she withdrew, this time due to the recent tragically early death of her mother. However, any disappointment turned to rejoicing as the Met was able to engage Jamie Barton, the rising mezzo who had had such a striking succès d’estime there two years ago as Adalgisa. Barton who had not been otherwise engaged to sing at the Met this season was luckily able to fold six of the seven Bolena performances into her busy schedule.

Giovanna is the first character one hears and her short, guilty arioso immediately introduced (or reintroduced) listeners to the arrestingly opulent quality of Barton’s creamy voice. She and Abdrazakov made something dramatically interesting of their often brutal duet which is unfortunately one of the score’s more pedestrian sequences. Her fiery, anguished scene with Radvanovsky was the afternoon’s pinnacle, although it was unconscionable that both singers omitted so much music in order to blast their admittedly crowd-pleasing high notes at the end. One wonders if bel canto will end up being a major part of this enormously promising singer’s career. The second-act aria was lovely but there was some unease in the cabaletta suggesting that florid music may not be her strength, and Giovanna’s high tessitura found Barton occasionally under strain. I was still extremely grateful, though, that Gelb and company had secured such a potent replacement for the elusive Garanca.

Marco Armiliato and his orchestra and chorus had a happier outing than they had had the night before at the mostly wonderful, occasionally harried Trovatore. Everyone stayed together, although the exhilarating stretta that concludes the first act threatened to run off the rails more than once. Bel canto does appear to play to Armiliato’s strength as an ideally supportive “singer’s conductor.”  But if one is going to mount this opera, why not do it with the musicological respect it deserves? The overture was omitted and there were troubling snips and “lay-outs” beyond that truly egregious one in the Anna-Giovanna duet.

One might want to catch Taylor Stayton when he subs for Costello on October 9and 13; the former date also sees Milijana Nikolic in for Barton as Giovanna. Radvanovsky next tackles Maria Stuarda (presumably minus DiDonato’s downward transpositions) opposite the returning Elza van den Heever and the debuting Celso Albelo in late January. McVicar concludes his production of this “Tudor Ring” with the Met premiere of Roberto Devereux in March with Radvanovsky hoping to repeat her Toronto success as Elisabetta while Matthew Polenzani and Garanca attempt to hide their illicit love from the jealous queen. 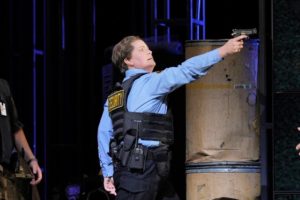