the young and the de young

Our Own Sanford reports from this afternoon’s National Council Grand Finals Concert at the Met.

First things first: No hunkentenors, but Edward Parks is a barihunk, and Christopher Magiera is almost a barihunk.

Now to the important stuff. There were nine singers in the final, and I would say that 10 of them deserved to be there. Patricia Racette was a charming host, who tried mighty hard to tell jokes (“How do you know a singerâ€™s at your door? They canâ€™t find the key and they donâ€™t know when to come in.”)

Here are the singers by voice type:

Carolina Castells‘ first aria was â€œOh, quante volteâ€ from I Capuleti. It was okay, and she certainly has the range to hit all of the notes, but there wasnâ€™t much in the way of emotion. Her voice was even throughout, without noticeable breaks in registers. The interpretation was generic. She didnâ€™t strike me as a bel canto singer. Her second aria was â€œKlange der Heimatâ€, from Fledermaus. It was like a completely different singer. She was funny, had great stage presence, and sang it extremely well; she seems like a natural for comic opera.

Simone Osborne began with Marenkaâ€™s Aria from Bartered Bride. It didnâ€™t make an impression on me as music or as singing, but her voice is bright and even throughout. I didnâ€™t think she was anything special, until she sang her second aria, which was â€œNo word from Tomâ€, from Rakeâ€™s Progress. Wow! Great aria, and the fast part has strong hints of Mozart. Itâ€™s a really difficult aria and she sang it really well, but I had trouble understanding the words.

Jennifer Johnson â€œMust the winter come so soon” from Vanessa she sang gloriously. I understood every word, and her voice is beautiful, very evenly produced. She looked stunning; she has red hair and wore a dark teal gown, which set off her coloring nicely. She sang â€œParto, partoâ€ next, from Clemenza di Tito, and rocked the house. Her coloratura was extremely well sung and articulated, without any aspiration or yuggayugga.

Daveda Karanas is going to be, I hope, a huge star. She gave the single greatest performance of the night, in the most difficult aria of the night, and got one of the biggest ovations of the night, for her first aria, â€œO pretres de Baalâ€, from Le Prophete. I can certainly understand why Marilyn Horne wanted this revived, because this aria alone is worth it. It has an enormous range and a lot of difficult coloratura, and Daveda was amazing. No breaks in register, no glottal attacks, gorgeous bottom, middle, and top, and great coloratura. The audience just erupted when she was done. She sang â€œWhen I am laid in earthâ€ from Dido and Aeneas next, and did a lovely job. Itâ€™s a much less spectacular piece than the first aria, but her sense of drama was wonderful.

Rene Barbera â€“ â€œAh, mes amisâ€ from Fille du Regiment. Bright voice, even throughout and perfectly suited to this rep. He tossed out the high câ€™s really well, with no hint of strain. He did equally well vocally in â€œUna furtive lagrimaâ€, but it was pretty standard dramatically. I will say this, though. At the end, on the phrase â€œAh, si morirâ€, he used a really lovely head voice, not falsetto, but gorgeous.

Dominic Armstrong â€“ â€œAh, la paterna manoâ€ â€“ Macbeth â€“ I got chills, both for this, and his second aria, Lenskiâ€™s Aria, from Eugene Onegin. His voice is rich and gorgeous, and evenly produced. I think heâ€™s going to be a big star. I donâ€™t remember what kind of audience response he got for either aria, but since I made notes on ovations for other singers, Iâ€™m thinking he didnâ€™t go over as well.

Edward Parks: â€œLâ€™orage sâ€™est calmeâ€, from Les Pecheurs de Perles. What a gorgeous piece of music and what a gorgeous voice. His voice isnâ€™t as bright as Reneâ€™s, but thereâ€™s no hint of baritone. He has a lovely, rich vibrato. His bottom is a little weak, but the middle and top are stunning. He also got a huge ovation. Next up was â€œMein sehnen, mein Wahnenâ€, from Die Tote Stadt. The climax of the first aria was thrilling, and the last note of the Korngold was held forever, and faded until the very end. He has beautiful control of his voice. I wish Iâ€™d sung these arias back in the day.

Christopher Magiera â€“ â€œHai gia vinta la causeâ€ (Nozze di Figaro) and â€œE allor percheâ€ (Pagliacci) â€“ He was quiteâ€¦okay. Some notes were completely inaudible in both arias. He sang the Mozart well, with good coloratura, but no trill. The Leoncavallo was pretty boring.

Stephen Ray â€“ â€œCome Paride vezzosoâ€ (Lâ€™elisir dâ€™amore and â€œA woman is a sometime thingâ€ (Porgy and Bess) â€“ I thought his stage business during the Donizetti was pretty clichÃ©d, if not downright amateurish. He buffed his nails and signaled the conductor to start playing, both to show Belcore as conceited I guess. The singing didnâ€™t impress me, either. Very ordinary. And Iâ€™m not sure why he would even include the Gershwin on his list of arias; the whole thing is barely 2 minutes long.

My top three: 3. Jennifer Johnson, 2. Dominic Armstrong, and 1. Daveda Karanas. I didnâ€™t know how many winners they would pick, so I would also have been happy with Rene Barbera and Edward Parks.

Winners, in no particular order: Rene Barbera, Jennifer Johnson,Daveda Karanas,Simone Osborne and Edward Parks. So I picked 4 out of the 5 eventual winners.

The orchestra played all of the music exquisitely, and Stephen Lord did a fine job conducting. I was sitting dead center on the aisle (Row C, 123) in the balcony. I have read various things about the acoustics in The Met, where depending on where you sit, you might not hear as well as in other spots. The sound where I was sitting was wonderful. The guest artist was Michelle DeYoung. I personally thought that Daveda Karanas sang her off the stage, but she was rapturously received in â€œAmour! Viens aiderâ€ and â€œDu bist der Lenz.” She apparently has no gay friends, because her hair is blond and frizzy (it looked a little like a fright wig) and her dress was fugly and unflattering. (However, all but one of the other womensâ€™ gowns were beautiful.) 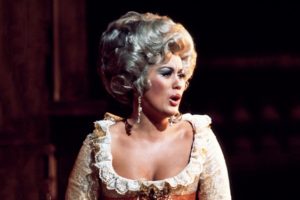