What happens when you attend a performance and it doesn’t engage you? 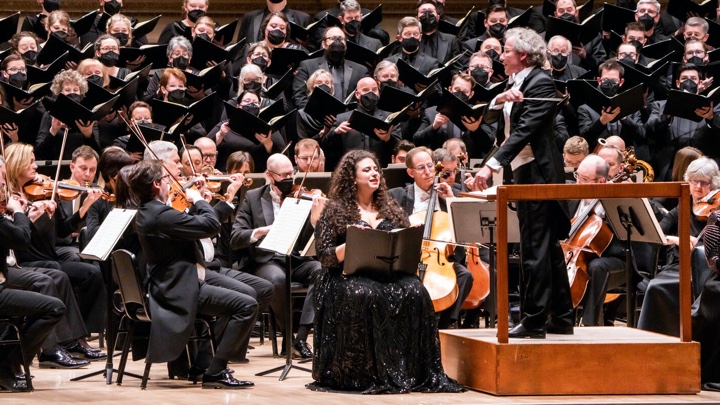 I hadn’t expected to confront that question when I attended the Cleveland Orchestra’s concert at Carnegie Hall last week during which Franz Welser-Möst conducted Berg and Schubert. But both during the event and after it I found myself ruminating on factors that sometimes distract from my music experiences.

The major work on the Cleveland program was Schubert’s expansive E-flat Major Mass, the composer’s final sacred work. Featuring five vocal soloists and chorus and lasting nearly an hour, its performances at least in the US remain rare. In the past half century though it’s been recorded by conductors from Wolfgang Sawallisch and Nikolaus Harnoncourt to Carlo Maria Giulini and Claudio Abbado.

Eagerly anticipating the Carnegie Hall concert, I sought out a recent Salzburg Festival broadcast led by Riccardo Muti and featuring Krassimira Stoyanova and Michael Spyres among its soloists. I then featured it on a recent Chris’s Cache installment.

As Welser-Möst’s rendition progressed, I wondered why I wasn’t liking it very much. Then I recalled that I’d experienced the Salzburg broadcast the way I listen to a lot of music: It was playing while I did other things. When I’m at home reading or writing, cooking or just scrolling through my phone, music is nearly always playing. Sometimes a piece will prompt me to stop what I’m doing to focus solely on it, but otherwise I’m likely not concentrating on what I’m hearing.

I find that—for better or worse—I absorb LOTS of music that way. I enjoy investigating music as widely as I can rather than digging deeply into a narrow repertoire. For example, though I try my damnedest, I can hardly keep up with all the broadcasts and commercial recordings of baroque vocal works.

Most of the time I stream on Spotify or play mp3s on my computer. But when I want to know something well, I sit down with headphones and listen without interference, preferably on CD which I continue to prefer. My current obsession is the revelatory three-disk Alpha Classics set of Rameau’s first version of Zoroastre. 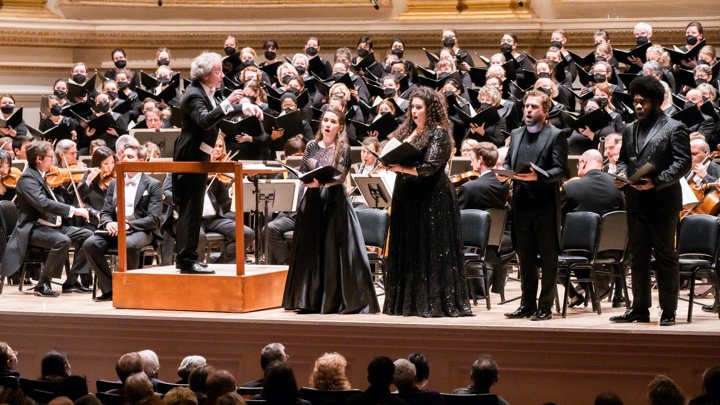 If you’d have asked me about the Schubert mass prior to the concert, I would have said I was eager to hear it live. But “trapped” in my Carnegie Hall seat, I realized I was truly experiencing it for the first time. My long-held prejudices against most German Romantic repertoire resurfaced in full force.

Despite the earnest music-making, the long-winded mass felt dutiful and uninspired. The soloists—soprano, mezzo, two (!) tenors and bass—had little to do. They don’t perform at all during the “Kyrie” and “Gloria;” only during the “Credo” (20 minutes into the mass) do we get the lovely soprano-double tenor trio which is the work’s brief highpoint.

As a non-fan of Brahms’s Ein Deutsches Requiem, I might have predicted that an earlier 19th century German choral piece wasn’t going to work for me, but my inattentive pre-concert listening had fooled me. I hadn’t learned from earlier experiences.

Working on my PC a while back, I was enjoying a recent recording of Bononcini’s Polifemo. I’d noted only high female voices before remembering that a buzzed-about new countertenor was in the cast. My bad: I hadn’t noted Bruno de Sá, the amazing young Brazilian, and needed to replay—with pleasure—the entire thing!

As the Franzes (Schubert and Welser-Möst) weren’t captivating me, my attention wandered focusing on the mass’s five soloists. Before they entered, the chair placement caught my attention: four were placed to the conductor’s right with a single chair on his left. Joélle Harvey, Julian Prégardien, Martin Mitterrutzner and Dashon Burton then took their places together with Daryl Freedman seated by herself.

Having enjoyed many Verdi Requiems and Haydn Creations, etc., I’ve witnessed countless singers staring blankly into the auditorium clutching their scores and awaiting their cues. Unlike the unified four, and perhaps because she was seated alone, Freedman noticeably did her own thing. Smiling brightly and seemingly ready to burst into giggles, the mezzo for the first solemn 15 minutes of the mass surveyed up and down in awed wonder the large expanse of Carnegie Hall.

Perhaps because the vast Cleveland Orchestra Chorus wore black masks, it was difficult not to fix on Freedman who after the “Credo” exchanged seats with Mitterrutzner. In their brief, undemanding duties, all the soloists did well, particularly the handsome Prégardien who tended to gaze at the floor and smolder when not singing.

Before the mass, the opening mashup of three pieces from Berg’s Lyric Suite interwoven with Schubert’s Unfinished Symphony’s two movements proved provocatively arresting, with the Schubert particularly ravishing under Welser-Möst’s elegant and precise baton. But unexpectedly, the concert served mostly to severely chasten me: I should try to be a better, more attentive listener.

WQXR broadcast the concert live and I’m including the five-minute “Et incarnatus est” trio from it here.