We constantly wonder whether the young man will embrace him—or slit his throat. 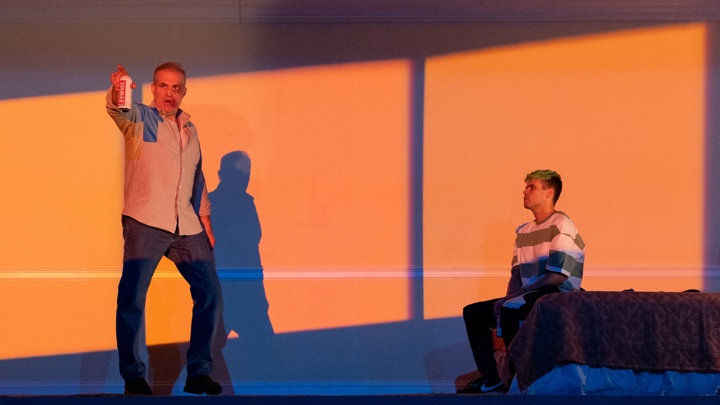 Currently playing at the Abrons Arts Center, a mezzo monodrama followed by a gay two-hander both with music by Emma O’Halloran to libretti by her uncle Mark O’Halloran depict three sad souls sharing their bleak stories.

In Mary, a young woman relates how she came to be in prison serving an 18-year sentence. Despite Tom Creed’s vivid, strobe-enlivened production and Naomi Louisa O’Connell’s fiercely committed portrayal of the title character, Mary felt curiously uninvolving.

During its 30 minutes the protagonist relates the pathetic details of her deprived upbringing in a hellish small Irish town followed by her longed-for escape to Dublin. The freedom offered by the capital city, however, only leads her into a doomed relationship that ends in a shocking act of violence.

While it was impossible not to sympathize with Mary’s tragic circumstances, my long-standing allergy to one-person shows reared its persistent head on Sunday afternoon. Monologues inevitably feel undramatic and thus unsatisfying to me. O’Connell coped valiantly with a high repeated fortissimo vocal line that rarely relaxed, but Mary’s grim litany of her life’s horrors set to a driving, percussive score eventually grew wearying.

However, after intermission, the O’Hallorans added second character, and it made all the difference. Trade adapts Mark’s acclaimed 2011 play about a motel room encounter between a middle-aged married man and the rent boy with whom he’s been involved. Though these unnamed characters too spin stories of their lives, they do so to each other and their confessions, less extreme than Mary’s, prove more sympathetic, thanks to Emma’s moody, more varied and effective score. 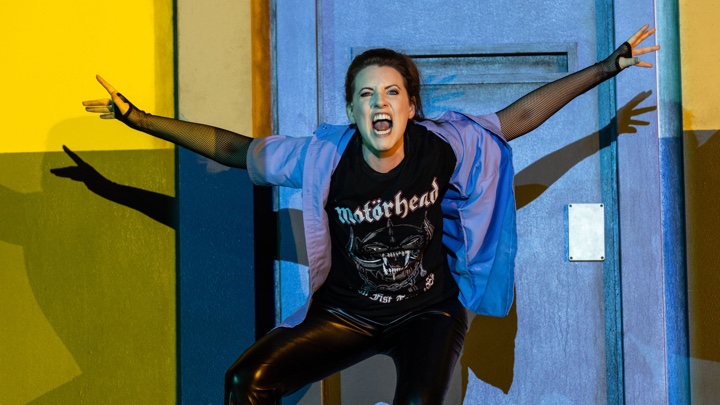 Anyone who has been on Grindr (or similar apps) will have encountered those on the “down low,” i.e.,  men who have sex with men but don’t identify as either gay or bisexual. Though there must be thousands or maybe even millions of these men, often with wives or girlfriends, they’ve only rarely been seen in literature or film, much less opera.

The rent boy, an unfortunate young soul not unlike Mary, may be less convincingly fleshed out, partly due to Kyle Bielfield’s achingly gauche portrayal. Being convincing as a teenager when you’re at least a decade older must be challenging, but Bielfield and his lithe tenor—which sometimes rose to countertenor highs –still ably partnered Kudisch.  There are no duets for them as Emma rejects traditional operatic conventions in her evocative, suspenseful score.

Violence too suffuses the 75-minute opera from its first moments when the older man emerges from the bathroom, his face bruised and bloodied from a fight we will eventually learn about. And we constantly wonder whether the young man will embrace him—or slit his throat?

The pair initially couldn’t be more different yet they have more in common than they could have guessed. As the opera progressed, the story felt increasingly familiar to me. After some memory-delving and intense Googling, I discovered that prior to his niece’s opera Mark O’Halloran had also adapted Trade into a 2019 film entitled Rialto.

I’d watched it on TUBI (a valuable free streaming service where it remains available) during the COVID lockdown. Mark’s bio in the Prototype program curiously omits any mention of Rialto. Revisiting it after the opera, I found myself preferring the opera’s stylized focus on the wounded pair to the ultra-realistic arc of the film. The opera’s unexpectedly moving ending also trumps Rialto’s.

Happily, the Prototype bio of director Creed does include the news that Mark’s Conversations after Sex, winner of the Irish Times’s Theatre Award for best new play of 2022, will have its US premiere at the Irish Arts Center next month.

The Prototype Festival has returned to live performances for the first time since 2020, and once again it has introduced me to an arresting new opera I immediately wanted to revisit. A similar revelation occurred at my first Prototype experience in 2019 with Ellen Reid and Roxie Perkins’s inscrutable Prism, a fascinating work which soon after won the Pulitzer Prize. It’s been recorded and is available to anyone who missed it.