A jewel, despite the setting

The first time I heard of Ermonela Jaho it was as the ultimate understudy.  In the aughts it seemed that every time Angela Gheorghiu or Anna Netrebko or whoever canceled, Jaho was standing by. 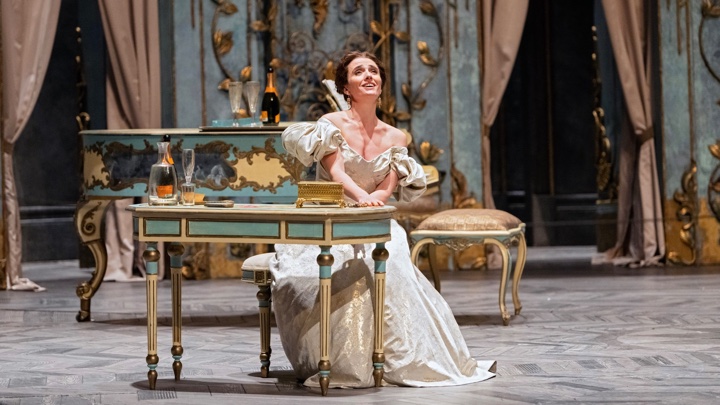 Somehow, the Albanian soprano always made an impression and her Met debut on March 15, 2008, was also as an understudy jumping in for an indisposed Ruth Ann Swenson in La Traviata alongside Jonas Kaufmann and Dwayne Croft with Marco Armiliato holding the baton.

The aughts turned into the teens and Jaho began to take her place in the front rank of the international opera houses often in her signature role of Violetta Valéry in La Traviata in which she is documented in at least one DVD release.

After a 14 year wait (during which Jaho returned to the Met in 2018 in the title role of Madama Butterfly and as Liù in Turandot last year), Jaho reintroduced her courtesan to New York audiences this past Thursday night in the second cast run of Traviata with Mo. Armiliato back in the pit.  At her side were two singers making their Metropolitan Opera debuts—Spanish tenor Ismael Jordi as Alfredo Germont and the Mongolian dramatic baritone Amartuvshin Enkhbat as Père Germont.

In the intermission of last year’s Turandot HD transmission, the hosts praised Jaho as a “heartfelt” singer—and that is accurate for her singing is full of feeling not only from the heart, but from the soul.  That is despite an instrument that isn’t the biggest, richest or most tonally glamorous in the opera business.

On Thursday night, Jaho seemed to have vocalized her voice high for the florid, exposed Act I and took a while to warm up.  The tone in her initial phrases was hollow, veiled and dry.  But as Jaho maneuvered through Violetta’s skittering evasive coloratura phrases in the “Un dì felice, eterea” duet with Alfredo, she revealed a glittering, easy upper register and tonal spin.

The double aria concluding Act I displayed a refined sense of line with shimmering floated phrases in the cavatina and deft coloratura in “Sempre Libera” with easy high C’s.  However, Jaho elected to conclude the cabaletta conservatively on a lower option avoiding any sopracuti. 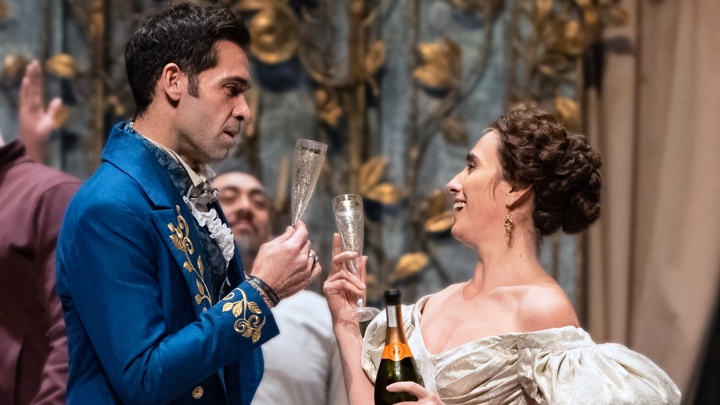 Throughout one had to admire Jaho’s command of vocal and dramatic nuances and refined conception of the role.  Her approach to text was specific and incisive showing dramatic intelligence and deep understanding.  Jaho has dozens of performances of Violetta under her belt and doesn’t miss a thing.

Slender with a long face blessed by pronounced high cheekbones and wide set haunted eyes, Jaho can alternately look delicately pretty or wraithlike depending on the situation.  Jaho is an aristocratic rather than sensual courtesan.  Important for playing Marguerite Gautier/Camille/Violetta, Jaho is (as Fanny Brice sang) a “natural cougher” and she brought the consumptive illness and frailty to the forefront in Act I.  Her inherent elegance and refinement explain why her artistry has won a following in London and Paris.

Jordi is a slim man who looks to be in his early-middle forties with chiseled, rather gaunt features.  His lyric tenor is muscular but firm and he has some interesting musical ideas and phrasing.  The wiry tone is focused and steady but hasn’t much tonal sweetness or bloom.

His top is easy—the Act II cabaletta “O mio rimorso” was capped by a pressured but long sustained high C.  Jordi proved quite a good actor playing Alfredo as an awkward naïf slightly out of his element in Act I which works well.  Again, this is not a glamorous vocal instrument but a “B” voice in the hands of an intelligent singer with experience sure of his effects.

Act II introduced the Mongolian baritone Amartuvshin Enkhbat as Germont.  Immediately the size and quality of his voice was evident—he unfurled his rich tone like a plush carpet in the duet with Violetta.  Volume was not only there but legato and phrasing—the timbre is quite Italianate with convincing diction and stylish phrasing.  He can sing softly and well.  (One of his models I have been told is Renato Bruson.)  My only criticism is that he lost rhythmic musical propulsion in the second verse of “Di Provenza il mar”.

Enkhbat is not a natural actor—he is a stout man with limited facial expression and an impassive stage demeanor.  The voice does all the work.  At the end of his solos and at the final curtain, Enkhbat was rewarded with enthusiastic ovations and bravos.  Audiences crave major voices and seldom get them these days.  Enkhbat is a singer the Met needs to keep on the roster and make plans around. 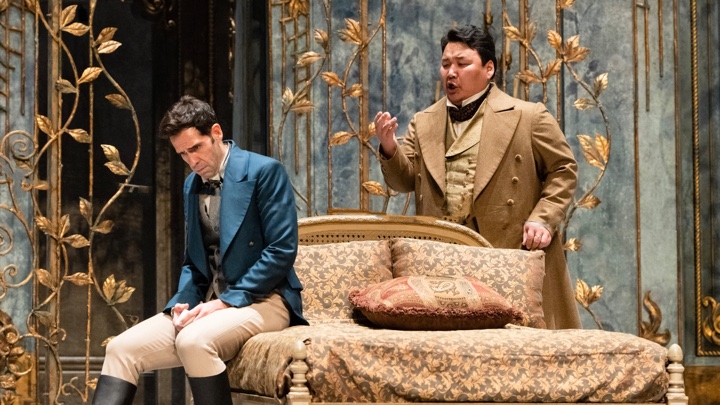 Jaho’s tone gained body and sheen in the more central tessitura of Act II and she deftly navigated Violetta’s evolving moods in the Act II colloquy with Germont.  This Violetta was also capable of angry defiance as well as melancholy resignation in her confrontation with her lover’s father.   Her fluency in verbal and vocal nuance became only more evident.

Jaho’s command of sustained floated mezza voce singing climaxed in a ravishing “Alfredo, di questo core” in the final ensemble of the Act II, Scene 2 gambling scene.  Aided by the masterful Armiliato, the contrasting vocal lines were sculpted into an overwhelming mass ensemble.

Some commenters on the opening night stream suggested a resemblance between Jaho and the legendary verista Magda Olivero.   Jaho has a similar gift of taking a not conventionally glamorous voice and magically turn its idiosyncrasies into musical and dramatic gold.

Act II, Scene 2 also introduced American Ballet Theater principal James Whiteside in his company debut as the shirtless lead male dancer in the little toreador number at the beginning of the party scene.  Despite inane choreography by Lorin Lotarro (including goth/zombie white facial and body makeup), the charismatic Whiteside was commanding and dominated the stage with space devouring leaps and even a cartwheel.

The final act was a triumph for Jaho.  After a trenchant reading of the letter (“Teneste la promessa”), I wasn’t initially impressed by her rendition of “Addio del passato” in which the first verse seemed too fast-paced and matter of fact.

However, the Met includes both verses and Jaho’s intelligent plan revealed itself.  She upped the vocal and dramatic stakes in the death-obsessed second verse building to a shattering climax with an endless piano high note, her body crumpled on the floor as the audience erupted in applause.  In her hands, the second verse didn’t seem redundant and overlong but essential and cathartic.

The Act III death scene with three such sensitive, vocally detailed artists brought a tear to many in the audience including many who were veterans of dozens of Traviata performances and thought themselves jaded and immune.

The supporting cast was solid, especially Deborah Nansteel the rich-voiced Annina and John Hancock as Baron Douphol.  Bass Christopher Job, a party animal Marquis D’Obigny, is always pleasing to me for reasons not entirely musical.

Marco Armiliato is often dismissed as a routinier, but his deft stylish handling of Traviata, like his masterful idiomatic conducting of Giordano’s Fedora a few nights earlier, show him to be a masterful interpreter of Italian opera.  Nothing was handled carelessly or without dramatic insight.  The orchestra played very well.

Much has been written (including by this critic) about the witless, vulgar Michael Mayer production.  I have little interest or energy to repeat myself on the subject.  Jaho knew what she wanted to say as Violetta and put it over, relegating the tacky gold ormolu scenery and silly extraneous tableaux to background detritus while she kept the heroine’s journey front and center.  Her colleagues were on the same page and Verdi (and Dumas) triumphed.  Jaho proved a real jewel despite a setting unworthy of her quality.

Back to the future

We’ll always have Paris (or maybe not)