Why did Ted Sperling and MasterVoices choose to perform an old warhorse like Carmen which has been produced almost continuously over decades just up the street at Lincoln Center? 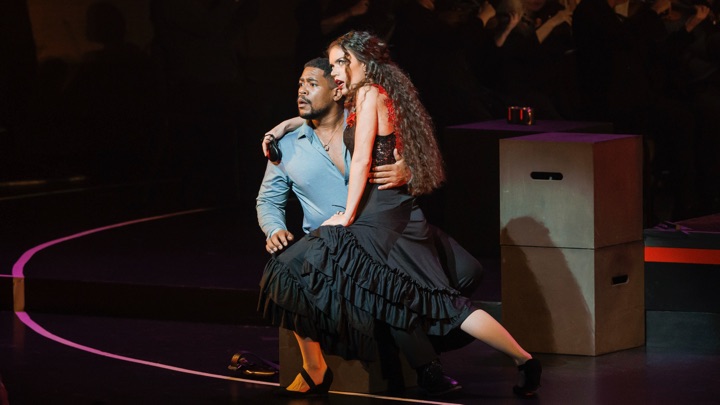 COVID-19 rearranged a lot of lives, squashed some dreams and made us all reassess our situation and choices.  In the arts, many plans fell apart but happily some of these plans have been revived, rescheduled and finally came to fruition.  The MasterVoices opéra-comique Carmen was originally scheduled for April 2020 but fate intervened.

Why did Ted Sperling and MasterVoices choose to perform an old warhorse like Carmen which has been produced almost continuously over decades just up the street at Lincoln Center?  The biggest reason is that the Carmen we see at the Metropolitan Opera is a grand opera version with sung recitatives by Ernest Guiraud that premiered in Vienna after the composer’s tragically early death.

Carmen, as we all know, was originally an opéra-comique with spoken dialogue performed in the language of the audience.  I spoke in my parterre review of Cherubini’s Medée/Medea of the problems of projecting spoken dialogue with international singers in huge auditoriums and the practicability of sung recitatives.  But as is the case with Cherubini’s Medea, it takes longer to sing something than to speak it and the recitatives weigh down the opera musically and stretch it out in performance length.

The opéra-comique Carmen is leaner, meaner and tighter than the grand opera Vienna version providing smoother, more convincing transitions into the big musical set pieces.  Sperling opted to use the Sheldon Harnick English translation to bring the work closer to the audience in the more intimate surroundings of the Rose Theater at Jazz at Lincoln Center.  Judicious edits were made in both score and dialogue.

A very basic but effective staging was provided by Sammi Cannold with Maestro Sperling and the Orchestra of St. Luke’s placed upstage and the singers performing downstage with a small platform and wooden blocks providing the only scenery.  The costumes were generic modern dress. 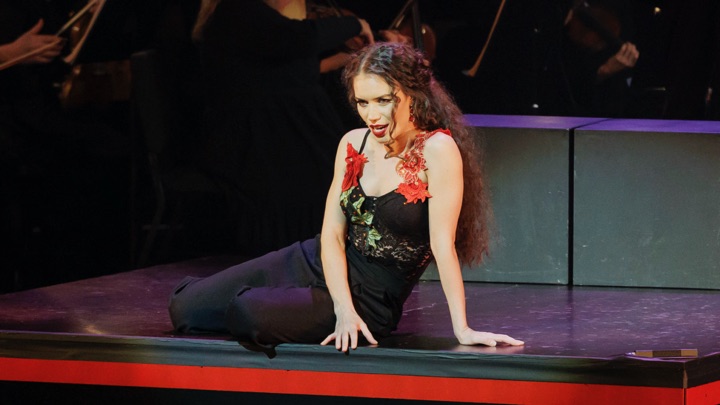 I didn’t see any monitors in the auditorium so likely the singers could not see the conductor.  I heard no problems with ensemble or missed cues.  Sperling’s tempos were sensibly chosen and he kept the proceedings brisk and lively.  The Orchestra of St. Luke’s were, as usual, versatile, professional and focused.

Choreography by Gustavo Zajac filled in some of the staging lacunae with dance and mime performed by Camila Cardona and flamenco dancers Laura Peralta and the striking Isaac Tovar.  Cardona incarnated a masked “Fate” figure in black bodysuit with bull horns (a concept perhaps derived from Alberto Alonso’s Carmen ballet performed by Maya Plisetskaya at the Bolshoi Ballet five decades ago.)

Tovar’s intense stage presence and percussive footwork added immensely to the proceedings.  The MasterVoices chorus was cut down to only about 20 singers until the finale where they inhabited the tiered boxes above the stage.  There was no children’s chorus so the urchins in Act I were cut—and not missed.

The Harnick translation was originally commissioned by the Houston Grand Opera in 1981 and used for the English-language performances of Peter Brook’s La tragédie de Carmen in 1984. Heard for the first time complete in this performance, it’s a very singable and faithful translation that too often sounds mundane and explanatory.

Every character speaks in the same prosaic manner despite differences in sex, culture, background and social standing.  The text is much more evocative en français.  I had very little trouble with textual comprehension and the sung diction was generally clear.

The last time I saw the opéra-comique Carmen it was at Glimmerglass in 2011 in the original French.  A very young Ginger Costa-Jackson sang the title role for the first time graduating from Mercedes in the same opera and many Lolas in Cavalleria Rusticana at the Met.  Since then Costa-Jackson has moved from Met comprimaria to international soloist and has taken her Carmen to Seattle, San Francisco, Kansas City, Michigan but also Tokyo, Liège and next year London at the English National Opera. 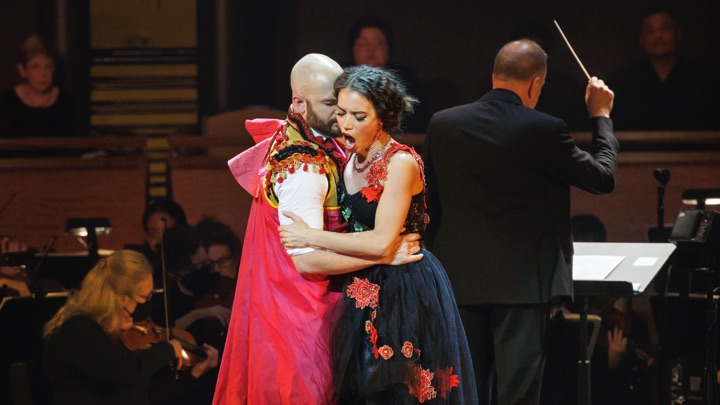 Her Carmen is sexy and lissome but also fiercely independent and guarded with a watchful, poised to attack physicality like a street cat.  Carmen makes her own decisions and will not bow to any man’s will even if it means her death.  Sex is her power used to control men and benefit herself.  What’s love got to do with it?

Fatalism also featured strongly in Costa-Jackson’s interpretation with a very powerful rendition of the Card Song which exploited the strong alto lower register of her voice.  This Carmen is bluntly honest but also egocentric—other people’s needs don’t affect her needs, desires and plans.  It’s all on her terms and no one else’s.  Does this make Carmen a bad person?  Or just ferociously herself and fuck everyone else?  One can see how this law unto herself outsider can drive an insecure macho male like Don José over the edge.

Early in Costa-Jackson’s career, I was bothered by intermittent pitch problems in her mezzo-soprano, particularly around the register breaks.  She has sorted out that problem nicely with seamlessly integrated middle and lower registers and a powerful soprano top that seems to emanate from a different voice.  The timbre is dark but cool and sinewy lacking velvety warmth and roundness.  It works for her conception of the role.

Newcomer Terrence Chin-Loy was a sympathetic, handsome Don José giving the sense that inexperience and insecurity has gotten this soldier in over his head.  His tenor is a juicy full lyric with a soft-grained timbre.  His middle register is plangent and sweet-toned with lovely soft high notes.  In louder forte high register passages, his tone straightens and turned shallow but he has stamina and musicianship.  His tender “Flower Song” was one of the evening’s highlights.

He is not as experienced or natural an actor as Costa-Jackson but projects sincerity and emotional commitment.  It also doesn’t hurt that he has an athletic physique and good stage face.  Chin-Loy debuted last season at the Metropolitan Opera in a small role in Fire Shut Up in My Bones.  If he manages to consolidate and strengthen his upper register and keeps away from too heavy repertoire, he definitely has a good career ahead of him.

Juilliard-trained lyric soprano Mikaela Bennett has illuminated many musical theater concerts locally with her lovely lush voice.  She also has performed Maria in West Side Story at the Lyric Opera of Chicago.  This was her first performance of a full operatic role on local stages. 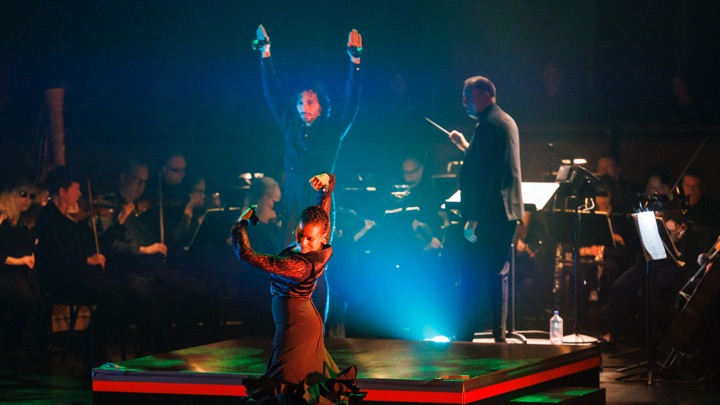 Bennett has the advantage of musical theater training in delivering spoken dialogue naturally and a relaxed stage presence with smooth transitions between speech and song.  Her lush soprano charmed in the nostalgic Act I duet between Micaela and Don José.

However, I felt that Micaela’s big aria in Act III stretched her resources where, despite a sympathetic timbre, her tone stretched thin and sounded pressed in the big high climaxes.  Bennett seemed to use all her breath struggling to fill out the vocal line.  Otherwise, she made an entirely lovely impression but might be wise to stick to classic musical theater legit soprano rep.

New Jersey-born baritone John Brancy was a suave lyric baritone Escamillo working his toreador cape with panache.  As usual, the Toréador Song, though adroit, didn’t bring out his best efforts.  The tessitura lurches from low to high and I find that a high bass or bass-baritone fares better in that music.  The rest of the role sounded rich and smooth and Brancy pointed the text knowingly as Escamillo emerges as a potential rival waiting in the wings.

In the smaller roles, I was impressed by Michael Kelly as both Dancairo and Moralès and William Ferguson as Remendado.  Bass Leo Radosavljevic, burly of voice and frame, made an effective bully of Zuniga that one was glad to see taken down in Act II.  The Frasquita dithered ditzily and the Mercedes sounded like a “lazy soprano. ” Their Act II quintet was nevertheless a delightful interlude.

Chin-Loy and Costa-Jackson delivered a hair-raising final confrontation that brought the evening to a powerful close.  The painful intimacy, raw immediacy and dramatic cohesion of this final scene blew away any reservations one might have had about the translated text, the bare-bones staging and comparison with more sophisticated productions and deluxe voices five blocks north.