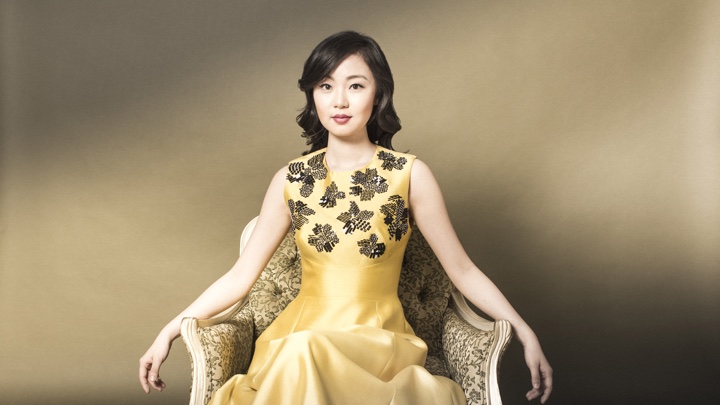 Ying Fang’s lyric soprano is an opalescent wonder, impeccably projected and resonant throughout its range. As a technician, Ms. Fang pairs her inviting instrument with a keen sense for vocal colorations and dynamics, an impressive aptitude and versatility with languages, and an unerring artistry with evolving a musical phrase. To audiences familiar with her work in Mozart’s operas, these gifts manifest in her superb portrayals of Susanna and Ilia—particularly when the soprano spins the recitatives with clarity, spontaneity, and a sense of inevitability.

In her lovingly curated program of art songs, Ms. Fang and the pianist Myra Huang presented pieces hailing from four different national traditions. The concert’s first half was devoted to the German song literature, beginning with Bach’s poignant soprano aria “Zerfliesse, mein Herze” drawn from the latter part of the Johannes Passion.

In this reaction to Christ’s death, Miss Fang’s tonal warmth and elegant phrasing were revelatory, with her rich soprano providing facets of depth and poignancy without the vocal pallor common to early music specialists.

After the Bach aria, Ms. Fang presented a mini-Schubertiad of four great Lieder, a musical high point that played optimally to her musical strengths. Accompanied by Huang’s finely detailed playing, Fang’s singing in “Ganymed” evoked breezy lyricism and excitement, and her word painting probed palpably the subject’s longing for spring, an impossible love, and God. In “Im Abendrot”, the soprano’s intimate and plaintive phrases created a stillness that appeared to make the moment of fleeting beauty described in the poetry live forever.

Best of all was her “Im Frühling”, where she embodied the poetry’s Sehnsucht and captured the variegations of time, emotions, and memory over the arc of six stanzas. With her impeccably centered vocal production and the care she lavishes onto constructing musical phrases, Ms. Fang may well join the company of Irmgard Seefried, Elly Ameling and Barbara Bonney as the composer’s great soprano Lieder interpreters.

The program’s first half ended with a trio of lieder by Richard Strauss. Ms. Fang’s vocalism was most welcome in the composer’s early Op. 10 juvenilia “Die Nacht” and “Allerseelen”, spun with beautiful, sustained legato lines and vocal poise.

The Op. 27 song “Morgen” too was sung with great delicacy, although some of the higher phrases didn’t blossom with the expansive quality found in sopranos with a natural affinity for Strauss’ writing—a nano-quibble really given the excellent musicianship and artistry she demonstrated throughout this exploration of German song.

I’d already praised the soprano’s radiant, expressive performance of Chausson’s Le Colibri, and the delicate atmosphere and emotional contours she presents in Debussy’s Nuit d’Etoiles is no less commendable. In her construction of these beautiful French melodies, Huang proved to be a most imaginative and attentive colorist in matching her soprano’s narrations.

For her American pieces, Ms. Fang chose the delightful, though rarely performed Six Elizabethan Songs by the American composer Dominick Argento. This song cycle, inspired by text from Elizabethan playwrights like Thomas Nashe, Ben Jonson, and Shakespeare, allowed the soprano to revel in the composer’s brilliant, leaping musical lines while rendering quirky phrases like “While greasy Joan doth keel the pot” with astonishing clarity and elan.

The recital proper ended with Ms. Fang inviting the audience to discover music from her homeland, showcasing five Romantic pieces written by 20th century Chinese composers. The first two works are ballads by Yuanren Zhang (“Listening to Rain”) and Rui Zhang (“Happiness of the Snowflake”) presented an interesting glimpse into composers who embraced a Western late Romantic idiom.

This stands in stark contrast to the latter pieces by Zaiyi Lu(“Bridge”), Yi Zhou (“Phoenix Hairpin”), and Qing Liu (“Song of the Yue People”), the middle of which observes a traditional poetic style, the others conjuring the stylings of mellifluous Peking opera.

Ms. Fang’s gift for evocation returns to mind with her rendering of Zaiyu Lu’s Bridge (“Even if I left my home for a thousand years, I would still love my water town”), vividly conjuring this waterside scene with music and words as only an artist of her caliber can.