The film of The Hours failed to effectively weave together the novel’s trio of threads of interiority about suicide and secondarily literary creation. I wondered if an opera would stand a better chance at achieving that?  Based on Tuesday’s diva-encrusted stage premiere of Kevin Puts and Greg Pierce’s The Hours, its creators didn’t pull it off either. 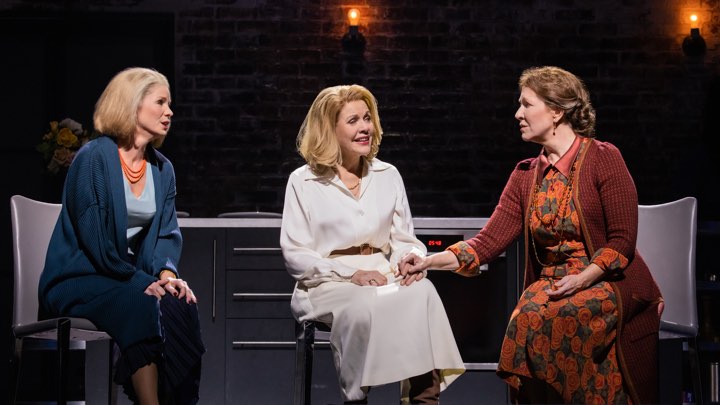 I rarely glance at my watch during an opera, but last night at the Met I did—several times—as The Hours seemed to be going on for hours and hours and…

A while back when I first heard that the Met had commissioned an opera based on The Hours, I was surprised. In the early 1990s I began bearing about Michael Cunningham, but I hadn’t read anything of his until I picked up Flesh and Blood, I raced through the gay potboiler unimpressed and soon after met him and his partner at a small dinner party.

Soon after, he was being talked about by everyone, thanks to The Hours. I checked the novel out of the library and remember disliking the Virginia Woolf sections but they worked well enough with the other two threads. I never understood though what all the fuss (Pulitzer Prize, PEN/Faulkner Award) was about.

My Meryl Streep allergy persuaded me to skip the 2002 Stephen Daldry film although I love Julianne Moore and respect Nicole Kidman. I finally watched it on DVD 10 days ago, and my confusion about The Hours becoming an opera increased, especially as it is explicitly based on both the novel and the film. 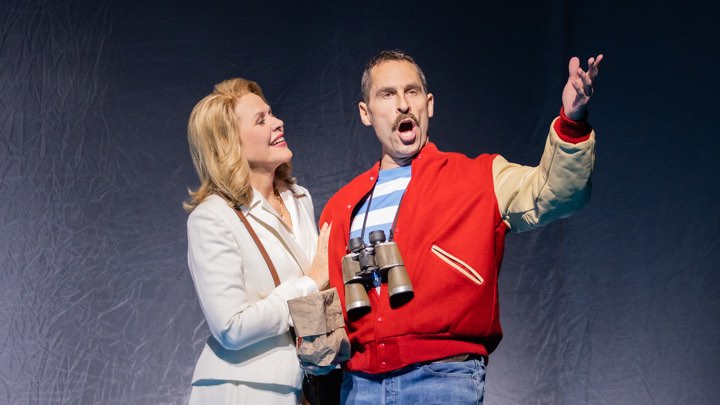 I recalled that the book worked rather well as it featured a compelling thematic link between its three threads: Virginia Woolf struggles with the composition of her novel Mrs. Dalloway as intimations of her later suicide invade her world; Laura Brown reads Mrs. Dalloway while struggling with her dissatisfaction as a housewife and mother and briefly considers suicide: Clarissa Vaughan mirrors Woolf’s Mrs. (Clarissa) Dalloway by planning a party, one to celebrate her friend Richard’s literary prize though he, ill with AIDS, kills himself before the party.

The film failed to effectively weave together the novel’s trio of threads of interiority about suicide and secondarily literary creation. I wondered if an opera would stand a better chance at achieving that?  Based on Tuesday’s breathlessly awaited, star-diva-encrusted stage premiere of Kevin Puts and Greg Pierce’s The Hours, its creators didn’t pull it off either.

During its over three-hour running time, I often thought that The Hours might have worked much better as a smaller one that focused more intently on the three women and how their stories intersected. The Met’s commission clearly pushed Puts and Pierce to create an opera with 20 singing roles and a large anonymous chorus. 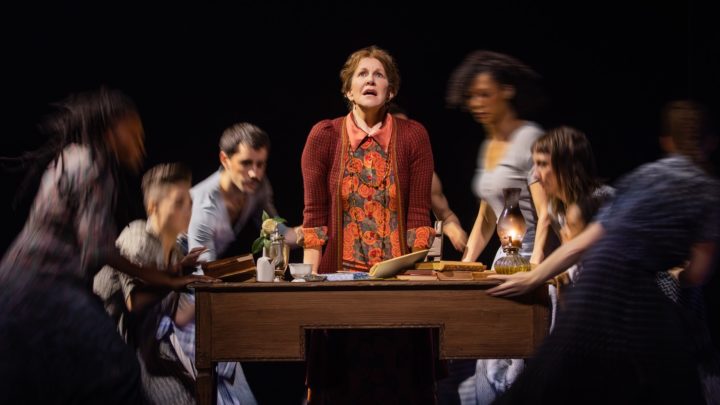 In expanding an intimate book into something BIG AND IMPORTANT, their work ended up feeling both dishonest (for example, its egregiously sentimental let’s-all-hold-hands final trio which admittedly was quite beautiful) and bloated.

The biggest problem with both the film and the opera is Clarissa, their very dull protagonist. Though both Kelli O’Hara and Joyce DiDonato are superstars, the Met’s The Hours felt very much like Renée Fleming’s opera and Clarissa its most important focus. Unfortunately, her character’s journey, embodied by the returning Fleming at her blankest/blandest, proved utterly uninvolving. Clarissa’s all-consuming codependent relationship with Richard appears to be based on a very brief summer affair more than 30 years earlier.

Why a gay woman (shown living with her partner, played by Denyce Graves) has remained obsessed with a gay man (whose ex-lover Louis appears briefly, winningly incarnated by William Burden) is never made clear. One advance over the film devised by Pierce though was to create a flashback to that magic summer giving Fleming, Burden and Kyle Ketelsen as the dying poet an ecstatic trio of reminiscence. 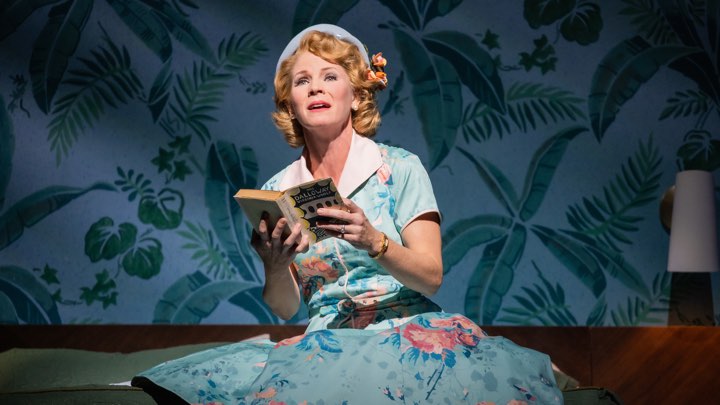 In the second act, Puts’s lovely duets and trios did much to transform the evening. The long first act contains scads of plodding exposition that occasioned most of my watch-consulting. While Puts doesn’t do much to evoke Woolf’s 1920s or Clarissa’s late 1990s, he goes full 1950s Hollywood with Laura’s entrance, a welcome change of pace from Clarissa and Virginia’s dreary monologues which were largely incomprehensible due to Fleming and DiDonato’s cloudy diction.

O’Hara, despite her role’s high tessitura, proved a miracle of verbal clarity which did a lot to make her Laura the most moving of the three central characters.

DiDonato’s Virginia emerged as a bundle of frustrating contractions. She sought to convey Woolf’s mental illness by odd looks and jerky physical moment, yet she alone injected a bit of humor into the generally grim proceedings. Given that the leading roles were expressly written for the three divas, it was surprising that the mezzo so often sounded strained with many high notes veering very sharp. That said, DiDonato exceled in her duets with O’Hara, particularly in the ravishing sequence with female chorus that opens the second act.

On the other hand, nearly-64-years-old-but-still-in-pretty-good-voice Fleming, once she warmed up, shone in writing that sounded exactly what you’d expect for music written for nearly-64-years-old-but-still-in-pretty-good-voice Fleming. Not that it wasn’t sometimes challenging as there were moments that clearly pushed her to her limits including that “summer memories” trio.

Given the opera’s extravagantly explicit prima donna provenance, anyone else in the large cast was hard-pressed to make much of a mark, particularly was their roles are so insubstantial. Brandon Cedel’s handsome, hearty husband to O’Hara stood out, but the usually forthright Sean Panikkar sounded distressingly curdled.

That John Holiday made any impression at all in his glancing roles as Man Under the Bridge and Hotel Clerk was a testament to his glowing countertenor. Kathleen Kim returned, shrill as ever as Barbara the flirty florist and Mrs. Latch. A lushly expressive Sylvia D’Eramo made much of the underwritten role of Kitty, but her brief reappearance as Vanessa Bell went for nothing.

The marvelous Ketelsen has been cruelly underused by the Met. While it was good to see him again, Richard’s two brief appearances (with the bass-baritone looking far too healthy) gave him little to work with and the scene leading to his suicide was so poorly directed that both he and Fleming made a regrettably muted impact.

Phelim McDermott may have had his hands full just keeping three cluttered stories on track, however, the revelation that Laura is the dead Richard’s mother was handled especially poorly. The banal production design appeared off-puttingly cheap, despite its likely hefty price tag. Tom Pye’s five or six slight rooms occupied just the bottom third of the stage picture, while the rest consisted of flowing white sheers apparently from Target. Choreography by Annie-B Parson in her Met debut stood out mostly as completely unnecessary, just another stab at filling up the stage.

And what of Yannick Nézét-Seguin, just now making his first appearance at the Met a full two months into the season? He successfully kept his large and varied forces together and didn’t drown out his stellar trio of ladies. Otherwise, he didn’t put much of a personal stamp on the score, though he clearly reveled in the lush ensembles that occasionally dot the attenuated score.

It happens rarely these days, but the Met was filled to capacity last night with a buzzing, snazzy crowd that greeted the new work with both rapt attention and rousing ovations. A very similar audience came for and cheered Nico Muhly’s Marnie, which fizzled and sank. I did wonder how a less psyched-up, publicity-blitzed audience—especially one that hasn’t done a lot of homework beforehand—will welcome these long, unsatisfying Hours as they tick by through mid-December and on an HD transmission on December 10.