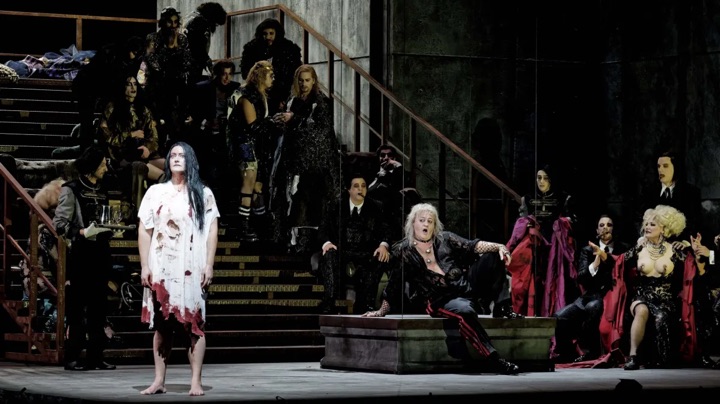 Crucially, both of these productions were buoyed by inimitable divas, bringing unique characterizations and chic vocal stylings to these demanding roles.

Meanwhile, Véronique Gens, a seasoned Gluck interpreter, gave an electrifying performance of one of the composer’s most complex heroines.

I am consistently floored by the versatility of Elza van den Heever’s career. Over the past few years, I’ve seen or heard her sing Mozart, Berg, Handel, Beethoven, Wagner, and now Strauss. And all were consistently high-quality performances – marked by a vocal sound that can be simultaneously smooth and searing and an unwavering musicality.

Her Salome seemed a tad more reserved than her Mozart or Handel roles: I got the distinct sense that she was pacing herself so as not to tire out by the final scene. Indeed, the voice that had sounded so large in Rodelinda and Clemenza di Tito sounded positively minuscule against the enormous Straussian orchestra.

But van den Heever’s vocal caution paid off: she sounded remarkably fresh-voiced throughout the performance, approaching each phrase with warmth and vitality. Wilde’s Salome is supposed to be a teenager and van den Heever actually managed to capture the pep, the spunk, and the volatility of an adolescent coming to terms with their violently blossoming sexuality.

Supporting van den Heever’s particularly memorable performance were two rather outstanding tenors. Tansel Akzeybek’s Narraboth was an unexpected scene-stealer by dint of the clarion beauty of his voice and the conviction of his portrayal.

Meanwhile, John Daszak’s Herod eschewed the sneering vocal acridity that usually goes along with this Charaktertenor role, opting instead for a smoother, sweeter, more charming (and all the more dangerous) take on the Biblical king.

He made a wonderful counterpart to Karita Mattila’s campy Herodias, who strutted around the stage, full bosom on display, delivering each line with a raspy snarl.

Iain Paterson made a sturdy John the Baptist – and he certainly had potent chemistry with van den Heever’s Salome – but I often felt that he got a little lost in the mise-en-scène: his voice lacked the power or the luster to make a memorable impact during his offstage singing.

Lydia Steier’s production has caused something of a minor scandal in France. And for good reason. It is objectively disgusting. 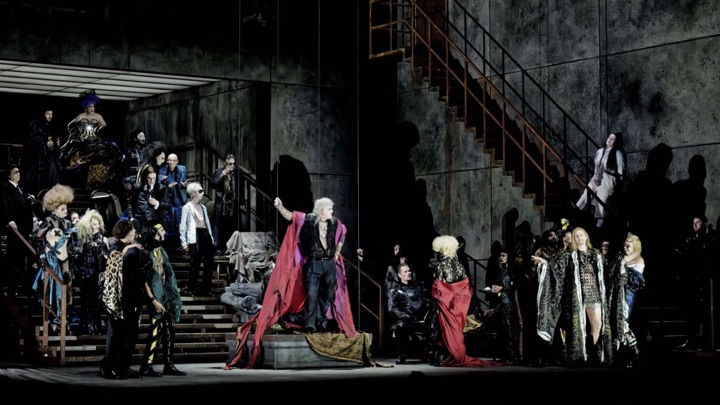 To recount its features would be like telling a particularly humorless rendition of “The Aristocrats”: throughout the first scene, half naked men and women are brought up to a banquet table by guards armed with machine guns, where they are raped and murdered by Herod and his guests, before their bodies are turned into fertilizer;.

I naturally found the staging to be rather tasteless. However, when I had finished clutching my pearls, I ended up rather enjoying the production. I appreciated the intentionality of the director’s vision and the precision of its execution.

There was absolutely nothing half-arsed about this production. It made three unequivocal points and it made them forcefully: 1) that the world that Salome lives in is a violent hellscape; 2) that Salome subjects herself to this violence, sacrificing every ounce of her human dignity in order to get the head of John the Baptist; 3) that Salome is driven insane by the violence she endures, unable to fully enjoy the fruit of her efforts (indeed, in Steier’s production, the head of John the Baptist is taken from the semi-catatonic Salome before the final scene, and she is forced to imagine a tryst between her and the prophet as she writhes helplessly on the ground).

I wish more opera directors took a leaf out of Steier’s book and actually have the guts to actually say something bold about the work that they are directing – even if the final product is somewhat unsavory.

It helps that Steier’s production is full of eye-catching dramatic details that lend to the coherence and veracity of her theatrical vision (for example, Herodias is having an affair with one of the palace guards and steals Herod’s ring to give it to him, explaining why Herod sings the line “Wer hat meinen Ring genommen?”). It is also rather stunning to look at: the set and costumes (by Momme Hinrichs and Andy Besuch) have a sleek, cinematic feel to them to match the production’s Tarantino-levels of blood and gore. 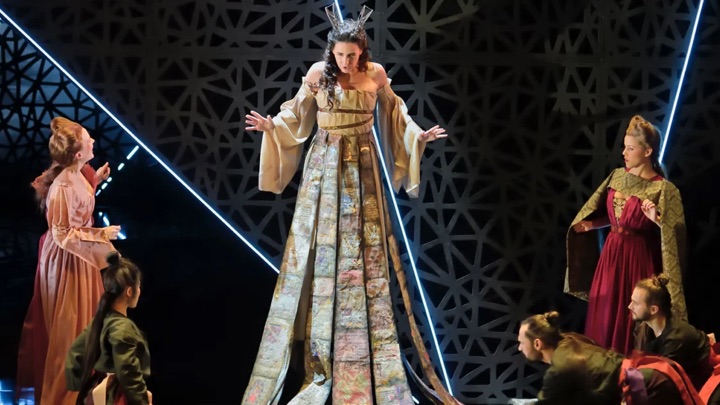 The violence of Steier’s production was excellently matched by Simone Young’s conducting, which was appropriately terse and brutish without sacrificing the latent romanticism of Strauss’s score.

If van den Heever’s Salome was especially volatile, Véronique Gens’s Armide was rather cool and dignified. Quinault’s libretto is all but written from the perspective of the vengeful sorceress and is ripe for a sympathetic portrayal.

Gens delivered just that on opening night: an Armide struggling in the murky moral landscape of a brutal war – a victim of her own compassion, desperate to find emotional equilibrium in a time of ferocious conflict.

Vocally, Gens was in excellent form, exhibiting a bright, even, rounded tone throughout her range. She very neatly balanced the clarity and cleanliness of a baroque specialist with the kind of heavy, dramatic vocalization that Gluck demands.

I feel like there is an art to singing Gluck: as a reformist, he so often defies the conventions of “aria” and “recitative” in favor of more nebulous “monologue” forms, and I often feel that many singers miscalculate the amount of vocal weight to lend to these various interflowing sections.

However, Gens never gave too much or too little. This was particularly evident in her rendition of Armide’s famous monologue, “Enfin il est en ma puissance,” in which she deftly navigated Gluck’s mercurial shifts between arioso and outright recitativo styles while maintaining a laser-sharp dramatic focus.

The role of Renaud was taken by Dr Ian Bostridge CBE – a singer not usually known for his French baroque repertoire. Indeed, Bostridge seemed like an unusual choice for this role and his voice sounded a tad heavier and throatier than your average haute-contre.

Bostridge’s rather robust take on Renaud was occasionally problematic: his Act II arias had a shouty quality to them that felt a little ham alongside Gluck’s militaristic scoring, and he often overpowered Gens in his Act V duets with Gens.

However, on the whole, I rather liked the force and intensity of Bostridge’s portrayal, which felt very much in keeping with the unyielding heroism of Renaud’s character. With a slightly gentler vocal styling, these Gluck haute-contre roles could make a welcome addition to Bostridge’s repertoire.

My favorite performance of the evening came from Anaïk Morel, playing the role of the demon Hate. Her hollering, cackling interpretation was backed up by a velveteen voice and an arresting stage presence. The sweet-voiced Edwin Crossley-Mercer, in the role of Hidraot, was another standout, as much for his dulcet upper register as his elegant phrasing.

At the baton was Christophe Rousset, another Gluck veteran, who led the period orchestra Les talens lyriques through a superb rendition of the composer’s score.

Rousset lent into the grit and the edge of the eighteenth-century orchestral sound: every forte was harsh and crunch; every piano was silky and whispered. He kept the tempi swift and punchy, except when the drama demanded otherwise (for example, he slowed the orchestra right down during the dreamy pastoral sequence in which Renaud falls asleep).

The performance was only let down by Lilo Baur’s tedious production. Baur (who is probably best known to English audiences as the Austrian pharmacist in the second Bridget Jones film) offered an endless carousel of hackneyed, tired, and poorly conceived theatrical tropes that added little to Gluck’s opera.

The general style of the production could be described as a cross between The Decameron, The Wicker Man, The Labyrinth, and The Ring – if all of these were staged under a tree in a Bed, Bath, and Beyond parking lot by an experimental college theater troupe.

One of these theatrical gimmicks might have worked as a set piece, but piled on top of each other, and in combination with the random hodgepodge of costumery, it just felt amateurish – as if Baur still hasn’t learnt to “kill her darlings.”

It was all too busy. And for what? None of this theatrical glut contributed anything to our understanding of the story. Not the Wicker Man suit, nor the hideous dancing scarecrow people. Somehow, it all felt more gratuitous than Steier’s bloodstained Salome.

Invariably, the production merely distracted from the musical excellence of the performance. During Armide’s monologue, Baur featured three interpretive dancers (wearing bizarre tunics) who mirrored the sorceress’s every move. This kind of clownery may be appropriate for a vaudeville rendition of “Me and My Shadow,” but it just detracted from Gens’s singing in this instance.