On a par with tuberculosis

Come back, Big Clock! We need you more than ever! 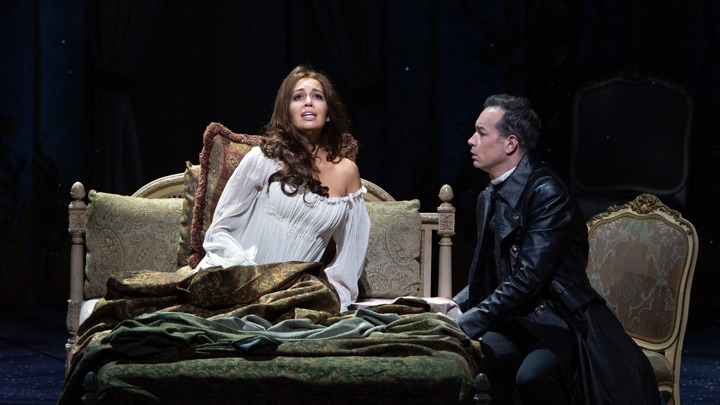 This season marks four years since Willy Decker’s stylish, insightful La traviata was ousted at the Met, and Michael Mayer’s grimly tacky replacement is still turning what should be appointment opera, in this case Nadine Sierra’s grand and gorgeous Violetta, into barely-watchable schlock.

The production’s only successful use of symbolic imagery is also its first: the odd frame around the stage, on which the Met house’s walls, with their embossed midcentury modern pattern, morph into gold filigree vines. It’s a perfect metaphor for the production itself, which seems intent on pulling everything it touches into the worst kind of ersatz-baroque excess.

Which brings me to Sierra, singing her first Violetta at the Met. I know her to be one of those rare singers capable of real acting from the operatic stage; her Lucia last season was vocally impressive and theatrically naturalistic, a funny, sexy, and human portrayal of a character who is not often given such dimensionality. 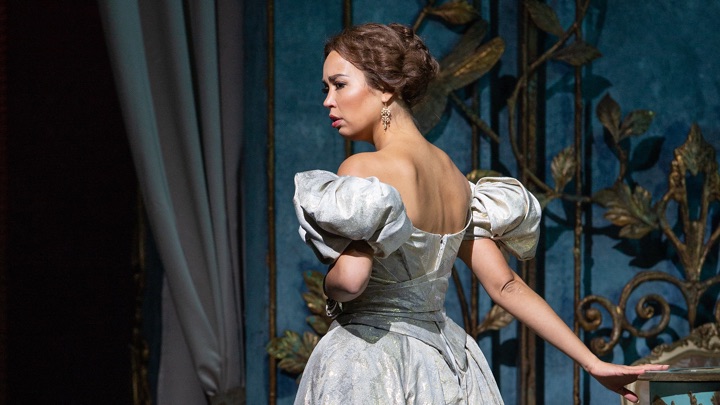 Here, Sierra is vocally beyond impressive. On Tuesday, “Sempre libera” alone showed a touch of the effort required to sing this material; whether due to opening night excitement or the need to marshal resources for the E-flat, Sierra’s breath got away from her a bit. Otherwise, she was totally in control, her voice at turns voracious, with an attack like a mountain cat, warm, with a come-hither quality, and lovely, with a decadent, unfurling richness.

Even among these musical delights, however, I missed the relaxed, instinctive character of her Lucia, which here gave way to an all too familiar repertoire of melodramatic stage gestures: she swished her skirts around, she tossed her head, she flung out her arms, she sank to her knees. It’s a little disappointing to see such a vocally expansive Violetta strike the same gaudy old diva postures, but it’s hardly surprising.

Nuance, restraint, edge, interpretation—these elements are anathema to Mayer’s production. The evening’s only genuine surprise was when Violetta hurled her champagne flute and it audibly smashed; the airbrushed, plastic filigree of this world wouldn’t seem to allow anything that could rupture so violently. It certainly wouldn’t allow for any acting that goes beyond a series of poses. Meryl Streep couldn’t bring nuance to Violetta under these conditions. 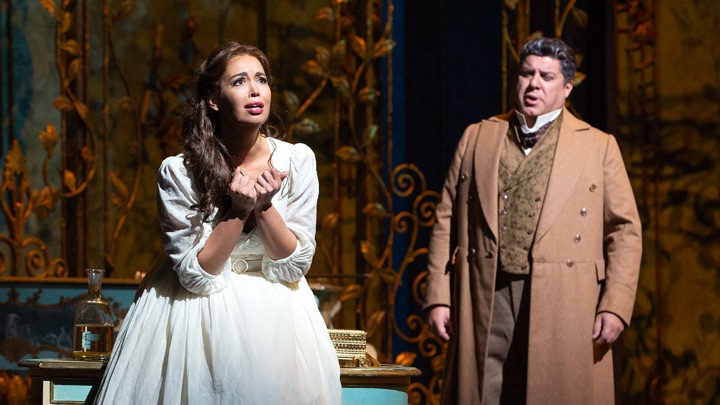 Sierra’s larger-than-life diva mode, while no true detriment to her sound, did extend to a kind of vocal tackiness that was in fact endemic among the cast. For example, no long note sung by either Sierra or Stephen Costello as Alfredo went by without an extended sustain, milked for maximum impact.

Conductor Daniele Callegari’s largely speedy tempos were at times at odds with these singers’ desires to luxuriate, although there were still, somehow, moments of disconnect in which singers rushed ahead of him. Still, a little musical tackiness is at least a pleasurable kind of tacky.

It is impossible to overstate how entirely without visual pleasure this production is.  The set, which remains static throughout but for some seasonally-themed (and painfully symbolically obvious) embellishments, comprises a powder blue kind-of-dome, with yet more gold filigree caked onto the walls, a big hole in the top with a nice painting of the sky in it, and a Pottery Barn Teen bedroom set, with the bed squarely in the middle. 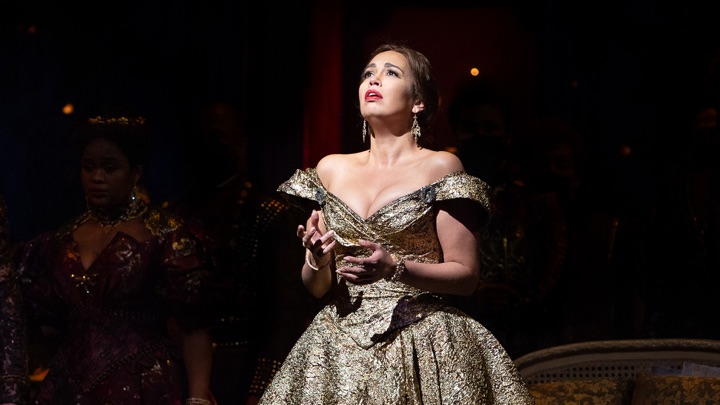 Between the curved wall behind, the gold frame in front, and the bed dead center, the singers are limited in what they can actually do on this stage. They can walk to the bed and sit sadly down on its edge or they can walk laps sadly around the bed, with or without a scene partner following sadly at their heels. Occasionally, for variety’s sake, someone will brace their hands on the bed, and lean sadly forward, bowing their head.

This finite range of motion was particularly noticeable in the act two material between the two Germonts, in which Luca Salsi, stiff and gruff as Giorgio, and Costello, stiff and sullen as Alfredo, sat down, stood up, and encircled the bed more times than I could count.

“Stiff,”  in fact, seemed to be the family trait of the Germonts in this Traviata. Costello’s voice started out covered and belabored; while he warmed up somewhat over the course of the evening to sing the last acts in fine voice indeed, his acting showed no similar trajectory towards ease, and he and Sierra had little in the way of chemistry.

Salsi had a blunt-force quality to his voice that imperfectly suited Germont’s more conflicted cruelty. He, too, never quite seemed to be on the same stage as Sierra when they shared scenes. But, again, in this production there just isn’t the kind of stage that nurtures connection.

With its cyclical, seasonal motif, and staged Prelude that pre-echoes the staging of Violetta’s death, Mayer’s Traviata wants to convey a haunted premonition of inevitable tragedy. Instead, the production is haunted by something else entirely: the spectre of a much better production of La Traviata.

For a little under a decade, Decker’s Traviata proved on the Met stage that an opera production can be simple, stylish and insightful. That, in fact, when staged with clarity and intentionality, a production can combine with its source material to form a piece of art with its own identity and point of view.

By comparison, Mayer’s Traviata is so much worse than a bad and tasteless production—it’s a Traviata that actively makes its source material and its performers worse. And that is a tragedy on a par with tuberculosis.