As ‘The Raven’ flies

Festival O is back, and the sense of joy and expectation was palpable among the audience and Opera Philadelphia staff, who chatted together as we awaited the start of The Raven. 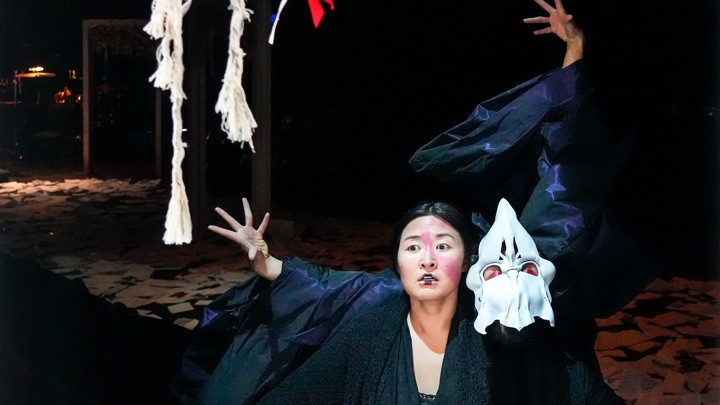 To be clear, the company’s work has been on-going: a streamlined, outdoor Tosca in May of last year was my first return to theater since the pandemic began. But Festival O—a signature event for the company that has been responsible for a new level of national and international awareness—has been on pause till now.

If O22 is reduced in size and scope from previous years, its imagination and audacity remain a hallmark. The Raven is a genre-defying original work, which incorporates a wide spectrum of Philadelphia artists; and it makes unconventional use of a local performance space.

Oh, and yes: tucked in there is a new opera.

First, though, let’s consider the experiential element of The Raven—it is, above all else, an experience.

As you’ve probably guessed, it’s based on Edgar Allan Poe’s famous poem, which we will ultimately hear in its entirety. Before that, an audience of what I would guess is several hundred are gathered in the lobby of Philadelphia’s Miller Theatre, and ultimately dispatched in small groups to various places in the building. Each group is accompanied by a “Lenore.” The program lists eight of them, a highly diverse group of Philadelphia artists. Well, you know the old saying: Lenore the merrier!

If you know your Poe, you have probably already identified the link here. Lenore is a ghostly spectral figure mentioned several times in the poem, but whose actual relationship to text—as is true of so much of the “The Raven”—is mysterious.

The Lenore for my group—who I believe was Pax Ressler, a Philadelphia performer/composer—had a delightfully light, sardonic touch, including describing themselves as a healer, and confessing to idolizing Gwyneth Paltrow and GOOP. Another Lenore may provide an entirely different experience, but ours clearly captivated our group.

(Sidebar: for me, the chance to visit outlying parts of a theater is always its own reward, and nowhere more so than here. The Miller Theater on Broad Street—originally, Philadelphia’s Sam S. Shubert Theatre—was a legendary house for pre-Broadway tryouts, which included among many others several Ethel Merman shows.) 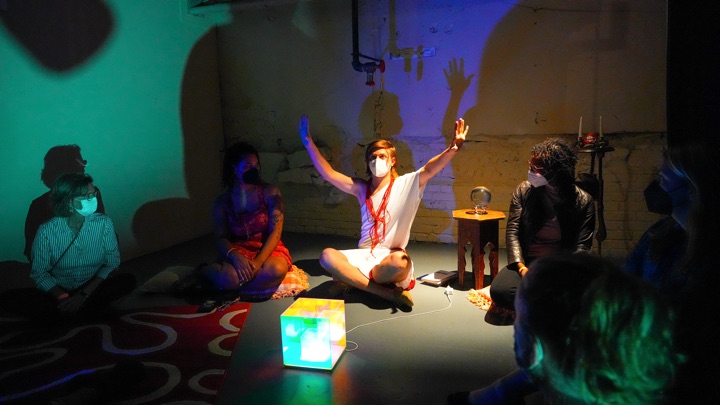 Ressler’s charm proved an interesting contrast to the next installment of The Raven. With the entire audience now seated in an oval configuration on the Miller stage, a small orchestra off to the side begins Toshio Hosokawa’s shortish musical work, which is described as a “Monodrama for mezzo-soprano and 12 players.”

As seen and heard here, it’s that and more. I was quickly captivated by the chamber orchestral score, which has a swirling and sometimes disorienting sense of perpetual motion—often beautiful and disquieting in equal parts—and is superbly performed here by a small ensemble and conductor Eiki Isomura.

Entering into this world is a black-clad figure who is the narrator, and perhaps also the unnamed protagonist—there is clearly a sense of emotional identification with the poem. The vocal music begins in a parlando, récitante delivery—my first reactions compared it to Schoenberg’s Pierrot lunaire—but it becomes more conventionally sung and “operatic.”

There is nothing “conventional,” though, in Kristen Choi’s extraordinary performance, which is fully committed both dramatically and vocally. Her high-quality mezzo is occasionally tested by the forte outbursts on high, but much of her singing is hauntingly lovely (and powerfully harsh when called for), and the whole performance is a considerable achievement.

I was also very taken with Aria Umezawa’s direction of the piece, with memorably quirky design work by Jennifer Hiyama (scenery), Ariel Wang (costumes, hair, and make-up), and Bless Rudisill (lighting). As seen here, Choi—whose is the only voice we hear—is joined in mimed performances by the Lenores, including very memorably one who functions as a kind of raven figure, and perhaps an alter ego of the reciter. (I believe this figure was played by Muyu Ruba, but I’m not certain—the billing aims to support the sense of an equal ensemble.)

For me, the orchestral writing and theatrical performance—which bring a welcome sense of ambiguity and nuance—are more consistently effective than the vocal writing. By around the midpoint of the monodrama, the score started to sound repetitive, with bombast and melodrama replacing inspiration.  Frankly, I doubt that those who dismiss Poe’s celebrated poem as little more than macabre kitsch will have their minds changed. 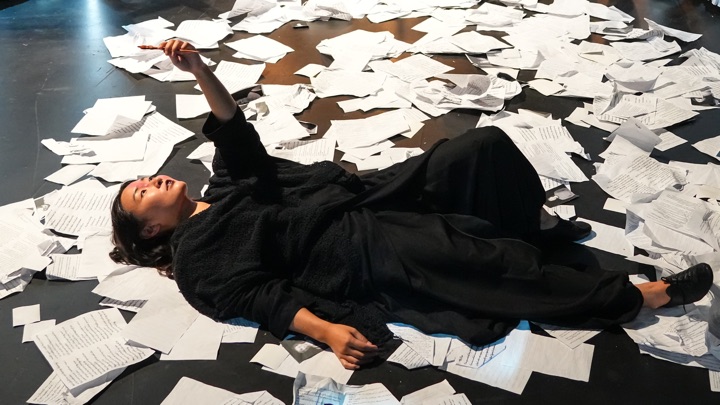 My own mind is divided about whether The Raven will have much of an afterlife beyond the performances here at O22 (all officially sold out, by the way). The musical portion requires first rate forces but is too short to function on its own. The experiential part here is great fun, but dependent on the specifics of this venue and company.

On the other hand, I can imagine forging a quite different “first half,” that would frame and complement Hosokawa’s work in a way that might reveal new things.

We’ll have to see. What matters more now is that it’s a fascinating if flawed piece that marks the occasion with a dollop of real theatrical verve. Festival O—we’ve missed you so, and we’re thrilled you’re here again.