Opera is back, baby, and it’s good to be home! 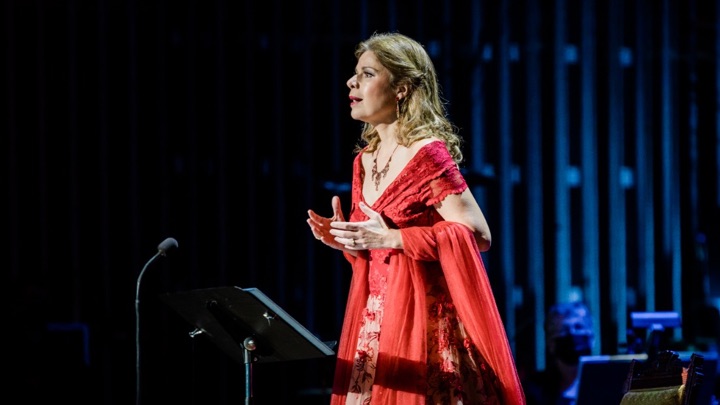 Cameron Kelsall: Before we put our critic hats on, David, can I gush for a moment? Last night, we attended our first live, in-person opera since March 2020, and I felt more overwhelmed than I expected—in the best possible way. I’m grateful, of course, that the pandemic hasn’t been starved for music; I’d argue that symphonies and opera companies have adapted to streaming better than almost any other arts organizations. Opera Philadelphia, which is hosting a streamlined adaptation called The Drama of Tosca at the outdoor Mann Music Center, has been a leader in the United States with their dedicated streaming platform, which we’ve both covered at length on Parterre. But there was something about seeing familiar faces in the audience (even behind masks), collectively breathing the same fresh air, and hearing Opera Philly’s fine orchestra respond to Maestro Corrado Rovaris’ downbeat that reinforced why I love this art form so much.

David Fox: Yes to all of that. Opera Philadelphia has for some years felt to me almost like family—David Devan, the General Director and President of the company, has engendered a tremendous feeling of warmth and closeness with his public (critics included). That has never felt more palpable than it did on Wednesday. The social distancing was accomplished with care and thoughtfulness; I felt completely comfortable throughout. There were inevitable compromises, which we as critics are of course duty bound to discuss… and we’ll get to them. The Mann isn’t a theater designed for opera, and this was of course a concert performance. It was also an adaptation. But sitting in the Fairmount Park among other opera lovers felt simultaneously surreal, joyful, and almost miraculous.

CK: That said, we can’t ignore the fact that this is not Puccini’s Tosca, and the dramaturgical hybrid created by Francesco Micheli and Erika Natali doesn’t entirely work. When I spoke briefly with Devan prior to the performance, he mentioned that audience surveys indicated that intermissions were an area of discomfort, which necessitated a 90-minute reworking of the verismo classic. Gone are secondary characters like Spoletta, Angelotti and the Sacristan; in their place is Charlotte Blake Alston, a well-known Philadelphia performer, who assumes a narratorial role called “The Actress” in the script. Although the musical values of the event were generally top-flight, this new framing device felt superfluous and hamfisted. You would need to know the original material well enough to understand the narration, which was often vague and non-sequitorial—a lot of it focused on mafiosi in Rome and Atlantic City (???), as well as veiled references to the #MeToo movement and contemporary social unrest. But anyone who actually knows Tosca would have no need for this interlocution, because the words and music tell the story well enough themselves.

DF: I’m sorry to put it so bluntly, but Alston (who, by the way, I’ve seen weave magic as a storyteller elsewhere) was an arch and unhelpful presence here. One of the many ways in which Tosca is a masterpiece is the brilliance of its structure—Puccini, Illica and Giacosa set the action in motion from the outset. I can’t think of a work with a greater sense of forward momentum: the extended solo passages (relatively few, of course) are moments of suspended time that both hold us enrapt and make us more anxious to see what happens. Cuts in this fabric are harmful, but as last night’s unfortunate experiment in narration proved, not nearly as harmful as interruptions.

CK: A moment that captured this frustration perfectly was the build to “Vissi d’Arte”—or at least, what should have been. The heated exchange between Tosca (Ana María Martínez, elegant and soulful) and Scarpia (Quinn Kelsey, in a role debut that can only be described as extraordinary) crackled. The familiar rumble of the snare drum sounded. Martínez looked poised to deliver a showstopper. And then the focus shifted to Alston and her narration:

“Be careful if you make a woman cry, for God counts her tears! The woman came out of a man’s rib. Not from his feet to be walked on. Not from his head to be superior, but from his side to be equal. Under the arm to be protected and next to the heart to be loved.”

These words come from the Talmud, an ancient text full of wisdom.

But what do you know about protection and love?

Mario loves Floria, the baron doesn’t love Tosca: he wants to make her his.

For love of Mario, Tosca is willing to submit: to sleep with Scarpia?

It would be like throwing herself into a nest of scorpions or being embraced by a giant spider.So get away, away, far away, as far as possible from that disgusting web called Rome.

DF: Indeed. Initially, I thought there was some wit to removing (temporarily, as it turned out) Tosca’s biggest hit from its familiar context—historically, there have been a number of critics who suggested that “Vissi d’arte” slows down the action unnecessarily. I don’t agree, but this gave us a chance to think about it. But shifting it to the very end of the evening was strangely anti-climactic. Also thematically off-key—although the aria does, as Alston reminded us, tell us that Tosca “lives for art,” I think the greater resonance is her resentment of her god, who has left her stranded in a moment of need.

CK: I also think it does a disservice to Martínez, also making a role debut, and a very fine one at that. Dramaturgically, by turning “Vissi d’Arte” into an eleven-o’clock number, it feeds into one of the worst stereotypes of opera and opera audiences—that all anyone cares about are the hits. This isn’t a Skynyrd concert, and “Vissi d’Arte” isn’t “Free Bird.” Martínez handled the moment admirably, but it felt divorced from the dramatic thrust of the rest of her performance. I’d also say that while Tosca’s music suits her voice extraordinarily well, the aria itself sits awkwardly in a vocal break. That was likely more noticeable given its prominent placement here.

DF: As you’ve said, this was a role debut for Martínez, and in virtually all respects a triumphant one to my ears. The voice is exceptionally even throughout its range, and to me its glory is her caramel-colored upper middle, which is where most of the role lies. She’s also exceptionally musical, very much “on the words,” and (even in a concert context) a vivid theatrical presence. I regretted that the cuts deprived her of some of Tosca’s conversational moments, but in her scene with Scarpia especially, this was probably the finest Tosca singing I’ve heard in more than a decade. That said, the suspension and float that “Vissi d’Arte” calls for isn’t as natural to her. I think Rovaris accommodated that with a fairly speedy reading, but it isn’t quite her sweet-spot. 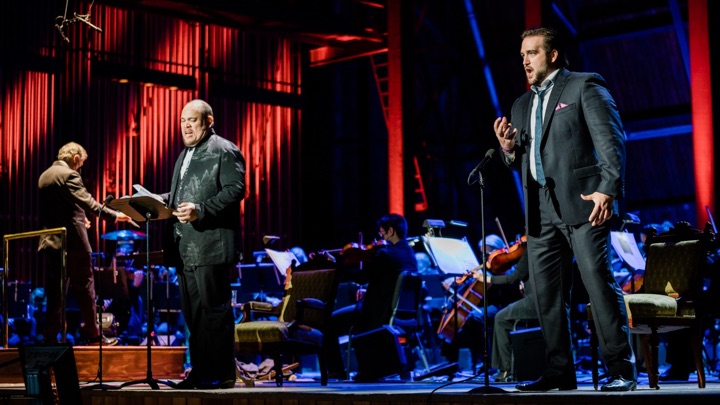 CK: The moment that fully cemented Martínez’s potential as one of the truly great Toscas of our time was her reading of the line “Dio mio perdona. Egli vede ch’io piangio” (God forgives me. He sees my tears.), which she performed with utter conviction and a total lack of histrionics. For all that Alston’s narration seemed intent on reminding us that Tosca is an actress, Martínez showed us Tosca as a flesh-and-blood person.

DF: Here and throughout, I was struck that—while Martínez has temperament to burn—she makes all of her points vocally through Puccini’s musical line. There’s very little veering into Sprechstimme. This is a performance of enormous class. And in that, she’s ideally paired with Kelsey.

CK: After enduring a slew of Bayreuth barkers and Warren wannabes in this role over the past decade, here is the genuine article. For one thing, Kelsey can project effortless a pulsating sense of sex appeal that also feels legitimately dangerous. This is no Scarpia as defanged bureaucrat; you could actually imagine someone being swayed by his energy, which makes the entire Scarpia–Tosca pas de deux all the more unsettling.

DF: From the very first notes, I actually got chills. First of all, it is a truly gorgeous voice, one that just washes over me with its myriad of color. But it’s Kelsey’s laser-beam focus that makes this a Scarpia for the ages. I wanted to take every acting student I know to see him—he makes his points so powerfully and yet with an absolute minimum of gesture. This is great acting!

CK: Really, if Martínez and Kelsey are delivering this level of detailed work in a very minimal concert staging, I can only imagine how effective they will be in a full production. The third principal of the evening is an old hand by comparison—Brian Jagde, who’s sung Cavardossi and the Met and elsewhere, and even named his dog after the character! Unfortunately, I found him to be the musical weak link. His voice is attractive at its core but already showing signs of disrepair. High attacks were blunt, sustained notes bleaty. Like many tenors, he can’t avoid pushing himself uncomfortably into Corelli territory. But Corelli was an exceptionally individual artist, both refined and forceful, and Cavaradossi was his greatest role—one in which he did things that no one can, or should, try to copy.

DF: I generally take umbrage at the notion that “Corelli territory” implies yelling—especially as Cavaradosi, he could be accused of pulling the time around, but there’s a remarkable control of dynamics and real sensitivity. I wish I could find that in Jagde’s work, but to me he mostly resorts to brute force, which is rarely the best option. It’s a wonderful instrument, and I hope he finds a way to deploy it with more nuance. I’m remembering (and probably not quite accurately) a delightful Conrad Osborne review of the Nilsson/Corelli/Fischer Dieskau Tosca in which he says something like a pair of singers here give us two-thirds of a great Tosca. (I’ll leave it to our readers to guess at the unwelcome #3.) But Tosca is more than the solo singers—it needs great conducting, and Rovaris showed a superb sense of Italianate musical phrasing that’s the absolute bedrock of this opera. The orchestra supported that exceptionally well, and there was lovely choral singing from (literally) the rafters above the audience. Kudos to all.

CK: Opera Philadelphia will announce its next season on May 18, and it remains uncertain what that will look like. But based on what we saw last night, I think there’s no doubt we’re in good hands.