No heather on the hill: ‘Lucia’ in LA

LA Opera sent out an email warning that the production “contains depictions of blood, violence, and drug use, as well as strobe lights and a gunshot effect in Act III." 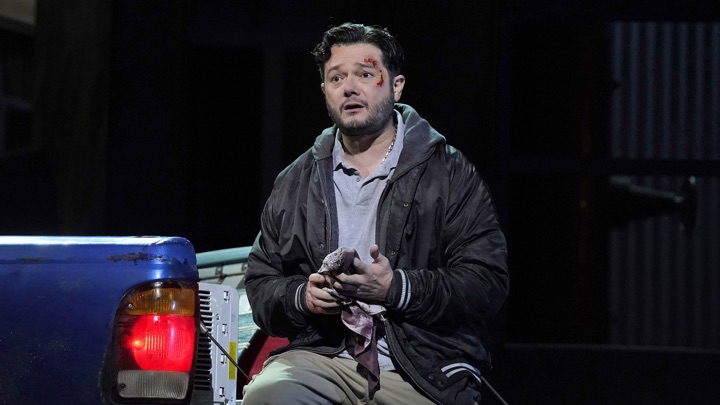 Opening night at LA Opera is always a charming fuss. There’s the big dinner up on the plaza for the big-dollar donors. Pity it’s harder to spot the celebrities now with the mask mandate. I did espy some avant-garde fashion choices however in the form of two Jonathan Van Ness clones and a couple velvet tuxedo jackets (one burgundy and the other midnight blue) which left me wondering where the cocktail piano was?

Yet compared to what happened on stage Saturday night at the Dorothy Chandler Pavilion they were barely a blip on the radar.

We had two very important debuts to look forward to in the form of our new resident conductor Lina Gonzalez-Granados and innovative stage director Simon Stone. The chosen opera was Gaetano Donizetti’s honeymoon horror story Lucia di Lammermoor in a production that premiered last April at the Metropolitan Opera. I(’d like to take a moment to personally thank Peter Gelb for hosting our out-of-town tryout.)

So I purposely recused myself from observing all written reviews and Live in HD broadcasts in the hopes of approaching with an open mind. What I did gather from the set design models I saw and the near-unavoidable shrieks of opera queens was that this was not going to be tartans on the bonny heathered heath.

I had a friend who saw it in New York last spring who called it the, “Lucia Chainsaw Massacre.” Then LA Opera sent out an email warning that the production “contains depictions of blood, violence, and drug use, as well as strobe lights and a gunshot effect in Act III”.

So I was practically giddy with anticipation for what we were going to get.  What we got was “‘merica,” and not the pretty one either. The kind where the men have face tattoos, wear gold chains, and carry a baseball bat. Luckily I didn’t see any red baseball caps but it seemed that kind of crowd. 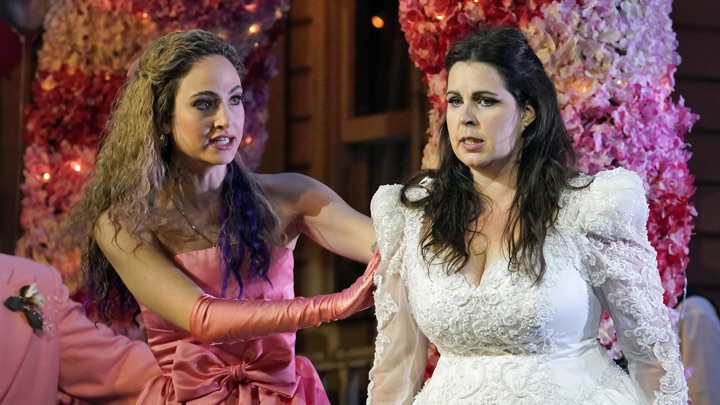 The ingenious set designs of Lizzie Clachan were fragmented, hyper-realistic pieces of a small mid-western city in decay. Signage in the town was presented only in fragments as well so as not to appear to be overt product placement. The fountain where Lucia imagines the ghost of her ancestor became a massive water treatment plant.

Her house was represented in cut-away as were a drive-in movie theater, a liquor store, mini-mart, ATM and motel. A Steadycam crew followed along, mostly early in the evening, and its visuals were projected on a large movie screen that also featured the adapted supertitles to go along with this staging. Late model cars and trucks in various states of disrepair were strewn about as needed.

A turntable (silently…thank you) added to the general disorientation by keeping the  characters and sets and, by relation, the audience in near constant motion.  What made this work was the very clear and careful choreography of everyone’s, and everything’s, movements by Mr. Stone. Although at times I felt it did rob the staging of a certain amount of spontaneity.

However as the story progressed and Lucia’s mental state shattered so did the set in most respects and there it, and the turntable, were exceptionally well utilized to scary theatrical effect.

Musically I’m happy to say I couldn’t have hoped for more, mostly because there wasn’t more to be hoped for!  Spoiled by note-complete recordings (and don’t ask me how many Lucia’s I own) it’s invariably a disappointment when your experience in the theater disassembles the careful construction of the composer’s arias and ensembles by, not so judicial, snipping.

Like you only get one go at the cavatina and cabaletta, or all the strettas (which build the excitement of the climaxes) are missing, or, even worse, entire scenes are excised for time. 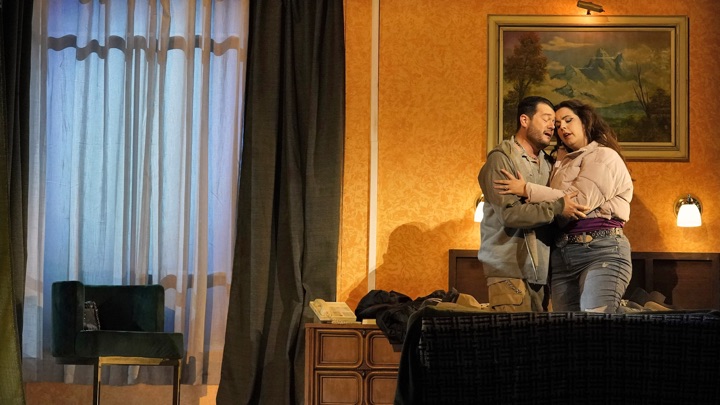 Saturday night we got Lucia. All of it.  Nearly every last note and almost all the strettas. We got the “Wolf’s Crag” scene and the entire finale of Act II after the Sextet. When the glass harmonica started accompanying the Mad Scene from the pit I thought I was the one who was going to go crazy.

Maestro Gonzalez-Granados not only led a fiercely exciting performance but managed to capture the dark sound in Donizetti’s orchestrations necessary to convey the growing sense of foreboding in the story. She never failed to provide sensitive and stylish accompaniment to her able cast, even offering beautiful rubato effects in some of those aforementioned repeats and strettas that highlighted both the singers and the music to their fullest.

The LA Opera Orchestra sounded magnificent all evening. The horns played with a beautifully muted hush at times and the strings were fiery and spirited when necessary. Musically this was an uncommonly assured performance and it never seemed that the many abrupt tempo changes were taking anyone by surprise. I do want to single out harpist JoAnn Turovsky and Friedrich Heinrich Kern on the glass harmonica for their stellar contributions.

Which brings us to our singers. One thing LA Opera has always had in its favor is an excellent young artist’s program that not only provides experience in smaller roles for young voices but isn’t afraid to elevate those singers when the time comes.  As Alisa and Normanno, Madeleine Lyon and Anthony Leon gave well-gauged support as needed.

As the villainous Enrico, Lucia’s evil brother who marries her off to save the family escutcheon (or four-wheel drive sport-utility vehicle as is probably the case here) we had Alexander Birch Elliott. He’s got the snarling baritone sound down to perfection and never tired during his long opening scene (with stretta) which was a pleasure to hear and kept him in near constant motion because of said turntable.

His other great moment was the duet with his sister in the lead up to the wedding that found both of them in excellent form. Only a last bit of physical violence at the conclusion of their duet didn’t come off because of timing but I’m certain that will right itself at later performances. 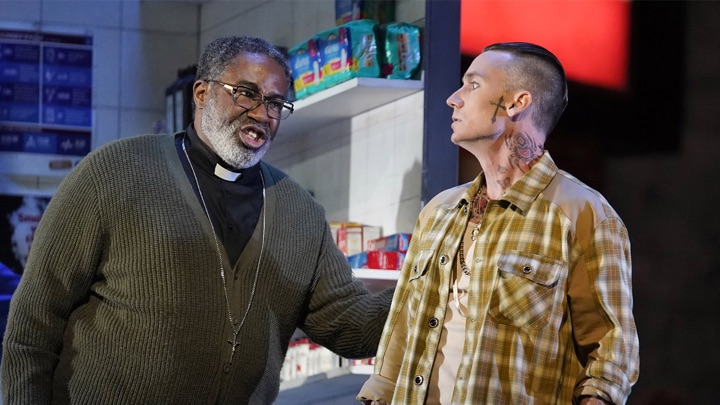 Arturo Chacon-Cruz was Lucia’s secretly betrothed Edgardo and this was by far his finest work at LA Opera. His singing was exciting and highly romantic with particular attention to dynamics in his phrasing that made his duet partners doubly aware. Amanda Woodbury, our Lucia, after a fine start in her opening scena came alive during their duet. Chacon-Cruz was red-hot during the curse at the wedding ceremony and especially moving in his final scene where he met his end with a gun (update).

Ms. Woodbury proved herself a fine Lucia and more than game as a singing actress. I’m  certain as a little girl she dreamed of capping off the Mad Scene from Lucia with a gloriously placed E-flat from the roof of the cab of a pick-up truck looking like Stephen King’s Carrie just back from the prom. M

s. Woodbury has the kind of old-fashioned sound one could best describe as limpid. Once she’s fully warmed up the top of the voice has an exquisite bell-like quality with great technical security above the staff. Although she omitted the stretta in her first cabaletta she ornamented nicely (and at times originally) throughout the rest of the evening with some exciting staccato effects during the Mad Scene. Her tone was always clear and although she may have concentrated more at times on her singing than her acting it’s that kind of role.

In the minus column it pains me to place Eric Owens as Raimondo. I was so excited to hear Mr. Owens live after admiring him for so long but his portrayal was stiff and his vocalism just not up to the level of the rest of the cast.

Another problem was Anthony Ciaramitaro as Lucia’s hapless bridegroom Arturo which may not entirely be his fault. Got up in a Schiaparelli pink suit, he entered carrying the wedding cake and I assumed, in spite of what was going on with the supertitles, that he was the caterer not the affianced soon to be dispatched. In spite of his absolutely magnificent voice his character pulled focus so much during the finale of Act II I would have been happy to do the deed myself. Plus I don’t like what that suit suggests his character.

Which brings us to the costumes of Blanca Anon. I get that we’re portraying a certain slice of Americana here but in most cases the looks on the cast lacked the sharp iconic edge the sets have to help conjure the story and it didn’t seem like they were designed in concert with one another. As well some of them were just downright unflattering to the singers.

I’m a traditionalist let there be no doubt. I was telling a friend the other day how incensed the conductor Tullio Serafin was with producer Franco Zefferelli for daring to splatter a little blood on Joan Sutherland’s nightgown in 1959 at Covent Garden. It was shocking at the time.

So much clear thought has been put into this production by Mr. Stone and his talented team it is an excellent example of how opera can become more engaging as modern theater while still respecting its conventions. Besides, the real traditionalists wouldn’t be happy with anything you put in front of them unless it was the conjured ghost of Dame Joan herself.

Ms. Woodbury sings the next two performances and then the very talented Liv Redpath, also a graduate of our young artists program,  takes over as Lucia for the remaining three.