Gregory Spears’ latest opera Castor and Patience, with a libretto by former US Poet Laureate and Pulitzer Prize-winner Tracy K. Smith, was commissioned by Cincinnati Opera to celebrate its centennial season in 2020. 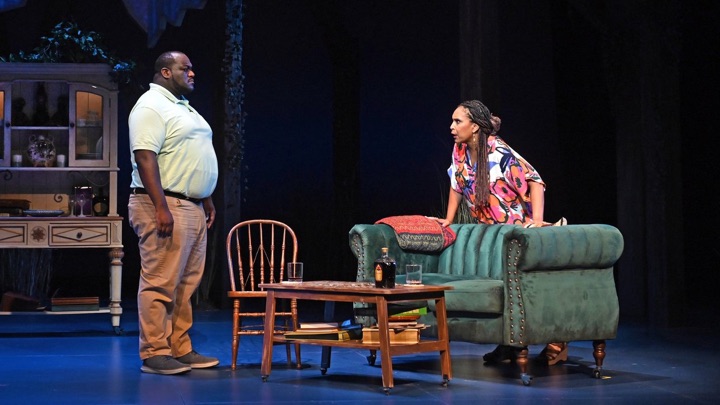 Following a two-year hiatus on indoor performances, Castor and Patience had its the world premiere last week.

Even before George Floyd’s murder pulled back the scab of American racism, The Central Park Five, Blue, Fire Shut Up in My Bones, The Life and Times of Malcom X and Blind Injustice probed untapped depths of Black American history.

Spears and Smith created their own narrative based on extensive interviews they had with residents of the Carolina and Georgia coasts who were victims of systemic attacks on Black property ownership. Spears, a white man, grew up in Virginia and was increasingly aware of efforts to erase these histories; Smith, who grew up in Northern California, says she has “deep roots in Alabama.”

Their story deals with an extended family grappling with questions of land and legacy in the American South. In a jointly authored essay, Spears and Smith asked audience members to consider what or who is home, and whether inheritance is liberating or a burden. These heady questions remain ambiguous in the opera itself.

I found myself less than introspective because Castor and Patience feels like a work still in progress, despite powerful moments, stunning performances, astute staging and an effective production.

I get that this is Smith’s first libretto and, although poets can be good at concision, this text is heavy on prose exposition.  I wanted more of Smith’s poetry to tell those stories. She is one of my favorite poets, a master of luminous and frequently spare imagery that is always evocative. 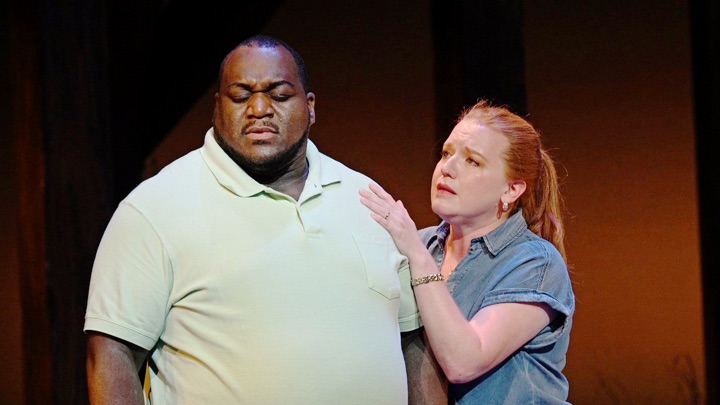 The opera is most powerful when actions are shown and not “narrated.” It’s clear that Spears and Smith take seriously their shared commitments to convey the stories they heard on their travels. But on the musical stage, less is more. Fortunately, there are instances where the characters sing poetic text–and the opera enters a different realm.

The work opens on December 31, 1862—“Watch Night”—as a group of enslaved people await midnight when the Emancipation Proclamation takes effect. Fast forward to 2008, as Castor, his white wife Celeste and their children Ruthie and Judah wait for a ferry to an unnamed island in the South where Castor’s cousin Patience and her adult children West and Willie live on land owned by the family since Reconstruction. Castor and Patience are the sole heirs.

Castor’s family left the island and moved to Buffalo when he was a child, and now he and Celeste are victims of the mortgage crisis. The family reunion is a façade; Castor wants Patience’s permission to sell his share of the property.

Patience is the fiercely proud matriarch, determined to maintain the family’s presence on the island even as preservationists encroach.  When West announces he wants to take a job off the island, she reminds him (and not for the first time) of the family history going back to enslavement. (Family names are rooted in classical history: Castor, Phoebe, Cato, Titus.)

Even if this is necessary exposition, it feels like a docent lecturing the tour groups Patience despises. No wonder West responds, “I know all this forward and back, Ma.”

He does, but not enough people are aware of the daunting barriers Black citizens continue to experience.

The second act is more coherent and effective, beginning with an offstage chorus chanting a hymn as a group of recently freed people in 1870 comment on the forces out to wrest property ownership from them. 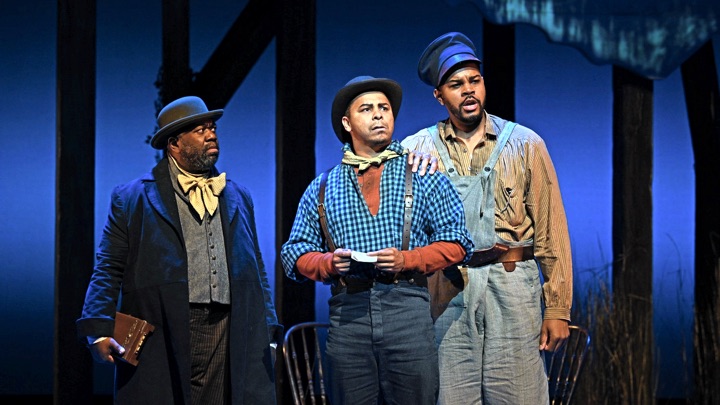 I almost gasped at the scene’s end.

What follows are more lessons in systemic racism: West describing federal confiscation of their land for an airstrip and America’s willful ignorance of lynching and racial injustice.  Castor follows with an account of his family’s encounters with redlining in Buffalo.

There’s occasional relief when Smith allows her wry humor to surface. West asks Judah what he learned about Black property ownership after Emancipation. “Something about acres and mule,” he replies.

Later, Castor’s pain, anguish and anger send him into a delusional tailspin as he stares at the trees. It’s one of the opera’s most powerful moments, thanks to Smith’s poetry and Spears’ truly spooky music.

The reveal of why Castor’s family left the island is a dull roar. There’s no definite conclusion. Castor and his family leave the island, somehow getting back to Buffalo after their car is repossessed. No decision about the property has been reached.

What does come together, in Patience’s powerful final aria, “Think You Know This Man,” are themes of home, legacy and lines heard at the beginning of the opera.

Unlike Spears’ earlier work, Fellow Travelers, Castor and Patience’s score makes no reference to a specific music genre, retaining his post-minimalist style throughout. It works for evoking the languid eeriness of the island and the spirits still inhabiting it. He’s at his most inspired when he supports Smith’s poetry with compelling ariosi. These were the opera’s most powerful moments and, as noted earlier, the final aria is breathtaking.

The performance itself was of the highest order. Kazem Abdullah led the Cincinnati Symphony Orchestra, skillfully navigating the rhythmic complexities to support the performers.

The cast is superb. Reginald Smith, Jr.’s rich baritone evoked Castor’s shame for his predicament and his struggle to acknowledge his fears and responsibilities. His (white) wife Celeste gets a sympathetic portrayal from Jennifer Johnson Cano. Rising soprano Raven McMillon doesn’t have much opportunity to be more than the Baby Girl daughter but Frederick Ballentine’s edgy take on her brother Judah was a highlight.

I haven’t yet spoken to Black friends who were at the premiere, which was enthusiastically received. My judgments are based on my experiences with opera and especially with new works.

But as Florida and Texas enact shameful prohibitions on DEI and Critical Race Theory, the urgency to prevent Castor and Patience’s stories from vanishing is critical. This opera could be even more forceful with judicious revisions. I left wishing for a more poetic libretto and a stronger score to tell this story.  Castor and Patience deserve it.