Before Wednesday I don’t remember gasping when I entered a concert venue. 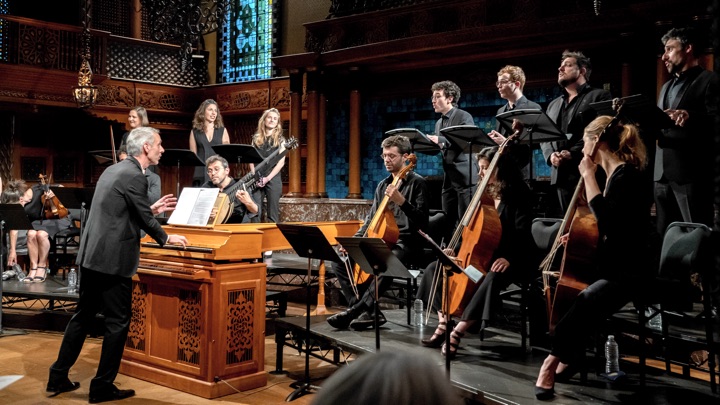 Although I recall being mightily impressed the first—and only—time I went to Vienna’s Musikverein, I was dumbstruck arriving at the Park Avenue Armory’s Restored Veterans Room for Ensemble Correspondances’s often blissful Plaisirs du Louvre.

I was expecting the performance to take place in the Armory’s impressive Board of Officers Room where its marvelous vocal recital series is held. But instead the French Early Music group held court in an even more intimate setting: a breathtaking paneled space with a high coffered ceiling, stained glass windows and a striking cobalt blue fireplace.

Sébastien Daucé, the group’s leader, in his brief informative remarks, mentioned that the music we were hearing was written for precisely such a sumptuous space. Just 60 audience members were treated to a brief tour of music written for members of the court of Louis XIII by the group of seven singers and eight instrumentalists, including Daucé who led from the keyboards.

Over the past half-century 17th century French music has strongly re-emerged from years of relative obscurity. However, most of the performances and recordings have featured pieces composed during the reign of Louis XIV, particularly those by Lully and Charpentier.

Through Ensemble Correspondances’s extensive discography includes many Charpentier discs, Daucé has been particularly involved with the revival of works from an earlier era extending back to the late 16th century.

His most impressive project has been a reconstruction of the legendary Le Ballet Royal de la Nuit, an over-three-hour extravaganza set to music by a variety of composers including Italians Cavalli and Rossi, as well as Frenchmen like Antoine Boësset whose compositions were prominently featured on Wednesday’s EC-Armory program. Several lively instrumental pieces by Louis Constantin from the Ballet Royal were also included.

If the Armory program failed to reach the transporting heights of its pair of concerts in late 2018, it may be because, for me at least, early 17th century secular works by Boësset, Étienne Moulinié and others just aren’t as compelling as those later works by Lully, Charpentier, Campra and Rameau performed by the group on their earlier visit.

The richest noblemen and women of Louis XIII’s court would employ composer, singers and instrumentalists to create and perform music in their homes for all sorts of occasions. The works heard Wednesday sometimes awkwardly straddled the two eras; many were ravishingly complex yet dramatically inert, particularly as compared to Italian vocal music of the same time. Overall, a sameness grew wearying by the end of the 90-minute concert.

It’s not surprising that French opera per se lagged behind Italian opera by decades; Robert Cambert’s 1671 Pomone is widely considered the first. Rather than focus on an individual vocalist, the pieces by Boësset and Moulinié that EC performed always featured a group of singers—from four to, most often, the full complement of seven.

Several did, however, stand out, particularly the seraphic sopranos Caroline Weynants and Perrine Devillers and the commanding bass-baritone Étienne Bazola. Both Weynants and Bazola had been equally impressive at the 2018 concerts.

But, like the music itself, the Ensemble Correspondances aesthetic was more about the collective than the individual. Rarely have I witnessed close up such ecstatic, communal music-making. They’ve performed these difficult pieces so often that the evening felt joyfully effortless. Though Daucé conducted, he rarely seemed to need to as singers and instrumentalists communicated with each other via subtle nods and smiles throughout.

I appreciated but didn’t love Les Plaisirs du Louvre. While appreciating the opportunity to once hear this marvelous group in such a splendid place, I was miffed we couldn’t have had instead Buxtehude’s glorious Membra Jesu Nostri which Ensemble Correspondances performed earlier during its US tour.

A video of their Buxtehude and Schütz concert sponsored by the Boston Early Music Festival remains available for a few more days to purchase and view. I recommend it or the group’s CD of this heavenly sacred music.