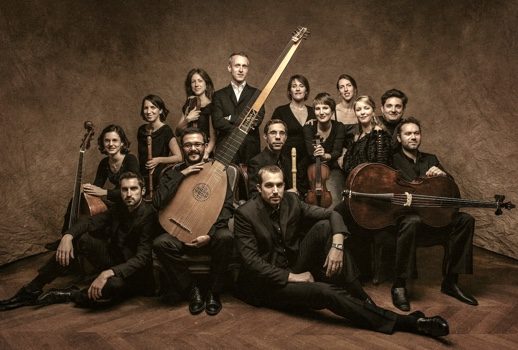 With little fanfare the French early music group Ensemble Correspondances made its US debut nine days ago and then reappeared on Sunday for what turned out to be two of the year’s very best concerts.

Sébastien Daucé and his musicians have been stealthily building an impressive discography of 17th and 18th century French vocal music including works by Moulinié, de Lalande and DuMont.

Their latest release of English ayres and songs Perpetual Night features the arresting contralto Lucile Richardot and received a rave review in Opera News by parterre box’s Judith Malafronte and subsequently made the magazine’s “Best of 2018” list.

For its Frick Collection concert on December 9th, Daucé explained that he wanted the two halves of the concert to reflect the musical interconnectedness of France and Italy.

Before intermission the ensemble of three singers and seven instrumentalists, including Daucé on harpsichord, focused on excerpts from Ercole Amante, the opera Francesco Cavalli wrote for Louis XIV in 1662 at the insistence of the Italian Cardinal Mazarin.

For the second part they turned to music from André Campra’s L’Europe Galante and La Cornaval de Venise, some or all of which take place in Italy. The concert concluded with a complete (!) performance of Rameau’s one-act opera Anacréon which Daucé said he hoped would evoke the museum’s celebrated rooms by François Boucher and Jean-Honoré Fragonard.

As appealing as the chunks of Ercole were, the group truly shone in the Campra and Rameau works. The star of the afternoon and my newest vocal crush was baritone (or rather basse-taille) Etienne Bazola whose beguiling and keenly focused voice and graceful insouciance illuminated both Campra’s solo cantata Les Femmes and the title role of Anacréon.

I have two recordings of the latter and have also heard it performed by Les Arts Florissants at Lincoln Center and Bazola’s irresistibly suave embodiment of the aging poet was absolutely the most satisfying by far.

If the acte de ballet’s choral sections sounded a bit skimpy with only three voices, the instrumental band of the seven came across with surprisingly sumptuousness in the warmly enveloping acoustic of the Frick’s ideal salon-like Music Room.

Bazola was ably partnered by Caroline Weynants (who had been so impressive earlier this year with Vox Luminis) and mellifluous haute-contre David Tricou who was erroneously dubbed a countertenor in the program.

All three reappeared Sunday at a concert of music of the season by Marc-Antoine Charpentier (the greater Charpentier!) at Corpus Christi Church in Morningside Heights as part of the long-running and invaluable Music Before 1800 series run by Louise Basbas.

Four more singers including Richardot as well as a cellist augmented the group heard at the Frick and their effortlessly refined and seemingly artless approach to some of Charpentier’s most ravishing and popular sacred music provided the perfect refuge from an ugly rainy December afternoon.

Charpentier had a fraught career during which he never really won royal favor and thus was permitted to compose but a single full-length opera, but that turned out to be Médée. a thrilling masterpiece.

For many years he was instead employed by Marie de Lorraine, the Duchesse de Guise for whom he wrote an enormous body of sacred music and small-scale secular works. In addition to Médée and the heart-stopping David et Jonathas, his best-known work is probably his grand Te Deum.

However, the works performed by Ensembles Correspondances were those that instead sometimes required even fewer than the fifteen musicians gathered.

The first half of the concert featured the composer’s celebrated Antiennes O de l’Avent written for the eight days preceding Christmas; the most remarkable was “O Rex gentium” for solo haut-contre but grippingly sung by Richardot in a hypnotic. remarkably tenor-like voice.

Interrupting those Latin antiphons was the exquisite French strophic Or Nous Dites Marie, and In Navitatem with its soothing concluding “Salve peurule” (Hail, little boy) sent us floating into intermission.

Daucé and his collaborators evoked a heavenly interplay between shepherds and angels as they eagerly awaited the birth of Christ.

While I have a couple dozen Charpentier CDs I now need to search out Ensemble Correspondances’s recording of this essential seasonal work.

Seventeen years ago at St. Ignatius Loyola Les Arts Florissants, the group which has done more to resurrect Charpentier than anyone else, performed a similar program of the composer’s Noëls but on a grander scale.

I think I may have preferred Sunday’s more personal performances in which the pure clear voices, mellow recorders and darkly reverent strings and keyboards combined to achieve that unique and heady blend that so marks late 17th century French music.

Last year Paul Agnew and Les Arts Florissants brought a selection of Charpentier sacred music to Lincoln Center’s Mostly Mozart Festival and the friend who attended with me was moved to flee at intermission because it offered a surfeit of “gorgeousness”!

I must admit that that same thought occurred to me once or twice on Sunday but Daucé programmed a canny mix that usually kept an excess of ecstasy at bay.

As I reluctantly ventured into the windy rainy Sunday night, I could only dwell on my gratitude to the Frick and Music Before 1800 for importing this transporting group to New York for two (!) radiant and unmissable appearances. May Daucé and company return soon and often!