It’s maybe not a surprise that Carmen is neither a good vocal nor temperamental fit for Isabel Leonard. 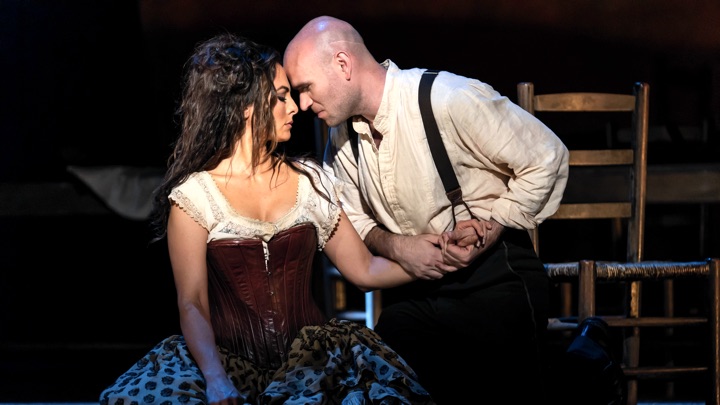 There are five performances remaining of Washington National Opera’s season-closing production of Carmen. Only one, however, is worth your time: Rehanna Thelwell will sing the title role once more, on May 27, and she is, in her role debut, a stupendous Carmen.

WNO’s Cafritz Young Artist Program, which frequently offers some of its singers a chance to perform leading roles in a performance or two of each of their productions, as was the case on Sunday, is not known for minting stars. Yet Thelwell is one of the singular talents to emerge from it in the past six years. Her top-flight voice is distinctive and rangy, the center lithe, silky, and clear, and her chest voice voluptuous and authoritative.

She’s a gutsy, energetic actress and her take on Carmen favors high-spirited immediacy rather than aloof fatedness. With a bit more time (and hopefully some coaching to improve stamina across phrases which, especially during the Habanera, were sometimes clipped by prominent breathing), she has the makings of a superior Carmen.

Her partner, fellow Cafritz young artist Matthew Pearce, blends strength with sensitivity as an equally solid and especially stylish Don José. The bottled-sounding quality of his voice lends itself well to French repertoire and the ease with which he colored his singing, including some beautiful voix mixte, gave his brusque Don José a believable air of desperation.

His natural chemistry with Thelwell even augmented the effect Katerina Burton has as Micaëla. Though she’s a limited actress, her even-tempered soprano spun generous lines that complemented the leading couple’s intensity and earned her the afternoon’s longest mid-performance ovation (after “Je dis”). 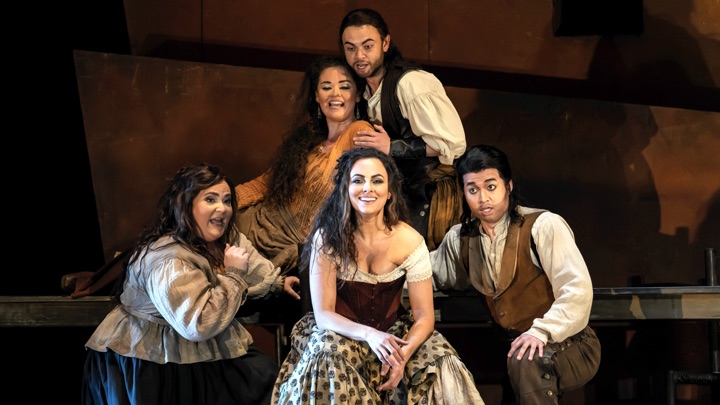 Only Jonathan Bryan was out of his depth as Escamillo, his lightweight voice a better fit for musical theatre than opera (he has a notable Anthony in Sweeney Todd at Wolf Trap this summer). But even despite a weak Escamillo, the packed Opera House audience still bristled with a star-is-born feeling for its three strongest leads and was generous with making their enthusiasm known.

But, unfortunately, this is not Thelwell’s run. Instead, Isabel Leonard’s role debut as Carmen, which opened the run on Saturday night, is the banner occasion for this revival of Francesca Zambello’s well-traveled production.

It’s maybe not a surprise that Carmen is neither a good vocal nor temperamental fit for Leonard. The rich center of her voice has always been a sweet spot, but the part consistently edges her towards the breaks in her register where her sounds falls hollow at the bottom and wiry at the top.

She tries to vary her singing across the numerous repeated strophes of Carmen’s arias, but nothing about the part seems to come to her instinctively and her Carmen is neither fiery nor icy; it’s simply room-temperature, a performance rather than an interpretation (though she does a bang-up job on the castanets!)

What might be more surprising is that almost everyone in this first cast seems somewhat miscast. Michael Fabiano, in his company debut, predictably and intensely broods his way through Don José, but it’s a broad-strokes performance with less of the attention to detail that has distinguished his interpretations in the past.

Only in the duet with Vanessa Vasquez’s did some of that musicianship come to the fore. And while Vasquez brings her own intelligence and charm, Micaëla’s tessitura edges her too consistently towards an upper register that sounded uncharacteristically pinched on Saturday evening.

Even Ryan Speedo Green as Escamillo took a little while to settle in (though the fact he sings the first half of the Toreador song seated on a horse my have had something to do with that), the part not providing ample opportunities for his robust voice to display its head-turning combo of filigree and force.

But there is strength amongst the supporting players, many of whom are shared between both casts, including the striking duo of Susannah Waddington and Hannah Shea as Frascuita and Mercédès. Cafritz singer Christian Simmons also makes a strong impression as the second-cast Zuniga while Karma Camp lives up to her name as a ceaselessly mugging and occasionally decipherable Lilas Pastia.

Evan Rogister led them all with sensitivity from the pit: his take on the score is light on nuance, but delivers in spades (pun intended) on excitement and verve (he emerged both times for his curtain call absolutely drenched head-to-toe in sweat) with particular attention to dance moments and both the orchestra and chorus performed largely with cohesion and gusto. 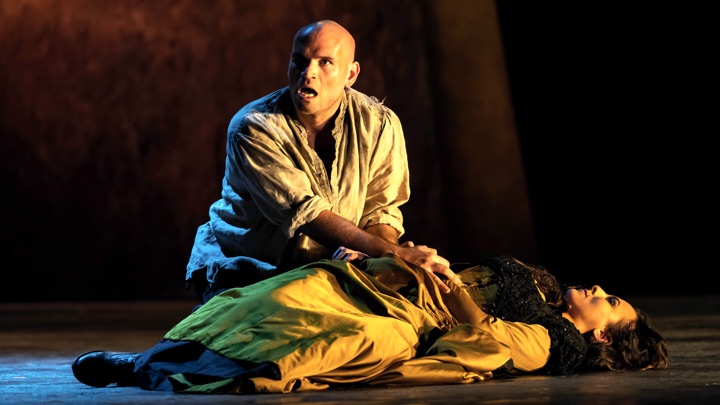 This Carmen production, which has made the rounds internationally, is one of Zambello’s sturdier stagings and benefited from the detail with which the crowd scenes in Acts I and IV were directed as well as Anna Maria Bruzzese’s handsome choreography.

Yet some of the othering grossness of the opera’s depiction of ‘gypsies’ was unintentionally augmented, rather than acknowledged and negotiated, by supertitles that substitute Mehilac and Halévy’s almost entirely fictitious “Gypsies” with the hyper-literal “Romani” and even scrub the opera of “cigarette girl.”

If resident WNO dramaturg Kelley Rourke is responsible for the subtitle updates, as her program note that focused solely on Romani history and persecution would lead me to believe, it’s just the latest incidence of the half-baked, anti-intellectual gloss applied to many DC productions with which she is involved.

As WNO’s season comes to a close, its return to the Kennedy Center is to be celebrated. But this particularly strong pack of Cafritz Young Artists, which made impacts in this Carmen as well as the earlier quartet of new, monument-inspired operas, Written in Stone, deserves equal kudos. And, in the case of this Carmen, better billing.