With no disrespect to Nadine Sierra, who as Lucia acquits herself honorably if not magically in vocal terms, the undisputed cause célèbre here is director Simon Stone. 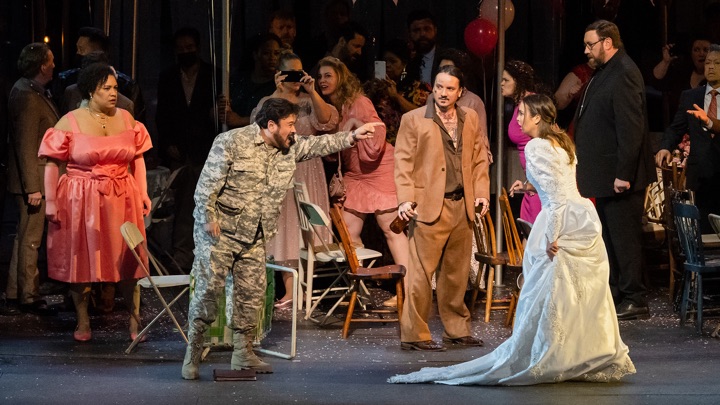 The title of a Brecht play I have remembered since college: Die heilige Johanna der Schlachthöfe—Saint Joan of the Stockyards. Well, think of this as Lucia of the Truckstop.

One might expect in the usual order of things that reviewing a new production of a bel canto masterpiece—one which for 186 years has been viewed as a virtuoso steeple chase to judge its soprano heroine—would begin by considering that soprano. This, however, is an unusual case.

With no disrespect to Nadine Sierra, who as Lucia acquits herself honorably if not magically in vocal terms (more on that later), the undisputed cause célèbre here is director Simon Stone, whose work is familiar to New York theater audiences particularly through a much-lauded adaptation of Lorca’s Yerma, where he also focused on a female character in extremis.

As I’ve already suggested, Stone’s adaptation of Lucia di Lammermoor recasts the action to an unnamed contemporary American Rust Belt town, which is falling prey to violence, drug abuse, and various other all-too-familiar societal issues. Stone’s tone—here as it in Yerma—is an odd admixture: elements of highly-detailed naturalism combined with a heavy dose of symbolism.

This is seen most clearly in designer Lizzie Clachan’s striking set, an assemblage of fragmented but garish store fronts, signage, decaying buildings and car shells, usually set against a night sky, and often in constant circular motion courtesy of the Met’s enormous turntable. 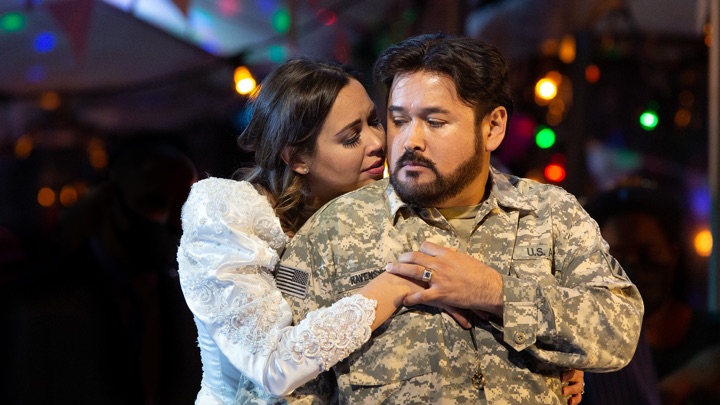 Augmenting the action played out here are video transmissions (some live, others clearly prerecorded) that appear above the stage, often giving a split-screen perspective to the audience view. Another scenic device familiar from previous Stone productions is a cutaway house, revealing multiple rooms in a single frame.

Some audiences will dismiss all of this entirely, finding it tawdry and trivializing. Others may be thrilled by its visceral impact and feel it connects us to a world that otherwise seems far removed and storybook-quaint.

I’m somewhere in between. Now and again, there were moments that grabbed me. The harp glissandos that open Lucia’s first scene here are heard as we watch her blissfully feeling the effects of a drug hit, and suddenly I felt their ghostly beauty in a whole new way.

The opening scene of the second act, with Lucia and Enrico arguing as they marched around the house, ultimately sitting together near a car while a small, sad wedding was being set up in ugly plastic-enclosed tents, felt strangely right and even touching. (This scene also proved the best fit for Sierra’s voice, showcasing her lovely tawny  tone color, as well as her natural feel for the lyric line.)

But more often the action was overly busy and confusing. You could, if you were so inclined, spend hours trying to unravel some of Stone’s directorial caprices 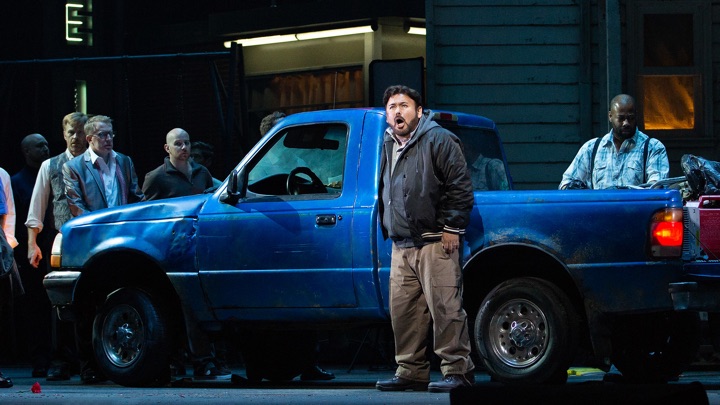 In Lucia’s first aria, for example, she sings of a ghostly shadow—traditionally we understand this to be an imagined vision that suggests Lucia’s incipient madness. But here, the “ombra” has a corporeal presence (and even takes a curtain call!). Is Lucia therefore remembering an actual event?  Beats me.

I’m also at a loss to understand why a contemporary American Rust Belt town has a drive-in that’s showing—apparently non-stop—My Favorite Brunette, a 1947 comedy starring Bob Hope and Dorothy Lamour.

More damagingly, some of Stone’s silliest and most egregious excesses—a brawling fight among a group of female wedding guests, for example, or Enrico climbing over a truck while drunkenly swilling from a bottle—are clichés that condescendingly reinforce class prejudice.

For all Stone’s attempt at realism, he hasn’t managed to translate it into actor work, which here for the most part—despite some earnest attempts—rarely achieves a sense of specificity. It’s immediately apparent in the chorus, which—as opera choruses too often do—mostly just stand around.

The principals are clearly trying to deliver the vision here—no one more so than Sierra, who is often seen in intense close-up, and who gives herself fully to the required physicality. But virtually no one makes an impact in terms of articulating the text and shaping the line with color and meaning, which is where real operatic acting needs to start.

On the musical side, this Lucia was far more evenly calibrated, but also a mixed bag. As I mentioned earlier, Sierra fares best in the less ornate and more narrative music of the second act. The ornamental passages in the first act and the mad scene are more problematic—her technical arsenal is considerable but not perfect.

In the first act aria and cabaletta, “Regnava nel silenzio” and “Quando rapito in estasi,” she neatly articulated the trills but rarely pitches them correctly. (The later ones in “Spargi d’amaro pianto” were turned into very odd descending mini-runs.) The mad scene runs were delivered accurately, but she often seemed to break up phrases to make articulation easier. The acuti were nailed, but the tone quality sometimes turned glassy.

Javier Camarena (Edgardo) is similarly appealing, though his acting range is limited. On opening night, his voice sounded tighter and less honeyed than usual, but his articulation of the words was strong and his sense of line was exemplary.

My guess is that this Lucia production will make a minor short-term splash (positive and negative), and last a season or two at the Met—after which it will be replaced by a more centrist and softer reading, and largely forgotten. As for the cast, they’ve done reasonably well by their roles, but I don’t think we’ll be remembering any of these performances—or the show itself—as a high water marks in Met history.