She wants to be a prima donna

Ireland’s Wexford Festival Opera marked its 70th birthday in 2021 by presenting four prima donnas who made important early appearances at the festival in solo recitals across the globe. 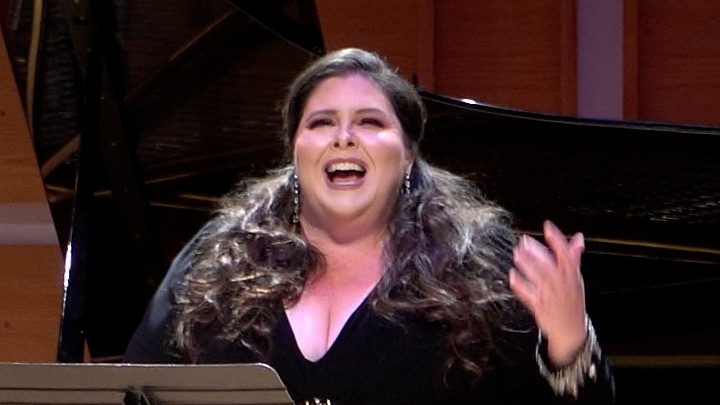 In 1951 a group of opera enthusiasts in Wexford, two hours directly sound of Dublin, joined together and mounted Balfe’s The Rose of Castille. One opera was presented for the next four years with a second added in 1956. Beginning in 1963, the festival settled on an annual tradition of staging a trio of rarely performed works, That paradigm continues, though recently it has increased its activities to include additional shorter works and new commissions.

Two friends of mine have been to Wexford, one in 2005 when the festival was still held in its decrepit theater, the other in 2011 after Ireland built a sparkling new National Opera House which still offers the attractive intimacy of the old venue. Both enjoyed the charming town and praised the festival’s strong musical values, effective productions and enterprising programming.

Wexford’s detailed performance archive makes for fascinating investigation. Its earliest years focused on the bel canto repertory and more works by Donizetti have been performed there than by any opera company besides that of Bergamo, the composer’s hometown. Gradually with Ernani and La Gioconda, it expanded into more dramatic operas while also continuing to feature Irish composers like Balfe and Charles Sanford.

The festival offerings often come from the 19th century, but occasionally Wexford has ventured further back as with its 1975 L’Erirea by Cavalli which starred Paul Esswood and the husband-and-wife team of Philip Langridge and Ann Murray.

While not every work Wexford has revived has entered the standard repertoire, the festival deserves enormous credit for always digging deep. Where else would one have gotten the chance to see stagings of Goetz’s Der Widerspenstigen Zähmung or Braunfels’s Prinzessin Brambilla or Cagnoni’s Don Bucefalo?

The 2013 production of Cristina, regina di Sevzia has, for example, led to a valuable reconsideration of Jacopo Foroni. The Wexford broadcast of Cristina can be heard on a past Trove Thursday posting.

The eye-opening 2022 season beginning in late October includes Halévy’s La Tempesta (an adaptation of Shakespeare to an Italian translation of a libretto by Scribe that premiered in London!); David’s Lalla-Roukh (which I saw when Opera Lafayette performed it some years back) and Dvorak’s Armida, a work rarely performed outside the Czech Republic.

In addition to bringing back to life many long-forgotten works, Wexford has introduced to the international scene many notable singers just starting their careers. During the 50s, tenor Nicola Monti returned year after year, while Graziella Sciutti, Fiorenza Cossotto and Janet Baker appeared in La Figlia del Reggimento, Anna Bolena and La Gazza Ladra, respectively.

During the 1960s, Mirella Freni, Giacomo Aragall, Jeanette Pilou, Pietro Bottazzo and Angeles Gulin were among the many young artists attracting notice through their Wexford debuts. While most singers would come for just one appearance, Christiane Eda-Pierre became the festival’s reigning diva in the early 1970s via revivals of Lakmé,, Les Pêcheurs de Perles and Il Pirata.

Ugo Benelli took over from Monti and too returned to Ireland many times.

Not every festival presentation guaranteed a future star, but sometimes intrepid audiences would hit the jackpot as in 1986 when Rossini’s Tancredi featured Inga Nielsen, Kathleen Kuhlmann and Bruce Ford, the latter two among the scores of American singers who have come to Wexford, including Meade who made her European debut there in 2010 in the title role of Mercadante’s Virginia. That too can be heard at a 2017 Trove Thursday edition.

Judging from online comments over the years, Meade has proven to be a surprisingly divisive performer inviting widely divergent opinions. I, for one, have been a fan since I first heard her at the 2009 Caramoor Festival in Semiramide. Those who only know her Babylonian queen from the unfortunate recent Met revival might be surprised at how brilliantly accomplished the Caramoor Rossini concert was.

But then she again flourished under Will Crutchfield’s baton in Les Vêpres Siciliennes and Lucrezia Borgia. While Sondra Radvanovsky got the first nights and most of the acclaim, Meade’s performances as Norma at the Met in both 2013 and 2017 opposite Jamie Barton were admirable as well.

Absent from New York since her acclaimed role debut at the Met as Margherita in Mefistofele, Meade returned Thursday in refulgent form pouring forth almost too many rich decibels for Merkin’s intimate hall in her opening “Dich, teure halle”! It, as well as her recent Seattle Sieglinde, strongly suggested that she may be seriously considering moving beyond the Verdi and bel canto operas that have dominated her schedule to some German repertoire.

The remaining works on Meade’s brief program implied that she’s well aware that she excels as an opera singer rather than as a recitalist. The three grand Meyerbeer songs that followed the Wagner called for big, expansive singing which the soprano effortlessly supplied. She modulated her voice more successfully while still sending out gleaming phrases that spellbound the sparse but enthusiastic crowd. “Le voeu pendant l’orage” in particular could have served as a heroine’s scena in any Meyerbeer grand opera.

Korngold’s Drei Lieder, op. 22 and Amy Beach’s 3 Browning Songs, op.44 also called for bold, extroverted singing in which warmly enveloping phrases in the midrange were crowned by ringing high notes. Perhaps there might have been a bit more variety: lighter songs were conspicuously absent.

Meade gave prodigiously of her voice but words throughout were often difficult to catch. The presenters did her a great disservice by failing to provide texts and translations for these unfamiliar works. The program didn’t even include notes about or synopses of the songs.

As is so often the case in recitals, Meade’s two encores, as with the entire program beautifully accompanied by Huang, displayed a relaxed manner that earlier selections lacked. Her soaring “Zueignung” made me ponder several Richard Strauss heroines I’d like to hear her tackle: Ariadne, for one. For the final selection, her music stand and iPad were shoved aside for a jolly Victor Herbert’s “I Want to Be a Prima Donna” in which every word finally was crystal clear!