She Loves Me can take a beating. 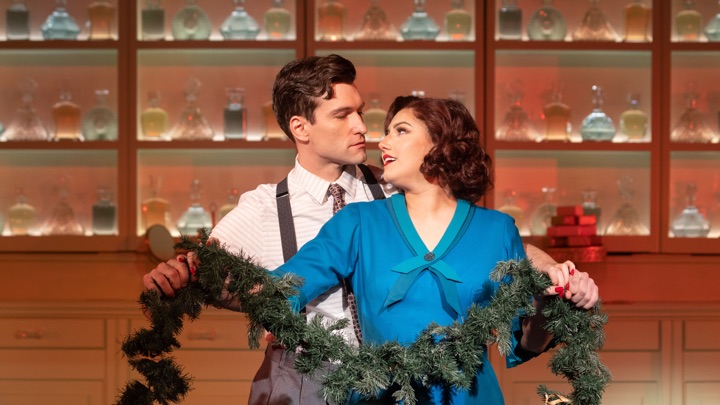 By observing this, I don’t mean to imply that Signature Theatre’s production does any great damage to the show. Its earnest, gentle virtues still glimmer through, buttressed by a charismatic cast and energetic ensemble.

But director Matthew Gardiner, Signature’s Artistic Director, whose directing with the company has covered musicals from Threepenny Opera to La Cage aux Folles, misreads She Loves Me, and, as a result, what lies beneath the sugary gloss of this show go unplumbed and its patently uncynical champagne froth goes flat.

By observing this, I don’t mean to imply to She Loves Me has some sort of seedy underbelly that needs to be spelunked or an inherent darkness suspended over its outcome. What charms about this show, about two feuding perfume clerks in 1930’s continental Europe that discover their Lonely Hearts’ Club pen pals are actually each other, is its simplicity.

Joe Masteroff’s spare, suggestive dialogue makes way for tuneful, jubilant, klezmer-flecked music from Jerry Bock and narratively ambitious, if cornily contrived, lyrics by Sheldon Harnick (“I must stop thinking with my skin/I will not be a mandolin/That someone strums and puts away/Until he gets the urge to play”) as a perennially beloved plotline plays out. The stakes in She Loves Me are incredibly low; watching these two querulous sales associates submit to the hand of romantic comedy destiny is usually a refreshing, nostalgic exercise.

But from the very first scene the central couple Amalia and Georg meet, Ali Ewoldt and Deven Kolluri, both inexplicably good-natured, it was clear that this production would not be drawing on more than a surface-level fizzle. Both Ewoldt and Kolluri have presence to burn, but without any noticeable acrimony to overcome, they both seemed naively at sea for the nearly three-hour runtime. 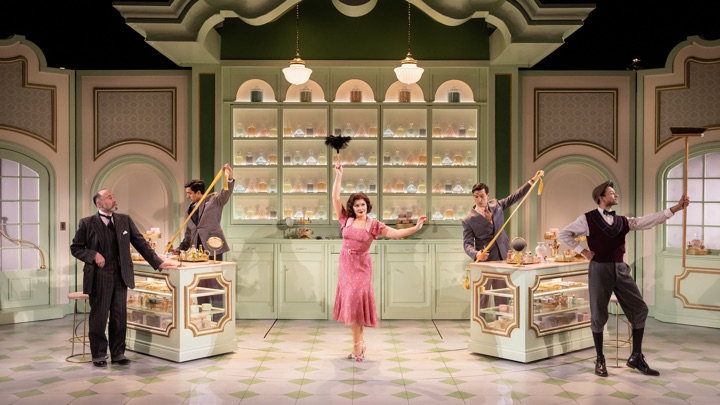 Kolluri’s outsized, gangly presence, which made his Lancelot the weak link of an otherwise strong Camelot on Long Island this summer, might have seem better suited to the cantankerous Georg Nowack. But his portrayal was meandering and his voice, which, while powerful and attractive, projected unevenly across his range.

Ewoldt, whom I remember enjoying as Ashley Park’s understudy in the 2016 Lincoln Center Theater revival of The King and I, is more decisive though similarly (un)directed as a passive aggressive Amalia. Her vocal bona fides cannot be doubted: the combination of her powerful soprano and studied earnestness with the attentive, swooning conducting of music director Jon Kalbfleisch produced the finest “Vanilla Ice Cream” I have yet to hear.

But her exchanges with Kolluri never caught fire. Ultimately, She Loves Me is only saved from saccharine sentimentality because its plot (and its music) so unflinchingly redeems its rather unlikable characters (who but these two could be won over by such pretentious philosophizing over Russian literature?). The specter of Barbara Cook may loom large over this show, but Amalia is more of a Cunegonde than a Marian Paroo in terms of likability and some grit would have anchored the evening.

Maria Rizzo’s volcanic Ilona Ritter, the amorous, airheaded cashier at Maraczek’s perfumery, offered both grit and charm. Her take on the part may be a little more vampy than usual, but her forthright characterization and belt were a welcome counter to Ewoldt’s Amalia and her “I resolve” was spat at the audience with a piquant vehemence.

But she, too, lacked a spark opposite Jake Loewenthal’s suave and slimy salesman Steven Kodaly. Only Bobby Smith as the quirky, kindly Ladislav Sipos was able to provide the circumspect warmth that makes this show. His scenes, particularly opposite the pert shop boy Arpad (Emmanuel Elliot Kay), stood out.

Beyond Gardiner’s miscalculations about the show’s arc and the rapports between characters, Signature’s She Loves Me is a handsome production. From Lee Savage’s detailed, elegant unit set to Alejo Vietti’s glamorous costumes, the well-dressed ensemble spins from the perfume shop to the Café Imperiale (overseen by David Schlumpf’s uptight Head Waiter and Daniel Powers’s acrobatic busboy, both excellent) and beyond with stylish ease.

The uniformly strong ensemble coalesced most satisfyingly in that Café scene, with Kelly Crandall d’Amboise (a member, by marriage, of the dancing dynasty) providing rigorous choreography better calibrated for these dance break antics than in some of the earlier, more intimate workplace scenes.

As Amalia sits alone at her table waiting for the “Dear Friend” from her letters to arrive to their scheduled meeting, her naivete and insecurities cannot help but momentarily endear her to the audience, as does Georg’s subsmacked bumbling when he arrives to see her there. That moment, even with actors blithely stranded in it, still gnaws at your heartstrings. I just wish the same could have been said for the rest of the evening.

She Loves Me runs through April 24 at Signature Theatre in Arlington, VA.