From the multiple standing ovations, to say nothing of the gentleman in the front row waving the Mexican flag, I can safely say that a very good time was had by all. 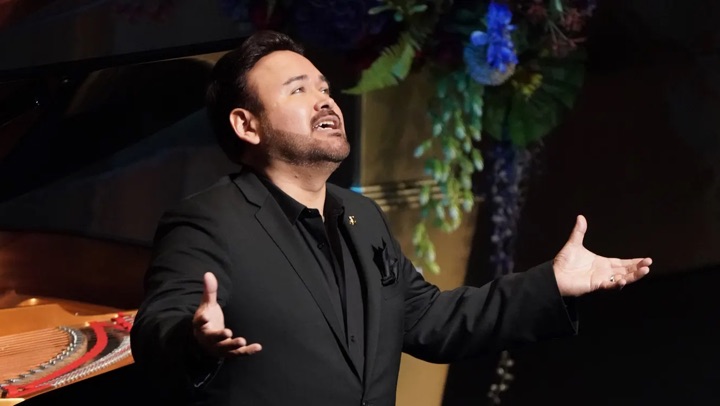 With the strong influences of our Latinx culture it’s only fitting that LA Opera should feature the best of talent from south of our borders. Javier Camarena gave us a stupendous recital back in October of 2019 of both bel canto specialties and his native canción.

It was no surprise then that he was asked back and this time two recitals were scheduled for March 31 and a matinee on April 2. From the multiple standing ovations, to say nothing of the gentleman in the front row waving the Mexican flag, I can safely say that a very good time was had by all.

Mr. Camarena made a most welcome debut here in 2017 with an exquisite Nadir in Bizet’s Les pêcheurs de perles and his deportment on the concert platform is both sincere and charming. He started the performance by asking everyone to take out their phones and record him wishing his wife a happy 17th anniversary since she was unable to travel with him. He then asked us to post to our own social media. So it was a big love-fest from the beginning.

He then opened the concert proper with Bellini’s “A te, o cara” from I Puritani. And yes, you read that right. Mr. Camarena is one of those rare singers who hits the stage fearlessly, firing on all cylinders. The vocal line with its long-breathed phrases and tessitura skimming the top of the ledger lines posed no challenges for him. Although the surrounding vocal ensemble was missed in the concert arrangement it was a rare treat to be able to concentrate solely on the tenor line.

He moved straight on to “La mia letizia infondere” from Verdi’s I Lombardi and it proved an excellent choice. He easily balanced the more fiery outbursts with the bel canto graces. Most especially in the delicious echoing phrases of “Dove mortal non va” which ornament on repeat.

Mr. Camarena repaired backstage to refresh himself and we were treated to a performance by his extravagantly talented accompanist A?ngel Rodri?guez of his own arrangement on the Habanera from Bizet’s Carmen. To call his virtuosic playing “flamboyant” would practically be an understatement. Yet he managed to maintain a fine sense of humor throughout and teased the audience with each new variation until a surprise finale. 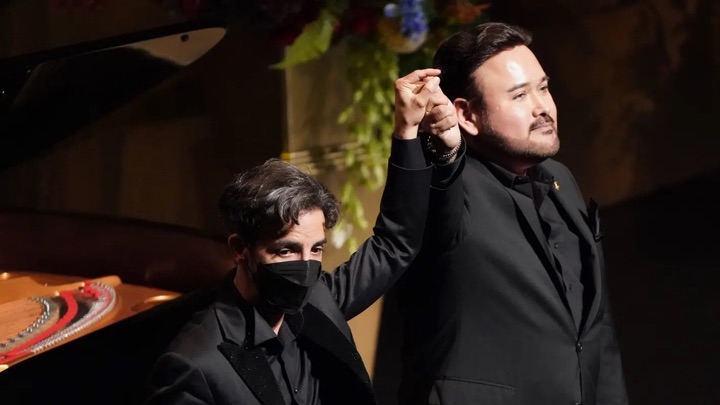 Our tenor returned and offered the aubade from Lalo’s Le Roi d’Ys, “Vainement, ma bien-aimée”. It’s a gentle piece, practically forgotten, that only requires a good voix mixte and an full measure of charm, both of which Mr. Camarena has in abundance.

The very slow tempo allowed him to wring every last drop of sentiment from it and you could almost hear a collective sigh from the crowd at its conclusion.

Mr. Camarena finished the first half with a bang with Des Grieux’s helpless plea to forget his former lover in Act II of Massenet’s Manon, “Ah! Fuyez, douce image”, It was an impassioned performance that never allowed emotion to distort the vocal line or the composer’s markings.

The second half of the program was dedicated to Latinx favorites and it is a treat to hear this repertoire sung by one of the great voices before the public. A testament to his versatility that his technique allows him to easily bridge so many styles with such ease.

He began with two well-known zarzuela arias. First the “Serenata” from Soriano’s El guitarrico and then “Te quiero, morena” by Serrano from his El trust de los tenorios. Both given fervent performances with extraordinary nuance and a ringing top which brought cheers from the audience.

Mr. Rodruiguez offered another musical respite while our tenor took his leave backstage with his own arrangement of the Intermedio from Giménez’s La boda de Luis Alonso, This time bringing the full force of his skill without sly comic apologies. His playing so bravura at times I would have sworn he had six fingers on each hand.

Mr. Camarena returned with, what by now must be, his party piece “La malagueña” arranged by Mr. Rodriguez. A sad love song about a young man who’s too poor to win the young girl he loves from Malaga. It allowed our tenor to once again show off his extraordinary head voice and a seemingly endless (and I mean endless… .check some of his performances on YouTube!) stream of breath that brought impromptu standing ovations from the crowd before he had even finished.

For the last piece on the program we got an absolutely roof-raising rendition of the “Serenata huasteca” by Jiménez also arranged especially by Mr. Rodíguez. As the piece got livelier and livelier not only did our accompanist hit nearly every key on the keyboard at least twice but Mr. Camarena invited us all to do a little syncopated clapping. At the big high note finish the crowd practically jumped to its feet.

Naturally both returned to the stage for some carefully unrehearsed encores which Mr. Camarena dedicated to all the great female composers of Mexico. They included beautiful performances of Consuelo Velázquez’ “Franquenza” (who also wrote “Bésame Mucho”) and “Júrame” by María Grever.

From the number of spontaneous standing ovations in the second half of this program there’s no question about the quality of the music making and the effect on its intended audience. It seems a tad churlish but I do hope that we see Mr. Camarena on stage at LA Opera soon in something requiring a ruffled shirt and a saber.