Michel van der Aa’s new opera UPLOAD at the Park Avenue Armory explores the various ethical issues surrounding AI while coming back to a set of classic philosophical questions about free will, pain and the nature of the soul. 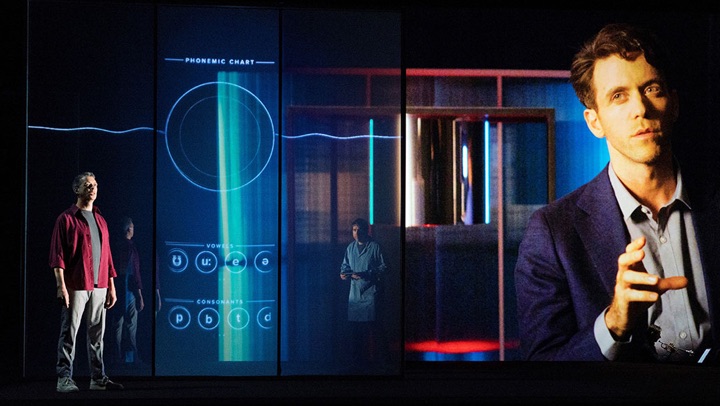 The setup is simple: in an undefined near-future, certain people (read: the uber-rich) have begun to transfer their entire brain content and personality to an AI program called “Upload” (after which they will be referred to as “uploads”), in order to preserve them forever. This process requires the killing of their human body, but enables immortality for the soul, including the ability for personal growth and change, with the only major drawback being the loss of the sense of touch (oh, and the potential of going crazy).

A Father (Roderick Williams) has undergone this process without the knowledge of his Daughter (Julia Bullock), to whom he now appears as a wavering hologram figure. Her fury and sense of betrayal at his decision to commit this quasi-suicide and his eventual realization that getting rid of his physical pain did not solve his emotional suffering provides the major dramatic thrust of the work.

Thematically, this is nothing we haven’t seen before; particularly in the era of other sci-fi works like Ex Machina, Westworld, Altered Carbon, the “San Junipero” and “Be Right Back” episodes of Black Mirror, or even Her.  While not a topic that has been extensively explored in opera, it feels very hot right now in other media, which perhaps is causing me to judge Van der Aa more harshly than he deserves.

Van der Aa, who was composer, librettist, and director (“Gesamtkunstwerk realness,” as my friend Lauren termed it), added a few interesting twists to this premise by exploring the ties of these types of narratives to the ethical questions brought up around suicide, physician-assisted or other wise and end-of-life care when children are put in the position of deciding whether to end their parents’ lives.

The opera ends with the Father asking his Daughter to delete him (which he cannot do himself-she must consent to it), having found that “life” as an Upload is not that much more bearable than life in a human body. “Wherever you go, there you are,” as they say.

While this was the natural conclusion to Van der Aa’s setup, I couldn’t help but wish that it had been left more ambiguous, and that the Bullock’s Daughter was given a bit more space to explore what this choice means to her.  While we don’t know at the end of the opera whether or not she does delete her father’s Upload, it’s quite clear that Van der Aa thinks that these types of programs should never exist. 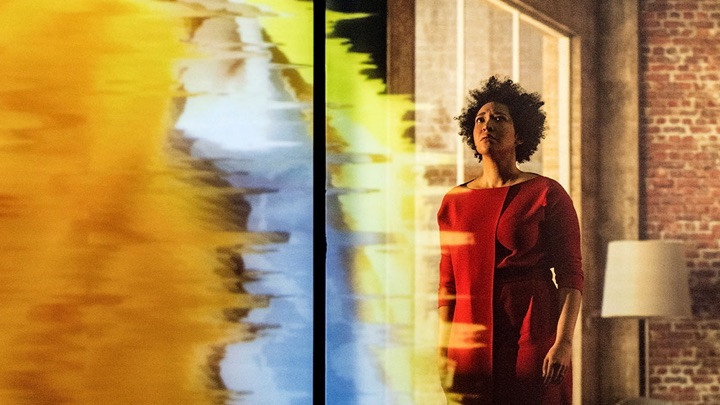 Where the libretto went wrong was wearing its themes and morals too much on its sleeve; while certain touches here and there were unique, the ultimate moral that it is, in fact, better to live and die as a human without attempting to live forever via AI after removing your painful memories really… just…  isn’t that original.

I don’t disagree with this premise, not at all; I’m just not sure I needed quite so many on-the-nose reminders of how bad this type technology and the smarmy assholes who market it as the “future of human evolution” are (I’m thinking here of the absolutely classic tweet: “I know writers who use subtext. Those writers are cowards.”).

The singing left little to be desired, however. Williams was superb as the Father. He brought his signature light touch and graceful phrasing to every moment of his singing, humanizing this character considerably with his voice alone.  Van der Aa seems to understand what makes Williams a compelling performer, even if he didn’t always give him much range to explore vocally.

Williams has that beautiful understated quality to him, which was necessary to temper the character’s mood swings and brought the high-mindedness of the concept back down to earth. He also has a unique ability to elevate sung English—part of what makes him one of the very finest living interpreters of British music. Only he could have pulled off some of the clunkier moments in the libretto, which relied a bit too heavily on slam-poem-style verb-noun combos (“spark, giggle” “slosh, belly” “beat, vein” yikes).

Bullock, whom I saw most recently in the absolutely bonkers Leos Carax opera-film Annette, made another successful bid for herself as the queen of new music, and I imagine she’ll make her whole career in works like this. She imbues this repertoire with sensitivity and warmth, and brought ease and considerable vocal nuance to this score.

Her character was almost entirely reactive, however, which left her a fairly small dramatic palette to play with. Angry and hurt are great emotions to sing, but there was little else for her to feel, and the brief moments of reminiscence of her (apparently) idyllic childhood with her father felt a bit too pat for my taste. Would a father whose life was more or less defined by his depression and desire to commit suicide really have had such an uncomplicated relationship with his child? Would she really have idolized him so thoroughly until the moment of his Upload?

I’m not sure Van der Aa made enough use of either of them, frankly. Much of the 90-minute run time was consumed with video footage, all staged as a promotional documentary for the Upload program. Again, the budget here must have been massive, as all of the actors cast in these fake commercials have had extremely successful television careers.

Katja Herbers (of Westworld and others) and Ashley Zuckerman, who appeared on Succession (as the similarly slimy Nate) were both wryly funny as evil bio-capitalists making these long video sections move quickly, and even smaller roles were played by fairly big names. These interludes were excellent ways to world-build without giving the singers too much exposition to declaim, but it meant that there was a less time for singing or exploring these central characters than I wanted.

Van der Aa’s integration of acoustic and digital sounds, along with his striking use of percussion was often absolutely thrilling, especially towards the middle of the run-time. His skittering, shivering string textures, paired with humming, throbbing synths, and punctuated by rays of warmth from brass and organ were inventive and exciting, encapsulating the composer’s skill for working across styles.

The score did, however, fall into a trap that I’ve noticed in a lot of contemporary opera: fascinating and creative instrumental writing, but rather blah vocal writing—lots of middle-voice declamation on single notes, lots of sixth and ninth leaps, but little in terms of range, color, and lyricism for the singers. The lyrical moments, when they came, had beautiful moments, but to my ear they never fully blossomed, leaving me feeling like I’d just listened to an hour and a half of recitative without ever getting to a true emotional high.

In spite of these criticisms, I do have to pause for a moment to compliment the production. UPLOAD made for a visually stunning evening. Under the massive vaulted ceilings and industrial lighting tracks of the drill hall, the new opera employed its own arsenal of VFX, motion-capture, real-time graphics, and fractal art, those trippy geometric projections that recall both space travel and underwater exploration at once.

It looked slick and very, very expensive, a  masterclass in how this type of digital-analog combination can be done well—I’ve never seen better. The mostly Dutch FX and team deserve high praise for their design work, as does Theun Mosk’s set and lighting design. As a piece of stage-craft, this was a success and absolutely worth the price of admission.