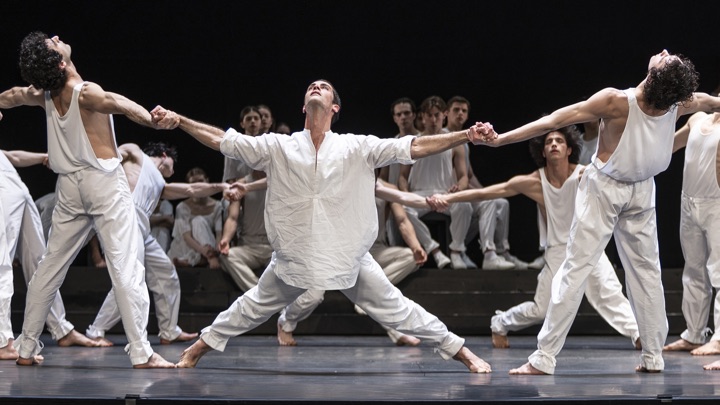 Saturday night at the Music Center the pre-game lecture by our Music Director James Conlon was pre-recorded and launched from the Jumbotrons on the plaza. Maestro Conlon had a number of important points to touch on in an illuminating essay that’s available on the LA Opera website by clicking here , the first of which was whether it’s legitimate for an opera company to perform a sacred work staged as a ballet. His answer, of course, was,“Yes”.

My intellectual curiosity with Johann Sebastian Bach has only extended to his Cello Concertos, which I love, their neighbors the Brandenburgs and the Goldbergs, whom I know in passing, and having sung in his Magnificat in my Baltimore Symphony Chorus days.

It was surprising to learn that even though Mr. Bach was twiddling away in the organ loft of First Lutheran of Leipzig for nearly 30 years, producing hundreds of musical works over a vast range of styles, that he was relatively unknown in his time. It wasn’t until the 20-year old Felix Mendelssohn mounted a Berlin performance of Bach’s St. Matthew Passion, just over one hundred years after its premiere, that there began an appreciation for Bach’s works and the understanding of his eventual place in musical history.

John Neumeier has been Chief Choreographer and Artistic Director of the Hamburg Ballet since 1973 and his production of the Passion had a 10-month gestation period culminating in the premiere of its first version in June 1981. Eventually performed complete in the opera house it became a repertory staple and, having toured the world’s stages, has finally arrived at LA Opera.

Mr. Neumeier brought us his staging of Gluck’s Orfeo ed Euridice in 2018 and it proved a satisfying combination of music and dance. Mr. Neumeier gives his dancers an instantly recognizable physical language and in a pure ballet setting that language was even amplified further telling the story of the Gospels of Matthew no. 26 & 27 from the Last Supper to the Crucifixion.

We were greeted by a bare black stage with three steps leading to a platform at the rear with benches and a square red pallet downstage left. Centerstage in a spotlight was the shroud of the Christ. After Maestro Conlon and the soloists entered the pit there was a pause and the rear scrim upstage rose to reveal the chorus. 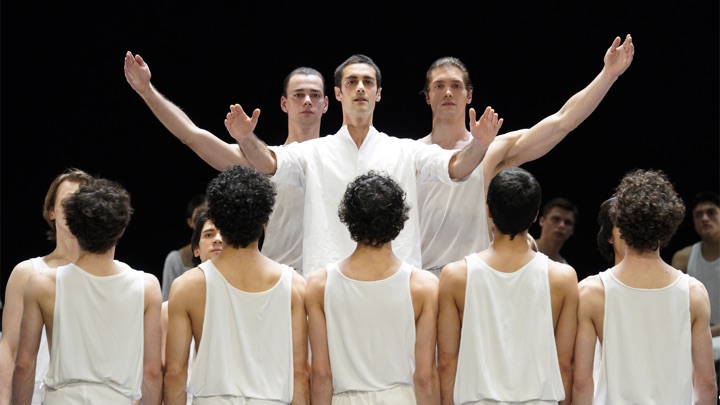 When the music began I thought to myself, “This isn’t Bach?” and then realized we were listening to the Ukrainian National Anthem. The entire audience was soon on their feet in honor and tribute.

After a brief pause the Hamburg Ballet corps filed on and took their places. What followed was by equal parts challenging and hypnotic to watch. Everyone was in white with the men dressed in simple open t-shirts and loose fitting pants and the women in modest knee length dresses prevented the dancers bodies from being sexualized.

The almost total synchronization of the corps in relation to the music and each other was revelatory and I can’t recall having ever seen a group of dancers so concentrated and engaged. That special level of communication in Mr. Neumeier’s choreography blossomed into some extraordinary moments.

The gestures of fellowship between Jesus and his Apostles where they would pass under his extended arm in blessing. The representation of the angry mob as controlled chaos calling for the judgment and then Mary Magdalene dancing with one toe shoe and the other foot bare.

Later a painful pas de deux between Mary and Jesus, danced by Xue Lin and Marc Jubete, where they alternately supported and embraced each other.  A dancer who represented the cross being carried across the stage on the back of Mr. Jubete.  The finale when it suddenly seemed like the number of dancers tripled on stage became overwhelming visually and emotionally.

When you’re young you watch ballet and think,“Oh sure, I could do that”. A couple decades later you watch these young athletes leaping into the air like gazelle and the voice in your head says,”I just shattered every bone in my body.”

In the pit Maestro Conlon lavished all of his considerable gifts on the musical side of things. The two baroque orchestras Bach calls for comprised of the violins, violas, cellos and bass with flute, oboe, and bassoon of the LA Opera Orchestra. Two organists, a viola da gamba, and cello provided the continuo accompaniment.

Modern instruments played in the modern fashion but it matched the size of the performance. His tempos always seemed natural and fleet and easily flowed from one number to the next.  His leadership in the pages (and pages) of recitative was especially strong and he brought a stunning array of colors forward from such a relatively small number of players.

The chorus so far upstage, and behind the scrim, required discreet amplification  only enhancing their formidable contribution and its impact in the theater.

A remarkable and vocally diverse group of soloists was led by the Evangelist of Tenor Joshua Blue. I was surprised to note that, having been given an aria by the composer, he held the entire evening together solely with the strength and sensitivity in his delivery of the recits. Scalding emotional peaks included Peter’s denial of Jesus and later in the Crucifixion.

In what can safely be called “gloaming” phase of her career Susan Graham took the mezzo-soprano solos. If she was a shade tentative at the outset she gained a firm footing fairly quickly. I’m happy to report that her voice has lost none of the special qualities that make it so unique iIncluding that translucent burgundy timbre. The elegant messa di voce effects easily showed how her formidable technique still serves her well.

This was my first opportunity to hear Tamara Wilson live and she displayed a bright and true tone in the soprano solos. For such an imposing Verdi singer (and budding Isolde) I was pleasantly surprised at her versatility to say nothing of her subtlety.  She and Ms. Graham blended so magically together in their one duet I’m sure I wasn’t the only one who wished for more. Certainly a highlight of the whole evening.

Michael Sumuel sang the recitatives of Jesus in a lush baritone and he gave the  German text good dramatic point when necessary. Also not given a proper aira by the composer (because I’m certain that would have been forbidden) it made his job doubly difficult and his contribution especially appreciated.

Ben Bliss had the tenor’s two solos and his voice has developed considerably since he sang Tamino here back in 2016. He rang out into the theater with an easy amplitude and clean tone.

Finally Kristinn Sigmundsson brought his ample bass to the proceedings and he was especially moving in the last contrapuntal “Mach dich, mein Herz, rein” which just seemed to roll out of him on an unending spool of melody married to rhythm.

To be honest I was daunted by a performance of an unfamiliar work that was estimated to last four hours with only one intermission. So you can imagine how relieved I was when I saw that the timing had been revised down to 3:45!

In retrospect I could have sat there all night letting that music and that staging wash over me. I apologize if I seem to have come close to exhausting my superlatives. I can only blame a first exposure to something as powerful and as beautiful as the sun.