In spite of the fact that Rossini and his librettist Jacopo Ferretti removed all the magical elements from the story, therefore making it far easier to produce, there was more than enough enchantment in the singing, and intermittently in the production to enjoy. 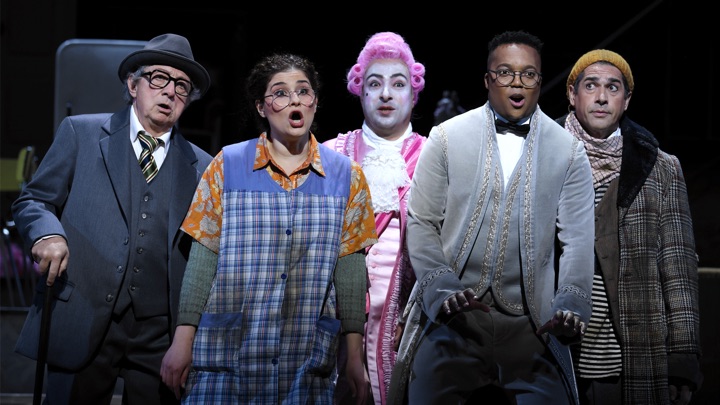 I often think that Los Angeles really only has one season: perpetual spring with intermittent Santa Ana winds. For those not familiar, the dreaded Santa Ana’s usually come in the fall and bring not only high temperatures (it was 81* this Thanksgiving) but unusually hot, dry, winds that can irritate not only sinus cavities but the general population as well.

Therein they are blamed for a multitude of misfortunes be it our frequent wildfires, the congestion of the 405 and/or your nasal passages. I feel particularly sorry for singers who arrive in town innocent of these sirocco’s and then are expected to sing over a throat newly refurbished with sandpaper.

So I was saying silent prayers for the cast of Sunday afternoon’s matinee of Gioachino Rossini’s La Cenerentola by LA Opera as I ascended unto the Music Center Plaza. The Dorothy Chandler Pavilion has been festooned with an enormous electric red bow while the pond surrounding the Mark Taper Forum has been dotted with tortured and spindly white-flocked trees that look cast-off from Melania’s last Christmas at our nation’s capital.

Still there was no denying the festive, family, atmosphere with photo booths, hot cocoa bars, and a crown decorating station that proved more popular with attendees quite a bit older than it was intended for.

In spite of the fact that Rossini and his librettist Jacopo Ferretti removed all the magical elements from the story, therefore making it far easier to produce, there was more than enough enchantment in the singing, and intermittently in the production which fluctuated from modern-day to a dream-state fantasy, to enjoy.

I’ve reviewed Laurent Pelly’s productions on these pages quite a few times but this was my first time seeing his work live. Mr. Pelly’s costumes, co-created with Jean-Jacques Delmotte, and the sets designed by his regular collaborateur Chantal Thomas, originated with Dutch National Opera, have done a bit of traveling, and made a fitting local debut for all concerned. 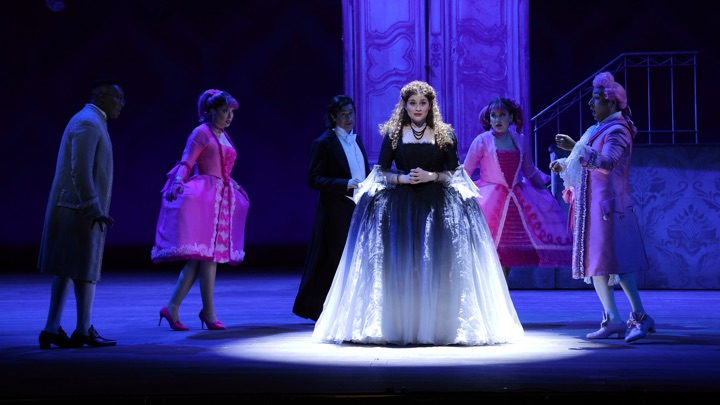 Also making local debuts were our Cenerentola (dubbed Angelina by the composer) Neapolitan mezzo Serena Malfi and South African Tenor Levy Sekgapane as the Prince Don Ramiro. They made a fleet and fetching pair of sweethearts but more of that anon.

They were surrounded by an uncommonly strong cast of singers regular to LA Opera and the more I attend the more I realize how management really works to create an artistic ensemble among the players depending on the composer naturally and who’s the best fit.

Ildebrando D’Arcangelo was nothing more than luxury casting in the role of Alidoro. Got up as a modern day un-housed person in his initial appearance which is something we Angelenos confront on a near-constant basis. The sympathy Angelina showed him countered by the not too comical scorn of her step-sisters made a sharp public commentary in context.

Later when his machinations are revealed he was suddenly decked out as a orchestra conductor, replete with baton, as he guided the participants in the story. It worked. Mr. D’Arcangelo’s bass is prime real estate for this wonderful little part and his warm voice brought much pleasure to a role not usually assigned to singers of his caliber.

The step-sisters, Cliorinda and Tisbe, were played to the absolute hilt as spoiled little blondes by LA Opera regular Erica Petrocelli and debutante Gabriella Flores. I’ve admired Ms. Petrocelli here in a number of roles, including Musetta, and her clear, strong, soprano gave the ensembles she was involved in their necessary brilliance. Ms. Flores’ contribution was equally appreciated and they both played off each other winningly with sharp comic timing all afternoon for the many sight-gags the staging entrusted them with.

Russian bass-baritone Rodion Pogossov was our Figaro in the Barbiere not too long ago and his elegantly comic turn as the Prince’s valet Dandini (who spends the majority of the opera actually disguised as the Prince) was full of energy. He also made some very comic moments out of the extraordinary demands of Rossini’s vocal writing. 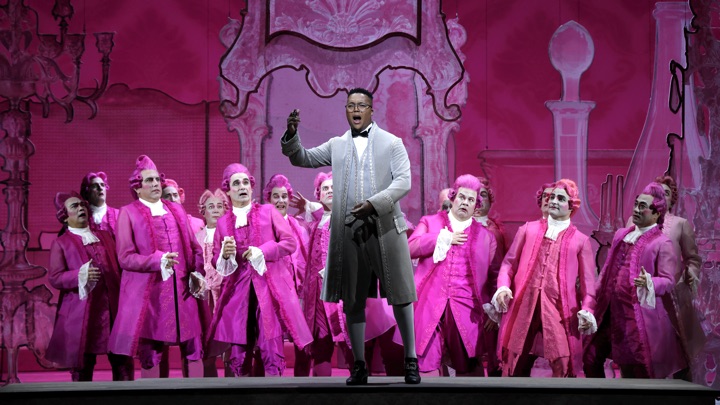 His entrance aria had an especially funny moment when he “ha-ha-ha’d” his way up and down a complete vocal scale not once but twice. Later when he revealed his true identity to Angelina’s father their duet was just as enjoyable for their vocal blending as their comic interactions.

Speaking of comic theatrical shtick, we were blessed with Alessandro Corbelli as Angelina’s father Don Magnifico. The Italian baritone’s gifts are so formidable that simply walking across the stage and sitting can elicit laughter. He’s holding all the cards when it comes to comic timing and business and he deals them out regularly along with the requisite Rossinian patter which was an astonishment in his opening aria.

There was also a hilarious bit in the Act II recitative worked out with the harpsichord player, Peter Walsh, where he caught a fly in mid-air and then crushed it under his shoe that I’d never heard, or seen, before. I’d go back for a whole performance again solely for this little moment. Bravo.

With such a strong ensemble our two leads were rightly the vocal standouts. First was South African tenor Levy Sekgapane as our Prince. Rossini was a voice teacher after all. Singing his music should be hard work but not necessarily difficult for someone who’s familiar with the style. It’s nearly like doing graduate level vocal exercises all evening.

Mr. Sekgapane has one of the most dulcet and beautiful tenore di grazia voices it has ever been my pleasure to hear. His pitch and support so faultlessly accurate, the voice so bright and fast, that there was never any “will he or won’t he?” nervousness that can come with some tenors in this repertoire. He capably dealt with the high tessitura of Don Ramiro’s vocal writing all evening and has a magnificent ring at the top of the voice.

In his big Act II Scena, “Sì, ritrovarla io giuro” he easily triumphed over every vocal hurdle placed in his path (and they are legion). He even paused in the middle section to dispatch a glorious pianissimo cadenza that brought gasps from the audience. I’ve heard tenors sing “piano,” mind you. But an actual “pianissimo?” I can’t recall.

One of my disappointments with Mr. Pely’s staging was placing Mr. Sekgapane on a moving stage wagon for this number and then rolling him off during his high-note finale. A). He should have his feet on solid ground and 2). He more than deserved the applause that ended up getting squelched from a confused audience as he disappeared into the wings.

Serena Malfi’s Angelina is already captured on video in a 2016 performance from Rome celebrating the works bicentennial. So this isn’t her first time to the ball and we were in exceedingly capable hands. She has a lovely clarinet-tinged sound with a formidable technique and certainly presents a sympathetic figure onstage.

That said, Rossini’s Cinderella isn’t necessarily such a stand out character in the context of the drama precisely because she’s so sweet and good. Musically her one recurring theme is the plaintive, “Una volta c’era un re.” Ms. Malfi was magic with Mr. Sekgapane in their Act I duet and alert and funny in all the mountains of ensemble work but she only gets to truly shine in her final rondo, “Non piu mesta,” which she certainly did.

She was fleet and accurate in everything she did and seemed to bring a darker, rounder, vocal color to her utterances at the ball. Most especially the lines regarding the two bracelets and their portent.

Mr. Pelly’s set and staging were problematic from the standpoint that there were multiple wagons populating the stage with the modern interior of Don Magnifico’s dilapidated home with it’s mostly 1950’s era furniture. The wagons at ascending heights filled all the wings on both sides of the stage and when they were simultaneously deployed it made for a very cluttered, and not very attractive, stage picture.

Beds, armchairs, breakfast table, armoires, washer and dryer, a bathtub and a toilet (which gratefully no one utilized), essentially piled on top of each other endlessly with precious little area left for staging. Meanwhile the scenes at the Prince’s palace were all represented by cut-out scrim drops of oversized candelabra and chandeliers in Schiaparelli pink.

It becomes clear during the finale that the palace scenes are actually all a fantasy of Angelina’s and she’s still in her grubby house dress as the stage clears of everyone to find her finally, as we first discovered her. with her bucket and mop. A sobering moment and certainly one contradicted by Roissini’s sparkling music.

I also have to mention that the Act II storm, which can be a wonderful divertissement, went for absolutely nothing

Who didn’t betray Rossini was the formidable conductor Roberto Abbado in the pit with the LA Opera Orchestra. I was watching an interview with a famous soprano recently where she talked about always trying to program a Rossini aria for her orchestral concerts. It helped her place her voice and the required flexibility got her well warmed up. Until it became apparent that the intricacies of conducting and playing Rossini’s music took up the majority of the rehearsal time and she eventually scrapped that notion.

Maestro Abbado had the orchestra clicking away in the pit like a well-oiled clock for the entire performance. Dynamics and accuracy were exemplary (all those crescendos!) and I’d be hard pressed to find fault in any portion. He followed and led the singers in such a way that the constant give and take only contributed to a very lively, and organic, performance.

The all-male chorus was riotous and clearly reveled in the amount of dancing and prancing they had to do over Mr. Pelly’s many stage wagons. In heels no less (!) as they were all dressed as royal courtiers of the 1800’s.

Waiting to take my seat after the first intermission an elderly gentleman next to me turned to his wife and said,”I can’t keep any of the characters straight?”, I looked at him and replied, “Too many baritones in disguise.” We laughed.