The second time around

While the formulaic nature of some of Rossini’s other operas can undermine his ability to balance bravura singing and playing with legitimate drama, a concert Maometto II proves, with what it offers as much as what it lacks, that the formula still works. 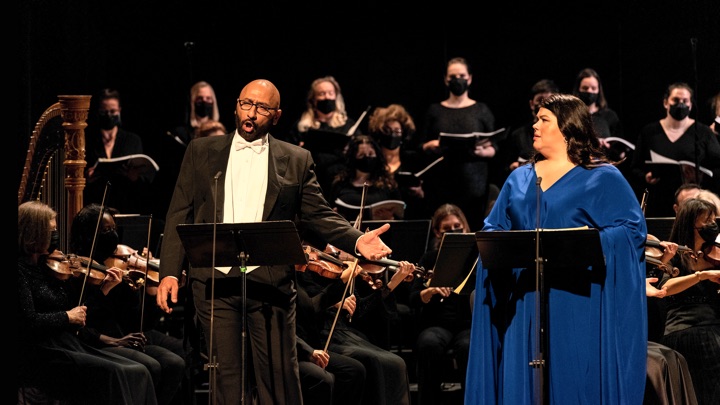 The drought of full-scale opera, scheduled to last until March, has made WCO’s elder statesman positioning on DC’s cultural scene evermore pronounced and its fall performance of a Rossini rarity, its first since 2019’s Hamlet, an even more prominent benchmark on the city’s classical vocal calendar.

And while it was nice to get back into the Opera House at the Kennedy Center for WNO’s Come Home gala earlier this month, this return was the more satisfying reunion: the third-Sunday-in-November performance date, information-dense paper programs in their distinctive Cambria font, jaunty conducting from WCO Artistic Director Antony Walker that compensated for the lack of action onstage, even George Washington University’s acoustically grim and aesthetically dreadful Lisner Auditorium seemed untouched by a two-year performance pause.

In fact, it seemed like the interstitial year-and-a-half between when Maometto was first announced and Sunday had only brought Walker deeper into this strange score (the critical edition prepared by Hans Schellevis and Philip Gosset for the 2012 Santa Fe revival), as he showed off an uncommonly sensitive ear for the opera’s subtle shifts in atmosphere both from the orchestra and the chorus.

If the score itself isn’t meaningfully different enough from Rossini’s other, similar conquest operas (Tancredi, Aureliano in Palmira, Ciro in Babilonia), to be a real revelation, many of its merits, like its fairly persuasive characters and its unsettling echo-chamber effect when invisible armies are exhorted amidst no staging, shine through in a presentation like WCO’s. 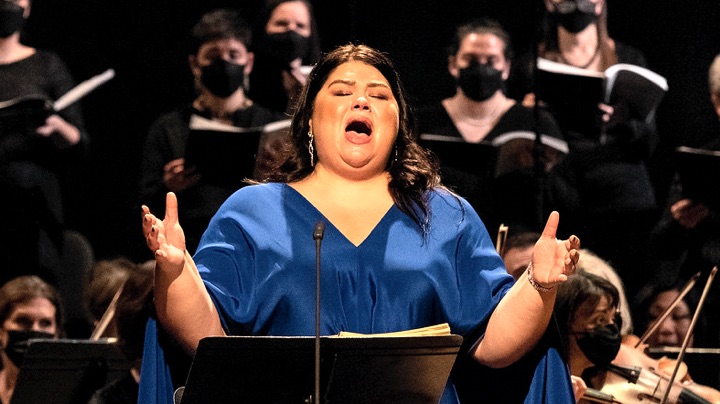 While the formulaic nature of some of Rossini’s other operas (and his infamous composition process) can undermine his ability to balance bravura singing and playing with legitimate drama, a concert Maometto II proves, with what it offers as much as what it lacks, that the formula still works. And subtle innovations in Maometto—the 25-minute “terzettone”! cannon fire! way fewer cabalettas than you might expect!—pique interest across a long and demanding musical evening.

Dramatically, the evening demands less because the story is actually, fairly refreshingly straightforward. As the Ottomans, led by Maometto (Mehmet II), execute their 1470 siege of Venetian Negroponte, the sultan is reunited with his ex-flame Anna Erisso, whom he once secretly loved under the name Uberto. However, Anna’s father, Paolo, is leading the Venetian resistance in Negroponte with the help of her suitor, Calbo.

Maometto, a rather unflattering caricature of a lecherous Muslim, will try to cajole Anna’s loyalties (and soothe her outrage at having been duped) for the ensuing two hours, she’ll agonize over what to do, her father and suitor-cum-husband will pass judgement, and she’ll ultimately disembowel herself, assumedly with a stylish jambiya, on her mother’s tomb.

If the story seems heavy on Anna in comparison to a literal textbook warlord, it’s probably because it was an Isabella Colbran role. Leah Crocetto stepped ably into it here, but as with the texty late-period Verdi she attempted in fall 2019 (Desdemona), the role’s textual and agility requirements turn her tone vinegary. With few opportunities to let the voice expand as it beautifully can into generous legato lines, like it did during the “Giusto cielo” prayer, Crocetto was somewhat diminished next to the more charismatic singers on stage. 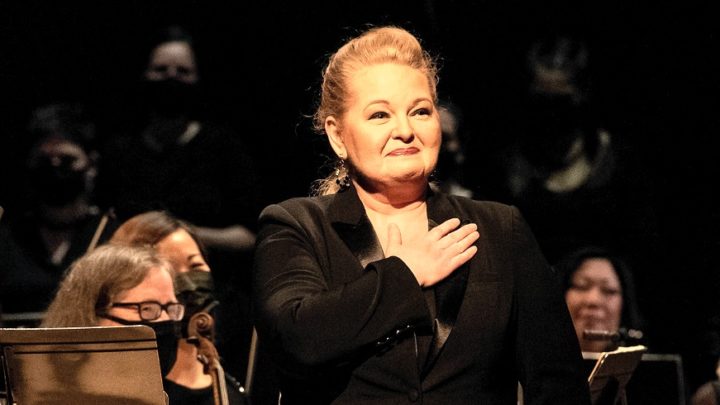 She did, however, find a pleasing blend bass Ashraf Sewailam in the title role (instead of Luca Pisaroni, who was announced in April 2020). His wooly bass may not be particularly distinctive, but his coloratura and legato technique is rock solid and the result was a strapping performance.

Legato, or even any subtlety at all, was in short supply from Bruce Sledge as the skittish Paolo, though his old-fashioned squillo and overarching idiomatic urgency almost made you forget. But it was Elizabeth DeShong as Calbo who indisputably walked off with the show. I have never heard her mellow, rounded tone more expressive, more rock solid at the extremes of her enormous range, more effortlessly nimble, or more unflappably elegant than she was on Saturday.

The Act II aria “Non temer” received showstopping applause as the most natural-fit Rossinian in the cast sang with such ease and flexibility. Especially in a role where the vocal line is consistently characterized by Fiordiligi-like jaggedness, she won the audience over and deservedly received the evening’s most overwhelming ovations.

Maybe the most significant pandemic-era change for Washington Concert Opera is its new general director, Tehvon Fowler-Chapman, who started just over a year ago. His earnest and enthusiastic welcome to any first-time operagoers at the top of the evening gallantly signaled what is hopefully a new, outwardly oriented era for a company whose admirable hallmarks—an unabashed on-bookness, disdain for theatrical presentation, and inventive casting—represent all the best of opera inside baseball.

But no company can coast on insider goodwill forever, and, fortunately, with a performance as solid and sensitive as this Maometto, and leaders as persuasive and in-command as Walker and Fowler-Chapman, WCO shows they know that better than anyone else. I can’t wait to see what’s next.