From an exposure standpoint, Ruth Bader Ginsburg was the best thing to happen to opera since Beverly Sills. 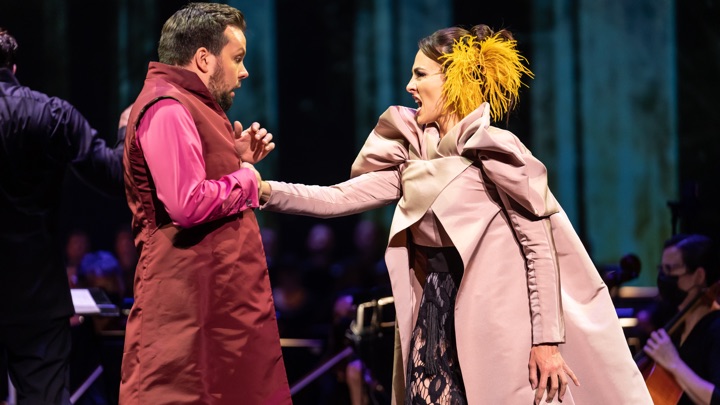 Washington National Opera, effectively the only presenter of large-scale staged opera in town, milked the affiliation for all it was worth during the Justice’s lifetime.

And so it would come to pass that, after the loss of RBG in September 2020 just ahead of a production of Fidelio mounted in her honor, the company would use its reopening to both pay tribute to her memory and welcome audiences back to a theatre that had been mostly dormant since March 2020. And given that this is the 50th anniversary of the Kennedy Center overall, a to-do was in order and a to-do was done.

If the heavy order of homages might have posed messaging challenges, WNO had the good sense to let the 2+ hours of music (with the occasional, brief video or speech spliced in, including a positively grandmotherly video address from absent Artistic Director Francesca Zambello) speak for itself. Divided loosely into “The Artist,” arias and ensembles about artists and performers, and, post-intermission, “Justice” and then “Liberty,” the evening of predominantly familiar favorites ended with a complimentary glass of bubbly in honor of Ginsburg’s legacy.

Evan Rogister, in only his second outing in the Principal Conductor role to which he was appointed in 2019, was beaming from the podium; while his overall approach tended towards the ponderous, there has never seemed a better time, after many fallow concert-going months, to wallow in an indulgent orchestral swell. The prelude to Meistersinger that began the program, accompanied by a slideshow of photos of the Center’s construction, made even this cynic misty with its grandiose sweep.

And Fate Now Conquers, an inventive and intriguing overture (and regrettably the only contemporary orchestral piece on the program) by Kennedy Center Composer in Residence Carlos Simon, was played with detail and verve. 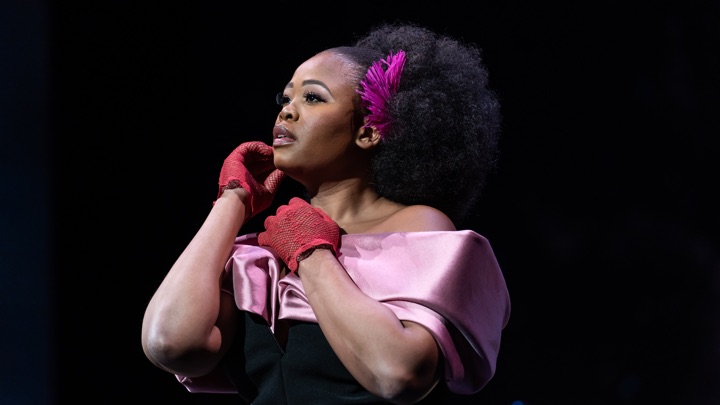 WNO imported a variety of singers for the occasion, a mix of debutants, familiar faces, and past and present Cafritz Young Artists. The evening was launched by Alexandria Shiner whose precise and steady soprano projected cleanly across “Dich teure halle,” her sound tinged with a vaguely covered, ‘distant’ effect (fans of Emily Magee will find much to like here) that saves such an imposing voice from being overwhelming.

Christian van Horn, though, overwhelmed in the best way: decked out in a red silk suit with a low-cut pink pussy bow top (more on that later), his singing, including as Dr. Miracle in the final scene of Hoffmann’s Antonia act, Nabucco’s Zaccaria post-“Va pensiero,” and Banquo’s recit and aria from Macbeth, made a meal out of each piece with suave, strapping, and pitch-perfect singing across generous phrases.

This is the type of singing I have most missed hearing live, and the Hoffmann trio was the evening’s strongest group assignment with Pretty Yende a clean, earnest Antonia and mezzo Rehanna Thelwell, the finest exponent of the Cafritz program since Daryl Freedman, made a deep impression as Antonia’s mother with a bracing, seductive singing.

Later on, Yende presented an introspective “È strano… Sempre libera” that won the evening’s longest single ovation; I have previously enjoyed her, but it took me this long to appreciate the uniqueness of her complex, grainy timbre and spontaneous yet precise coloratura attack. 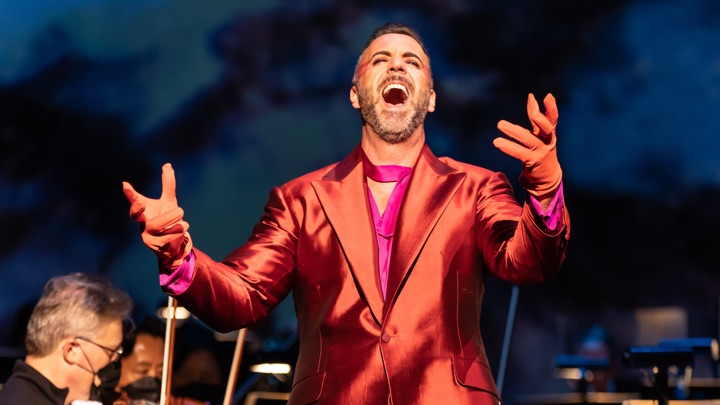 It was interesting to compare Yende’s bravura approach to Lawrence Brownlee’s – while agility still comes easily to him, it was undermined here by a distracting tendency (and one I haven’t previously known him for) to physically mark the runs. But as is his wont, Brownlee was the most charismatic artist of the evening.

With a darkened, distinctive tone, and ineffably crisp delivery, he has something to say about every note he sings and in one of the final excerpts, “Asile héréditaire” from Guillaume Tell, the torrents of gorgeous, plangent vocalism, supported by a cohesive-sounding WNO chorus, simply didn’t yield

Brownlee last appeared with WNO in 2018 for a charming Barbiere opposite Isabel Leonard, who returned for Come Home. But of the big names in Saturday’s program, she made the weakest impact. A strong start with a mixed belt in Jeanine Tesori’s “The Girl in 14G” gave way to a “Sein wir weider gut” that turned her limited mezzo increasingly pallid to the point of near collapse the lower the music went and a final scene from Carmen so bland it proved a depressing harbinger for when Leonard takes on the entire role for the first time here in May opposite Michael Fabiano.

I doubt a new costar will do much to change things; like Fabiano, David Butt Philip, Don Jose here, exuded white-knuckle intensity. The vocal goods are certainly there – he has a powerful, muscular tenor, a persuasive voix mixte that he deployed more successfully in Florestan’s aria from Fidelio than in the Meistersinger Preislied, and high notes that bloom beautifully. 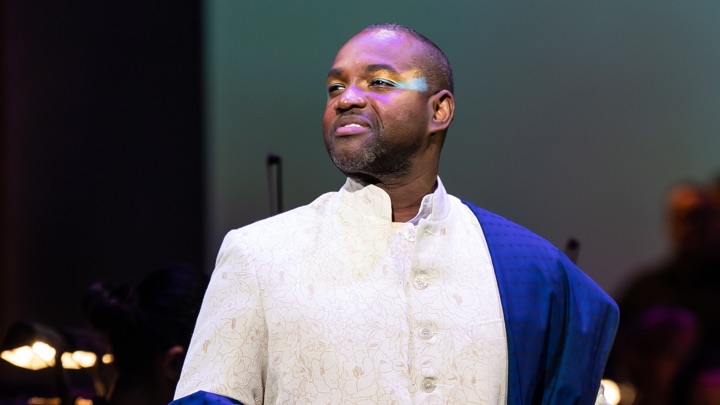 But a little subtlety would go a long way, and if he had occasionally taken his foot off the gas, the contrasts between the numerous aspects of his impressive voice would have been more vivid and ultimately more flattering.

Flattering, though, was an elusive goal when it came to dressing this cast. For the occasion, WNO called upon designer Bibhu Mohapatra to provide clothes (mostly flared sherwanis and gowns). Beyond the inexplicable dainty lace gloves and droopy pashminas most of the singers wore (later revealed as couture tributes to RBG), the outfits ranged from mildly unflattering to distractingly grotesque in both silhouettes and fabrics. I can’t remember if a performance has ever been so marred for me by eyesore “costumes,” but I was longing for boring evening wear from the first glimpse.

Outfits aside, WNO put on a high quality show with their return to the Kennedy Center’s Opera House. And while the company won’t reconstitute until the spring for the quartet of covid-era commissions entitled “Written in Stone” and their first staged opera in two years, Così, this went far to whet the spectacle-starved appetite of this Washingtonian. I’m sure Ruth was pleased.